Omar is a charming flirt. This active 3-year-boy has come a long way since the onset of a rare disease for which his family struggled to find a diagnosis and treatment. 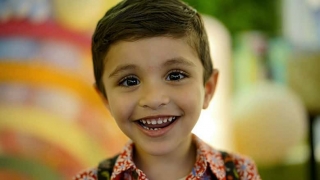 Omar’s first year could not have been more typical. A happy, healthy infant, he met all his developmental milestones, says his mother Zoohra, a primary care physician. That all began to change after his first birthday in May 2020, when Zoohra transitioned Omar from formula to cow’s milk.

Zoohra noticed that Omar began making unusual, jerking motions. They were not quite seizures but nonetheless alarming. It was the height of COVID-19 in New York City, and Zoohra and her husband Rahim had a virtual call with a neurologist to discuss Omar’s symptoms and schedule an electroencephalogram (EEG). Not long after their call, Omar had an acute episode, unlike anything he experienced before. “He was lethargic, unarousable and almost unresponsive,” says Zoohra.

Zoohra and Rahim rushed Omar to the emergency room of a New York City hospital. Omar was diagnosed with low blood sugar, also known as hypoglycemia, but the cause was unclear. His physicians initially thought he had a glycogen storage disease, a rare condition that makes it difficult for the body to store and use sugar, but it was eventually ruled out through genetic testing. Omar’s genetic test for hyperinsulinism (HI), a genetic disease that causes hypoglycemia, was also negative.

A long search for answers

Without a definitive diagnosis, Zoohra and Rahim were left in the dark. Zoohra was instructed to give Omar cornstarch mixed with water or milk to keep his sugar stable. Cornstarch is slow for the body to digest and can help regulate blood sugar. She gave the mixture to Omar every three hours, day and night, for the next three months, but his sugar was still too low, between 40 and 50, and he was putting on a lot of weight. It was unsustainable.

“He was getting 1,000 calories of cornstarch a day. These are artificial, empty calories with no nutrition. It was super-stressful,” says Zoohra.

Zoohra continued her search for a specialist who could help. An endocrinologist in New York suspected Omar had HI, despite his negative genetic test results and suggested the family seek immediate treatment at the Congenital Hyperinsulinism Center at Children’s Hospital of Philadelphia (CHOP). They drove to Philadelphia the next day and by that evening, after three months of searching for answers, the family had a diagnosis: hyperinsulinism.

“It was a huge relief,” says Zoohra.

The role of protein in HI 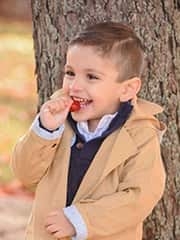 HI is a rare disorder in which beta cells in the pancreas create too much insulin. The overproduction of insulin causes low blood sugar, which can lead to seizures, brain damage and even death. While early detection is critical, Omar’s case is a bit unusual because he showed no signs of the disease during his first year, and it wasn’t until he transitioned away from formula that his blood sugars became unstable.

“Cow’s milk is high in protein, and kids with certain types of hyperinsulinism are sensitive to protein. Their blood sugar will drop without carbs to balance the protein,” says Zoohra.

There are two main forms of hyperinsulinism: focal and diffuse. With focal, the cells responsible for creating too much insulin fall into clusters that can be surgically removed from the pancreas, effectively curing patients. Omar has diffuse HI, which means he has overactive beta cells throughout his pancreas. Most patients with diffuse HI can be managed medically.

Omar was given diazoxide, the frontline medication, to stabilize his blood sugar when he first arrived at CHOP in August 2020. It worked for a period of time before he had an adverse reaction, which caused a severe drop in his blood platelet count. His care team, led by Katherine Lord, MD, Medical Director of the Inpatient Endocrinology Service, determined the best treatment for Omar was continuous dextrose (sugar water) delivered through a gastric tube (G-tube) that would be placed in his abdomen, along with an injection once per month of the drug lanreotide.

“As a parent, a G-tube is traumatic to think about — even though I’m in the medical field. It’s that the G-tube is something he needs to survive,” says Zoohra.

Zoohra credits Winnie Sigal, MD, attending endocrinologist, for sitting down with her and explaining why the G-tube was necessary and helping her get over her fears, as well as Dr. Lord and nurse practitioner, Heather McKnight, CRNP, for helping the family feel informed and supported.

“In retrospect, the G-tube was the best decision because it is all about stability,” says Zoohra.

CHOP trained Zoohra and Rahim on how to care for Omar’s G-tube. Zoohra checks Omar’s sugars at least two to three times a day with finger sticks. After a year of monthly shots of lanreotide, he transitioned off the medication and is now managed with only continuous dextrose (sugar water) through his G-tube.

“We always know that we have someone in our corner that will help us at all times. It’s so, so nice. You feel like you have a support team no matter where you are,” says Zoohra. 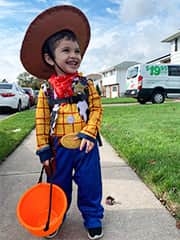 Omar comes to Philadelphia every three to four months to the outpatient HI clinic at the Buerger Center for Advanced Pediatric Care. He’s hospitalized once a year to assess his overall treatment plan.

Zoohra appreciates CHOP’s multidisciplinary approach and attributes it to Omar’s overall sense of well-being. He has seen a nutritionist and gastroenterologist as part of his care. Early on, he saw a psychologist to help him adjust to having a chronic illness.

Omar is very comfortable with the book bag he carries that contains a little pump that administers his continuous dextrose and the tube that runs from the book bag to his G-tube. It doesn’t slow him down.

“He’s a little daredevil on the playground. He wants to do everything. Omar is lucky because he doesn't have any neurological or developmental issues. The book bag is just an extra thing. He is thriving and doing well,” says Zoohra.

Some children outgrow the need for continuous dextrose by age 4 to 6 and can manage to keep their blood sugar in the safe range with diet modifications. Since Omar’s exact type of HI is unknown, it’s difficult to know how his disease will progress. Zoohra is looking at clinical trials through CHOP that may help transition Omar off his g-tube sooner. In the meantime, they are getting ready for pre-k in the fall.

“CHOP changed our lives,” says Zoohra. “We didn’t have a diagnosis for three months, and we got to CHOP and we had one in a day. We know we are in the best of care there. We feel lucky that we live so close. It’s where all the research happens.”