A few days after Tahilees excitedly told her 12-year-old daughter and close family that she was pregnant, she got devastating news. A first trimester screening at 11 weeks showed the fetus had a blockage in its urethra. Read about the family's journey from Brooklyn to find hope at CHOP. 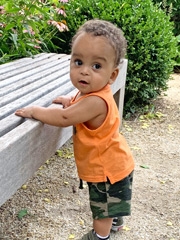 “I was terrified and heartbroken,” says Tahilees. Low amniotic fluid levels can result in underdevelopment of the lungs (pulmonary hypoplasia), a life-threatening condition. The obstruction can also cause back pressure on the kidneys, which can lead to kidney damage. “It was devastating to think that I would have to tell my daughter she wasn’t going to be a big sister.”

The maternal-fetal medicine (MFM) specialist at the hospital near Tahilees’ home in Brooklyn, NY, wanted to wait a few weeks to see if the blockage resolved on its own. If it didn’t, the MFM said the pregnancy might require intervention before birth.

The next few weeks felt like an eternity for Tahilees and the child’s father, Christopher. They hoped and prayed the blockage would resolve on its own. But an ultrasound at 17 weeks showed the condition had worsened. The bladder was even larger than before, and there was barely any amniotic fluid left around the fetus.

“I broke down crying,” recalls Tahilees. “The thought of losing my son that my family and I had already fallen in love with was distressing and incomprehensible.”

The MFM referred the family to Children’s Hospital of Philadelphia (CHOP) due to its experience treating babies with LUTO before and after birth. That day, Tahilees contacted CHOP’s Center for Fetal Diagnosis and Treatment and set up an appointment for an evaluation.

Within a week, Tahilees was in Philadelphia for a full day of tests. At day’s end, attending physician Mark P. Johnson, MD, MS, met with her to explain the diagnosis, treatment options and potential outcomes. The kidneys were still functioning. Fetal surgery offered the chance to salvage that function.

Fetal surgery for LUTO involves vesicoamniotic shunt placement. A shunt is a hollow tube that temporarily bypasses the lower urinary tract obstruction and provides an alternate passageway for urine to go from the bladder through the abdominal wall to the amniotic fluid space around the fetus. This allows for drainage of the urinary tract and bladder and establishes fluid around the fetus, which is necessary for lung development. Tahilees is a registered nurse and Christopher is also in the medical field, so they understood the dangers of compromised lung and kidney function and fetal surgery.

“From the first time I walked into CHOP’s Center for Fetal Diagnosis and Treatment I was given a sense of hope. I knew everyone would do everything in their power to help my baby,” says Tahilees. “CHOP was very transparent about the risks associated with fetal surgery. Dr. Johnson drew a diagram of what would happen during surgery and said there was the chance that the shunt could be dislodged, the amniotic sac could be ruptured, and the baby could be born with the kidneys or lungs not working. But there was also the chance he could be born and have some kidney and urinary issues but have a good quality of life. The thought of having to undergo surgery was terrifying, but we wanted to do whatever we could to give him the best chance at life. Aside from the fear, I felt very confident that I was in able hands.”

Tahilees underwent fetal surgery 19 weeks into the pregnancy. After a week of postsurgical follow-up to confirm that she and the baby were doing well, she returned home. She was monitored weekly by her local care team and had monthly follow-up visits at CHOP. At each visit to the center, the team was pleased to see that the shunt was functioning properly and the baby’s bladder continued to shrink down to its appropriate size.

Delivery and care after birth

Delivery occurred at 37 weeks of gestation via planned c-section in CHOP’s Garbose Family Special Delivery Unit (SDU), the world’s first birth facility designed exclusively for healthy mothers whose pregnancies are complicated by birth defects. Considering the risks and anticipation leading up to the baby’s birth, Tahilees and Christopher thought “Chance” was the perfect name.

Chance was stabilized and taken to CHOP’s Harriet and Ronald Lassin Newborn/Infant Intensive Care Unit (N/IICU), where a team of neonatologists, pediatric urologists and nephrologists assessed his condition and counseled his parents on what to expect in both the short and long term. His lungs were fine, but he had some kidney and bladder issues.

The shunt was removed and Chance underwent a vesicostomy, a procedure in which an opening is made below the belly button to allow the bladder to drain directly into a diaper. After two weeks in the N/IICU, he was able to go home.

Comfort from a distance

Chance is now 11 months old. He’s had some urinary tract infections that have landed him in the hospital, but he’s doing well otherwise. He’s a happy baby, says his mom.

Despite the distance, the family decided to keep Chance’s long-term Urology and Nephrology follow-up care with CHOP.

“The staff and care we have received and continue to receive at CHOP is like no other and worth the two-hour drive,” says Tahilees. “It’s the same team that followed him from his first days in the N/IICU. They know him best. They got to see him from day one. They schedule our appointments so we can see both teams on the same day, get back to me to answer questions, and follow up to see how he’s doing after clinic visits.”

A few months after birth, CHOP urologist, Aseem Shukla, MD, implanted a catheter, a thin, sterile tube, into Chance’s bladder. Dr. Shukla plans to gradually increase the size of the catheter tube in the hopes that it will expand Chance’s urethra and create a passageway wide enough for urine to pass so he can close the vesicostomy and
Chance can urinate naturally.

“Chance is such a strong and brave boy,” says Tahilees. “Even before he was born, he showed me strength and determination in myself that I didn’t know I had.”

Tara walked into The Children’s Hospital of Philadelphia when she was 17 weeks pregnant with Owen, who was prenatally diagnosed with a lower urinary tract obstruction. Look at him now. 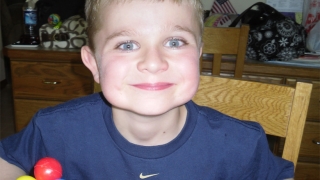 Mason was prenatally diagnosed with LUTO (keyhole bladder) and successfully treated with fetal surgery at CHOP. 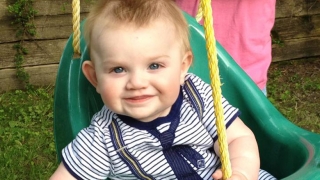 During a routine ultrasound, Tara and Travis learned that their baby’s bladder was the size of his head, indicating a serious birth defect.