When Luelle was prenatally diagnosed with spina bifida, the prognosis was not good. Doctors told her parents it was unlikely she'd ever be able to walk, would need a shunt for hydrocephalus, and would have major bowel and bladder problems. Six years later, Luelle walks, runs and jumps, doesn't have a shunt, and continues to amaze her doctors with her progress.

Shelly and Bobby were excited for their 18-week ultrasound. The Boston couple planned to have the ultrasound tech write the baby’s sex on a piece of paper and then they would read it together over a celebratory breakfast after their appointment.

But the gender of the baby soon became the least of their concerns when they learned the daughter they were expecting had myelomeningocele (MMC), the most common and severe form of spina bifida. In MMC, the spinal column doesn’t close all the way, leaving an opening in the back. It can cause paralysis, bladder and bowel problems, and cognitive impairments. 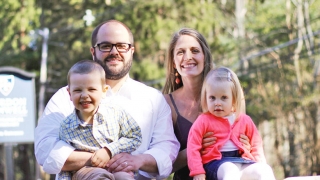 Fortunately, their physician told them about an option that offered hope: fetal surgery, a relatively new and extremely complex procedure. Fetal surgery for MMC can help minimize damage to the spinal cord, increase the likelihood that a child will be able to walk, and decrease the need for a shunt tube to drain excess fluid from the head.

After doing a lot of research, the couple turned to the experts at Children’s Hospital of Philadelphia’s Richard D. Wood Jr. Center for Fetal Diagnosis and Treatment. Center team members are among those who invented the MMC fetal surgery procedure and have been performing it for nearly 20 years. Within four days of the diagnosis, Shelly and Bobby were en route to Philadelphia to see if they qualified for fetal surgery.

Shelly’s and Bobby’s experiences from that initial evaluation through delivery of their daughter Luelle are chronicled in a three-part documentary series that aired on PBS in the spring of 2015. “TWICE BORN: Stories from the Special Delivery Unit” follows four families from across the country as they face the prenatal diagnosis of birth defects and make decisions about life-changing procedures.

The first day of filming was a little weird, says Shelly, but it soon just became part of their lives. 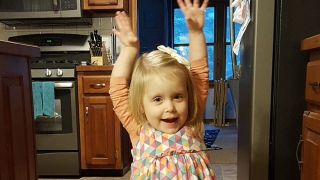 “It ended up being a place to process what we were going through,” she says. “After we got the diagnosis we watched every video we could find, and it was just so encouraging to hear real people’s experiences. Knowing that someone could watch this in the future and feel that same kind of encouragement, I was so excited to be able to offer that to other people.”

Luelle’s initial prognosis was paralysis from the waist down, urinary and bowel issues, and club feet. She also had evidence of mild hindbrain herniation — a condition in which part of the brain descends into the upper portion of the spinal canal in the neck — but it initially wasn’t severe enough to qualify her for fetal surgery.

Within a month, the couple returned to Philadelphia for a fetal MRI, which found that the hindbrain herniation had progressed. It was threatening to cause hydrocephalus (accumulation of fluid in the brain), which can injure the developing brain. Luelle was now a candidate for fetal surgery.

One step at a time

Two days later, surgeons performed the fetal surgery, closing the hole in Luelle’s spine while she was still in the womb.

“It was terrifying,” says Shelly, recalling the worries she had about the serious complications she and Luelle could suffer and the possibility of early delivery. “But we just took it one step at a time.”

The surgery was a success, and Shelly and Bobby remained in Philadelphia, first in a hotel and then in the Ronald McDonald House, with weekly appointments at CHOP. But at 34 weeks, Shelly developed complications and had to be admitted to CHOP’s Garbose Family Special Delivery Unit (SDU) for 24/7 monitoring.

“The staff were incredible,” Shelly says of her stay in the SDU, the first unit of its kind in the world. “I’ve never had that level of care. That was huge, especially going through a life-changing thing. They cared about us beyond it being their job, and I know that takes an emotional toll.”

After almost three weeks in the SDU, Shelly gave birth via a cesarean delivery. Luelle was born weighing a healthy 6 pounds, 12 ounces. She spent just one week in CHOP’s Newborn/Infant Intensive Care Unit (N/IICU) before heading home with her parents to Boston.

“When I think about this whole process, I’m just really thankful for all of the people we met because of it," says Shelly when reflecting on their experiences along the way. "Though our journeys and outcomes are all different, traveling this road together is such a gift. The families we’ve met have become like family.” 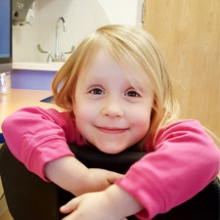 Luelle — whose name means light — is now almost 6 years old and is doing "better than we ever imagined," according to her mom.

“She walks, runs and jumps,” says Shelly. “She doesn't have a shunt, has no bowel or bladder issues. She's dealt with a few challenges, but very minor.”

Luelle was delayed a bit verbally, but has caught up to other kids her age. And though she has a little bit of weakness in her feet, which resulted in some delays with crawling and walking, she hasn’t required braces. She sees specialists at a spina bifida clinic near her home twice a year for baseline scans, but she has “surpassed the odds,” says her mom.

One nice early spring day, Luelle insisted her mom take her on a "real run on the road." She wanted running clothes and a headband like her mom, and she earned it, running about a mile alongside Shelly. "She kept saying to me, 'great running, girl' and is so excited to do it again," says Shelly. "I will always be humbled remembering this precious girl wasn't supposed to be able to walk, and now she's running with me."

"She has no idea the gifts she's been given," says Shelly. "I do, and feel honored to carry them until one day I can share them with her. One day I will tell her the story about the beautiful scar that she calls her 'bifida.' I will tell her of all the incredible people that we've met, all the challenges she's overcome, and the countless things we have to be thankful for." 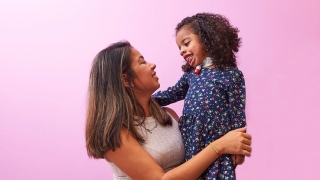 A Leap of Faith

Lesly was 12 weeks pregnant when doctors spotted an enormous tumor growing from the baby’s mouth. See how Lilly, now 4, is doing today. 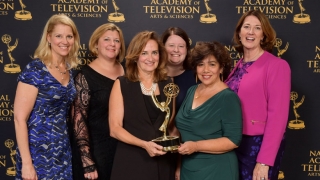