Three-year-old Brynn loves to run in circles around the dining room table, and is happy to be a silly, active kid. She’s able to do so thanks to a series of surgical procedures that corrected a rare combination of heart defects.

Joelle and Matt were expecting their first child when Joelle volunteered to be a subject for training by a new cardiologist at her obstetrician’s ultrasound practice. The cardiologist conducting the training informed the couple that the images showed a potential problem with their baby’s heart, possibly a minor aortic stenosis — a narrowing of the aortic valve.

“It didn’t sound significant,” Joelle remembers. “We figured maybe it was just a mistake in learning how to use the equipment. We were in complete denial.”

Joelle and Matt wanted a second opinion, and their obstetrician referred them to Marie Gleason, MD, a cardiologist with Children’s Hospital of Philadelphia (CHOP) who is Director of CHOP’s cardiac outpatient operations in Pennsylvania. Dr. Gleason performed a fetal echocardiogram and then coordinated care with Jack Rychik, MD, Director of the Fetal Heart Program.

The team recommended that Joelle deliver at CHOP’s Garbose Family Special Delivery Unit (SDU), the first birth facility in a pediatric hospital designed for healthy mothers carrying babies with known birth defects. Moms can stay close, and babies are treated immediately after birth without having to be transported between hospitals.

The first in a staged series of surgeries

One month later, Brynn was born in the SDU. She needed immediate medical attention, and was taken from the delivery room to the Cardiac Intensive Care Unit. When she was 5 days old, Brynn had her first procedure in a staged series of surgeries. Thomas Spray, MD, performed the Norwood procedure to connect Brynn’s abnormal aorta to her main pulmonary artery, and then provide blood flow to the lungs with a shunt. Additionally, the severely leaking mitral valve was partially oversewn.

“Dr. Spray was open and honest with us when he described the procedure,” Matt remembers. “We appreciated that, even though it led to a scary few hours.”

The surgery went well and there were no complications. Two weeks later, Joelle and Matt brought Brynn home.

For the next six months, the family participated in CHOP’s Infant Single Ventricle Monitoring Program. The program closely monitors babies with heart defects between the first and second of a staged series of surgical repairs. Data has shown that this is the period in which these children are at greatest risk. Through the program, Joelle and Matt documented key metrics — how much Brynn ate, her weight, her pulse oximeter readings, even diaper changes. They sent the information to a dedicated nurse practitioner at CHOP every week, and every other week a nurse examined Brynn at their home.

Brynn had the second stage of her surgical heart repair, called the hemi-Fontan or Glenn procedure, when she was 5 months old. During this surgery, the superior vena cava — a large vein that carries deoxygenated blood from the upper body into the heart — is disconnected from the heart and attached to the pulmonary artery.

This operation also went well, and Brynn went home after seven days. She needed supplemental oxygen through a nasal cannula for a few weeks, but otherwise was a normal baby. She sat up and crawled on schedule, and was a good eater.

Over the next two years, Brynn hit key developmental milestones but was experiencing challenges. She tired easily from any exertion, and over time that problem grew worse. By the time she was 2½ years old she couldn’t run from one side of the room to the other without getting winded.

With her stamina worsening, it was time for the third stage of Brynn’s heart repair, the Fontan operation. During this surgery the inferior vena cava, a large vein that carries deoxygenated blood from the lower body into the heart, is channeled through the heart with a tube up to the pulmonary artery. After this operation, all of the deoxygenated blood from the body goes to the lungs without passing through the heart. Dr. Spray performed Brynn’s Fontan operation in early July, six weeks before her third birthday. Once again, Brynn responded well.

Describing Brynn’s recovery, Joelle says, “She’s knocked it out of the park.”

Even right after the surgery, Joelle says, “She came out with a glowing face. Her lips had always been purple. The tips of her fingers and toes were purple. Now the look of her was different. It was dramatic.”

Running circles around her parents 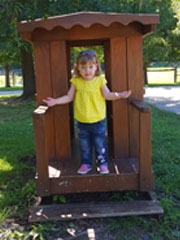 Brynn was released from the Hospital after eight days, and a month later is loving her newfound energy and stamina. “She runs in circles around the dining room table,” Joelle says. “She can finally enjoy being a silly, active kid.”

Joelle and Matt elected to enroll Brynn in CHOP’s Cardiac Kids Developmental Follow-up Program, where she sees therapists and a neuropsychologist as a part of her cardiac care. The family is aware of the connection between heart problems and neurological issues, and views the program as a source of support and extra level of screening to monitor and address any developmental problems that might emerge as Brynn grows. For now, Brynn has shown no developmental issues, and she even surpasses her peers in some developmental areas.

“We owe everything to CHOP. You go there knowing you're being seen by the best.”