Kylee is a happy, spunky little girl who loves playing with dolls, painting, coloring and spending time with her older siblings. Today, she’s a happy, normal 5-year-old thanks in large part to a heart transplant at Children’s Hospital of Philadelphia (CHOP).

CHOP isn’t the only thing on Kylee’s thank-you list. Five years ago, Susan and Ed received a call from their foster care agency about a 5-week-old baby.

A few weeks later, when Kylee was ready for discharge, Susan and Ed traveled to Children’s Hospital of Philadelphia. Kylee had been born in the Garbose Family Special Delivery Unit, the first birth facility in a pediatric hospital designed for healthy mothers carrying babies with known birth defects.

They met with Kylee’s medical team, which was led by cardiologist Marie Gleason, MD. She explained HLHS is treated with a series of three reconstructive surgeries, where surgeons perform a series of open heart procedures over several years. Kylee had the first of these procedures, the Norwood procedure, when she was 3 days old.

Over the next few days, they were trained in Kylee’s care, including managing her feeding with a nasogastric (NG) tube, monitoring the oxygen levels in her blood with a pulse oximeter, and weighing her regularly to track her growth.

When she was 6 months old, Kylee had the second staged surgery, the Glenn procedure. Performed by Stephanie Fuller, MD, who had done Kylee’s first procedure, this second operation redirected the flow of deoxygenated blood from the upper body to Kylee’s lungs, bypassing her heart. Kylee also underwent a catheterization procedure, placing a stent to widen one of the veins connecting the Glenn shunt to the pulmonary (lung) artery. Before she was discharged, Kylee’s medical team also placed a gastrostomy feeding tube to help with feedings.

After being discharged, Kylee received physical, occupational and speech therapy at home, and made steady progress. She learned to roll over, then crawl, then walk. And if that wasn’t enough good news, when Kylee was 2 years old, Susan and Ed finalized her adoption.

Heart failure and plans for transplant

When Kylee was 3 1/2 years old, Dr. Gleason, in consultation with Dr. Fuller, determined it was time for the third of the reconstruction surgeries, the Fontan procedure. While the surgery went well, Kylee developed another heart problem, a leaky tricuspid valve, which was affecting her circulation. Several surgeries were conducted to repair and then replace the failing valve, and a pacemaker was placed to help assist her heart.

At a follow-up appointment with Dr. Gleason, an echocardiogram showed Kylee had severe heart failure. She was admitted immediately for what turned out to be a 2 1/2 month stay. Susan and Ed were introduced to the Heart Failure and Transplant Program team, and Kylee was placed on the transplant list. Kylee had surgery to place a ventricular assist device (VAD) to improve her cardiac output as a bridge to transplant.

“At first, her recovery from the VAD surgery was hard,” Susan says. “She was weak.” But with time, Kylee regained strength and was able to walk around the hospital and then outside with the VAD in a backpack. The family credits art therapy, music therapy, and moments of play with the nurses as motivation. Susan and Ed were trained on how to manage the VAD and how to spot potential issues before Kylee was discharged.

“We’ve found her a heart”

Four months later, Kylee and Susan were waiting in the Cardiac Catheterization Laboratory at CHOP for a diagnostic procedure. “Then, members of the heart failure team came into the room. They said, ‘We’re going to cancel the cath — because we’ve found her a heart!’” says Susan.

The next morning after surgery, Kylee had a new heart.

Kylee’s recovery was relatively fast and easy. The four months on the VAD had allowed her to rebuild her physical strength. And now she had a healthy heart. Two weeks after the transplant, she was able to attend an annual prom event CHOP puts on for patients. She was given a dress and rode down to the dance in a wagon. A week later, she was discharged. Kylee was healthier than she had been in her entire life.

“A few months later, we got to enjoy summer together. Kylee was able to go swimming. She could run and play.” 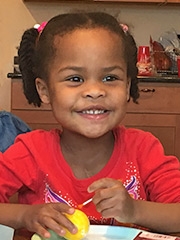 Now 5 1/2 years old, Kylee loves to play with her baby dolls. She enjoys painting and coloring, playing in the water, and spending time with her older siblings.

“She’s spunky,” says Susan. “Yet she can be really sweet. She loves to snuggle.”

Kylee returns to CHOP for periodic follow-up visits and occasional tests to make sure the transplanted heart is doing well. Her health continues to be strong.

“We’re grateful to be where we are with her,” says Susan. “CHOP has been our home away from home. It’s an incredibly caring place, a wonderful place where a whole lot of struggle goes on and miracles happen.”