This year, as he begins ninth grade, Callum is bringing to the classroom, and to life, the maturity and focus that helped him get through the past year — the most difficult he has experienced.

Last September, as he started eighth grade, Callum’s neck became swollen and lumpy. It was so pronounced that several friends at school asked what was wrong. His parents took Callum, then 13, to a local doctor, who diagnosed mononucleosis.

In the next several weeks, Callum’s parents, Tara and Michael, become increasingly concerned. They took him to Luv Javia, MD, an ear, nose and throat surgeon at The Children’s Hospital of Philadelphia (CHOP).

After examining Callum’s neck, Dr. Javia said he was concerned about the swelling in the lymph nodes. He wanted them to see an oncologist. 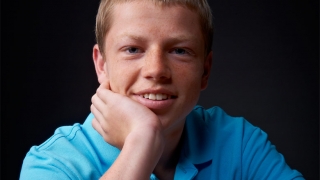 Dr. Javia made a phone call, and two days later the Hardings saw CHOP oncologists Tracey Jubelirer, MD, and Julie Stern, MD, and the team at the CHOP Specialty Care Center in King of Prussia, PA.

After chest X-rays and other tests, Dr. Jubelirer told the family she and Dr. Javia would recommend lymph-node biopsy. One possibility, she told them, was lymphoma, and the only way to get a definitive diagnosis of lymphoma is biopsy.

Two days later, a Friday, Callum was admitted to CHOP for surgery. Dr. Javia removed three lymph nodes and sent them to pathologists for evaluation. On Tuesday, Dr. Jubelier called the family. It was Nov. 13, 2012, the day Callum was diagnosed with cancer: Hodgkin lymphoma.

Tara remembers that time as incredibly scary and confusing. But from the start, the team at CHOP helped the family stay strong.

“You feel incredibly alone on the day that you get the diagnosis,” Tara recalls. “We didn't understand his illness or what paths this could take us down.

"Callum’s team stood with us the whole way through. They completely understand your concerns and your tears and when you feel like your world is spiraling out of control, they're absolutely there to hold you," she adds.

The week after Thanksgiving, Callum began chemotherapy. He received the drugs as an outpatient at CHOP King of Prussia, going through four chemotherapy cycles over five months.

It was a difficult time. Callum was not able to attend school frequently, but kept up with his schoolwork. He was admitted to CHOP's Main Building in Philadelphia several times for close monitoring when he became ill. Through it all, Callum maintained his sense of humor, joking with the doctors, nurses and other patients.

He also stayed on-point as caring older brother to three siblings. “He is the head of the children,” Tara says. “He maintained that even when he was at his sickest.”

And Callum’s intelligence and inquisitive nature were not affected, either.

One of his chemotherapy drugs, doxorubicin, is red and causes tears and urine to turn red. Callum wondered why the drug is red. The nurses took him back to see David Dallago, PharmD, the pharmacist at King of Prussia who tailors chemotherapy doses for each patient.

Dr. Dallago explained that the drug is red because it is derived from a bacterium found in soil (streptomyces peucetius), and it is this organism that is responsible for producing the red pigment.

Callum was fascinated. Though the work of pharmacists is of utmost importance to their patients, often the two never meet.

“He brought me into the back room where they make the chemicals and stuff and it was just a great experience,” Callum says. “It really showed how cool it is and how much you can help someone without even seeing them or knowing who they are.”

Care and support from all

Callum began stopping back to see Dr. Dallago during his visits. The pharmacist explained each drug given to him during treatment and why it is prescribed for Hodgkin lymphoma.

For Tara, the time Dr. Dallago has taken to answer Callum’s questions and encourage his interest in science exemplifies the depth of care the CHOP oncology team provides.

“When we were here at CHOP as patients and family, we were given everything, every kind of support we could need,” Tara says. “My son was always first and foremost and then we were taken care of right behind him. I came here terrified and I was supported the whole way through, just as my son was.”

Callum’s family will always remember the day Dr. Stern told them he was officially in remission.

“I felt a physical weight come off my chest and then this whole future open up for all of my family, for Callum and all of our children,” Tara recalls.

For Callum, who is now 14, the future has been informed by his experience as a cancer patient.

“There are actually a lot of great experiences that have come from this, like meeting new people, going to new places, like knowing more about hospitals and stuff like that,” he says.

Callum was a Patient Ambassador for the 2013 Four Seasons Parkway Run & Walk. The annual event raises money for the Cancer Center at CHOP.

“We don't want to stop giving back, not just to CHOP but to all the children who will keep coming through these doors,” Callum’s mom says. “We want them to keep having all the faith and hope that Callum received from here.”

Join their team, Cure for Cal, or make a donation.