Juwan was 12 when his mother, Andrea, first noticed signs that something might be wrong. He was having trouble breathing, became winded easily, and was losing weight. His pediatrician told her not to worry. The breathing troubles were probably a result of his asthma, he explained, and Juwan was a small child to begin with. 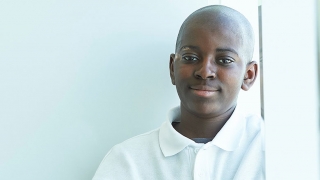 This went on for months. By December 2015, Juwan had lost 25 pounds. He had always been an athlete and was a drummer in the marching band, but could no longer walk up a flight of steps without getting winded.

“I hounded his doctor to do a blood test and a chest X-ray,” Andrea remembers. But she couldn’t convince him that the problem was serious. Finally, in April 2016, Juwan’s health reached a crisis point. He came down with pneumonia, and the antibiotics didn’t help. After a week of medication, his fever was 104 degrees.

Andrea carried Juwan into the emergency room at their local hospital. At 13, he weighed just 68 pounds. An X-ray showed a large tumor in his chest.

Juwan was immediately transferred to Children’s Hospital of Philadelphia (CHOP), where additional X-rays were taken. “Within an hour an oncologist came down and spoke to me,” says Andrea. The oncologist was Bhavya Doshi, MD, who told Andrea that Juwan had Hodgkin lymphoma. In addition to the large tumor in his chest, he had smaller tumors in his lymph system.

Unable to breathe, suffering from a high fever, and now with a diagnosis of advanced stage cancer, Juwan was admitted to CHOP’s Pediatric Intensive Care Unit (PICU). Treatment with chemotherapy began that day.

A plan for treatment

It was in the PICU that Juwan and Andrea first met Susan Rheingold, MD, an attending physician with CHOP’s Cancer Center who has special expertise in lymphoblastic leukemia and the treatment of adolescents and young adults. Dr. Rheingold took charge of Juwan’s cancer treatment, as part of a medical team that included Julian Allen, MD, Chief of CHOP’s Division of Pulmonary Medicine and Director of the Asthma Program, and Bhavya Doshi, MD, a pediatric hematology-oncology fellow.

Juwan went through five cycles of chemotherapy, from his admission to CHOP in April through his 14th birthday in late July. He continued with radiation therapy in August and September, and he managed to schedule that around band camp.

Juwan would go to band camp from 8 a.m. to 4 p.m. every day, then his parents would take him to CHOP for treatment. Only the band director knew that Juwan had cancer. When Juwan didn’t have the strength to march, he was allowed to put his drum on a stand and play on the sidelines.

In September, in recognition of Childhood Cancer Awareness Month, the family told the rest of the band about Juwan’s disease. Andrea sewed gold ribbons on all of the uniforms in preparation for breaking the news. “Juwan was very calm about it,” says Andrea. “He asked people to treat him normally.”

A PET scan (positive emission tomography) in October showed that the cancer in his chest was not responding, and there was additional evidence of cancer in Juwan’s lymph nodes. Starting in November, he began another round of chemotherapy in preparation for a stem cell transplant.

Juwan received his stem cell transplant in late February 2017. In May, tests showed no evidence of the disease. In the year since his diagnosis, his weight has doubled.

Throughout his treatment Juwan maintained very good grades, and was named to the National Honor Society. Unable to go to school in person through the spring of 2017, he attended math and Spanish class using Skype and Facetime. Teachers in other classes shared recordings of lessons and sent notes and assignments home with Juwan’s siblings. A condition of National Honor Society membership requires Juwan to tutor other children, which he has also done through Skype and Facetime.

In addition to keeping up with his studies and playing in the band, Juwan initiated a book drive for Children’s Hospital of Philadelphia. He used social media and other channels, including the Leadership Council for African American Students at his school, to spread the word. His parents joined the effort by asking for donations from colleagues and his mom’s sorority.

At the end of the year, Juwan delivered an incredible 12,000 books to CHOP. The new books went to the Cancer Center, where sterile conditions were required, and used books went to other units and CHOP’s satellite locations throughout the region. He’s now leading a second book drive, and plans to run this as an annual event.

Juwan has been an inspiration to his family and his community. “He’s taught me a lot about life,” says Andrea. “He told me, ‘When you almost die and you get another chance, you look at things differently.’ He appreciates life. Things that looked very bad at the time turned out to be learning experiences.”

Juwan’s older brothers are doing better in school, in part because of his example. And Andrea was encouraged by his book drive to organize her own ways to give back to the community.

The family is thankful for the expert care CHOP has provided to Juwan. “Being at CHOP gives you a complete sense of peace,” says Andrea. “They are the most patient, understanding people you will ever meet. They listen. They understand that I know my son. I did everything I could as a mother to get him there. Once he was there, I knew he was in good hands and I could relax.”