Alexa is a happy and confident young woman who has a passion for acting and singing. She’s a regular performer in her high school theater productions. But that confidence didn’t always extend off the stage. Until recently, she navigated her social interactions with a hidden dread — that others would notice and be repelled by her sweaty hands. 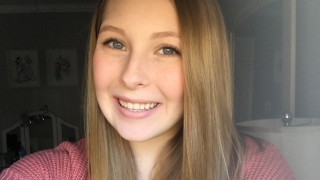 Alexa had a condition called hyperhidrosis, which caused her hands to sweat excessively. Most people are accustomed to occasional sweat on our hands when we are hot or nervous. For people with hyperhidrosis, that sweating never stops. It occurs regardless of the temperature or emotional situation, and can be excessive, leaving pools of moisture on anything they touch.

For Alexa, that meant awkward explanations whenever she needed to shake or hold hands with someone — as she often did during theater performances. It meant messy written papers and tests when her wet hands smeared her writing and wrinkled the paper. It meant apologies to her piano teacher for leaving puddles on the piano keys.

Alexa had the condition since she was a baby. It always bothered and embarrassed her, but she pushed through the difficult situations. It wasn’t until she was 16 that she even realized it was a condition, and that it had a name.

Taking the first step to finding a solution

When Alexa turned 16, she started learning to drive, but her wet hands made it hard for her to get a secure grip on the steering wheel. Suddenly the problem was not just a social issue but also a safety issue, and the family decided it was time to take action.

Alexa was the one who took the first step. “I searched online for ‘sweaty hands,’” she says. “And I found a name for it: hyperhidrosis. The articles described exactly what I was going through.”

Her parents helped her take the next step, making an appointment with a dermatologist. That turned out to be less than satisfying. She prescribed creams, which didn’t work. “They left my hands crusty and scaly, but didn’t stop the sweating,” says Alexa.

The dermatologist then discussed other remedies, including periodic injections of Botox and an oral medication that could modify the signals the brain sends to the hands. But all the options she suggested came with serious risks: swollen hands from the Botox, the possibility of neurological changes from the oral medication.

“She basically sent Alexa on her way, with no answers,” says Alexa’s mother, Shannon. But the family wasn’t willing to give up. With a name for the condition, Shannon continued to research other options and found that a potential solution was close at hand. The family lives in southern New Jersey, and Shannon found that Pablo Laje, MD, a pediatric surgeon at Children’s Hospital of Philadelphia (CHOP), has expertise in hyperhidrosis and had successfully performed surgery to cure it.

Alexa was reluctant to consider surgery, but she welcomed the chance to meet with a doctor who knew about her condition and who could give advice based on his experience with other patients.

Shannon made an appointment for Alexa to meet with Dr. Laje. “He went over many of the same options the dermatologist had,” says Alexa, “plus one more: surgery.” The procedure Dr. Laje described, thoracoscopic sympathectomy, interrupts the nerve that sends signals to stimulate the sweat glands in the hands. It requires just two small incisions below the armpit. The procedure is relatively simple, has a quick recovery, and for most patients permanently corrects the problem.

“Dr. Laje sat with us and explained everything,” says Shannon. “He took time to answer all of our questions.”

“He just made me feel so comfortable about it,” says Alexa.

The family went out to dinner that night and discussed what Dr. Laje had told them. Shannon let Alexa know that it was her decision. By the end of the meal she had made up her mind to go ahead with the procedure. “The benefits outweighed the risks for me,” she says. “I knew there were the normal risks of surgery. But the benefit was that I wouldn’t have sweaty hands.”

Alexa came to CHOP for the surgery on a Friday in December, just a few months after she learned the name for her condition. As soon as she woke up from the anesthesia, she could feel that her hands were dry.

“I was ecstatic,” she says. “I was telling everyone, ‘My hands are dry! Feel my hands! They’re dry!” She went home the next day, and was back to school and her normal routine on Monday.

When asked what’s different for her now, she answers, “I don’t have to think about wet hands anymore. Writing is so much easier. I was just in a play and I didn’t ever have to think about how I would wipe my hands during the performance, or how the other actors would react when we held hands. I could just act naturally. It’s a big relief.”

Situations that were once awkward moments to get through are just normal activities now, thanks to her surgery. Alexa can now let her natural poise and self-confidence shine, without being held back by those sweaty palms.