In Jenny Luu’s nine years of life, she’s seen plenty of ups and downs. For one thing, she loves gymnastics, so she’s often flipping and somersaulting. On the not-so-fun side, her blood sugar levels vary up and down, sometimes wildly. 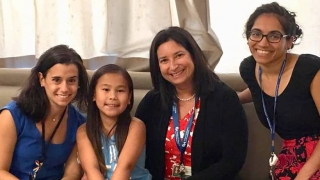 Jenny with Congenital Hyperinsulinism Center team members The fluctuations are not that unusual for a child like Jenny, who had to have a near-total pancreatectomy as a baby to treat congenital hyperinsulinism (HI). HI occurs when the beta cells in the pancreas create way too much insulin, which drives sugar to dangerously low levels. In Jenny’s case, she had the diffuse type, meaning she needed 98 percent of her pancreas removed to control her HI.

A few years later, Jenny developed diabetes. But unlike the more typical type 1 or type 2 diabetes, which has a more predictable pattern and management plan, diabetes after pancreatectomy for HI presents unique challenges.

“We check her sugar constantly,” says her father, Lary Luu. It’s a task made easier by the continuous glucose monitor (CGM) she uses. “It will be 200 and then, 15 minutes later, it’s down below 90.” Normal glucose (or sugar) levels are about 100 mg/dL. “Sometimes it’s stable, sometimes it’s not. Sometimes, when the monitor sends us an alert, we have to wake her up at night to give her juice to bring it up.”

These ups and downs motivated the Luus to enroll Jenny in a research study of a “bionic pancreas” at Children’s Hospital of Philadelphia (CHOP). Jenny spent four days in the hospital last summer wearing the device, which aims to automatically manage blood sugar.

Current diabetes technology requires testing of blood sugar with test strips and a glucose meter, and then calculating the dose of insulin, administered with a needle, insulin pen or insulin pump. Each meal, patients have to count how many carbohydrates they plan to eat and take insulin to “cover,” or counteract, the carbs. If blood sugar drops too low, they must eat or drink something sugary to bring it up. The bionic pancreas aims to do all that thinking, calculating and adjusting automatically.

“It worked wonderfully,” Luu says. “We can’t wait for it to get FDA approval so she can use it all the time.”

The study at CHOP is currently limited to patients with diabetes post-pancreatectomy for HI and is scheduled to run through mid-2019. (Other institutions are studying use of a bionic pancreas in people with diabetes.) There are still multiple steps to finish before the Food and Drug Administration can give its approval.

“This is such an exciting study,” says Diva D. De León-Crutchlow, MD, MSCE, Chief of the Division of Endocrinology and Diabetes, and Director of the Congenital Hyperinsulinism Center, who is leading the study. “For our patients, especially, the bionic pancreas could be a game-changer, and we could not do this research without them. We are always inspired by the willingness of our patients to participate in research.”

Journey to diagnosis began in Vietnam

Jenny’s path to CHOP had its own ups and downs. The plan was for Lary and Nga Luu to have their baby in Delaware. But, during a trip to Vietnam to visit Nga’s family during the pregnancy, little Jenny had other plans.

“We were supposed to be home from our vacation before she was born, but she came early, at 34 weeks,” Lary says. Not only was she premature, Jenny also suffered from severe low blood sugar.

“They knew nothing about hypoglycemia in the hospital in Vietnam,” Lary says. “They knew she had low sugar, but they didn’t know what do about it. We put sugar in her formula and fed her every hour to bring her sugar up. That was all we could do.”

Despite urgently wanting to return to the United States for a diagnosis to explain Jenny’s hypoglycemia and to receive better care, it wasn’t until Jenny was 3 months old that she was stable enough to fly back, and her journey to a diagnosis continued.

The family’s local hospital was stumped and sent Jenny to a nearby children’s hospital, which referred her to the HI Center at CHOP when she was 4 months old. She was diagnosed with HI in March 2009. “In Vietnam, they don’t even know about HI,” Lary says.

Surgery the only treatment option

Jenny was discharged on a feeding tube and went through a “honeymoon period” for about three years when the remaining portion of her pancreas secreted an appropriate amount of insulin to give her normal sugar levels. She was diagnosed with diabetes when she began having hyperglycemia. Her diabetes is managed at a hospital near her home, with consultation from De León-Crutchlow, and the family travels to CHOP if needed.

Her current diabetes devices — a CGM and insulin pump — restrict her activities. She would love to participate more formally in volleyball, softball, cheerleading, swimming and gymnastics. Luu says he is hopeful she will be able to once the bionic pancreas gets the green light from the FDA. He’s glad CHOP is hard at work to improve Jenny’s life.