Most families that have a baby with congenital hyperinsulinism (HI) go through a time of fear, uncertainty and frustration before learning about the condition and how to treat it. 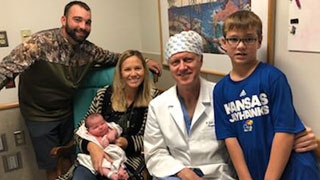 But when Valerie Windsor of Independence, Kan., a small town in the state’s southeast corner, gave birth to Lily on Oct. 2, 2017, and Lily’s blood sugar registered a seriously low 25, Valerie and husband Devin were composed. The delivery room team calmly and immediately started Lily on dextrose and sent her to a much bigger hospital in Kansas City. The family waited in the NICU there, Lily’s blood sugar managed, until they could come to the Congenital Hyperinsulinism Center at Children’s Hospital of Philadelphia (CHOP).

Once at CHOP, Lily underwent a 98 percent pancreatectomy. No worries. Not quite ho-hum, but anxiety was low.

It was a different story when the family’s older son, Landon, was born nine years ago. After a normal pregnancy and delivery — or as normal as it can be when your baby weighs 12 pounds, 1 ounce and is 23 inches long — delivery room clinicians immediately knew something was amiss.

“He didn’t cry out,” Valerie remembers. “They checked his blood instantly and his sugar level was 16.” Yes, 16! This is an extremely low level even for a newborn.

Dextrose was started on the spot, but wasn’t enough to boost Landon’s sugars into the normal range. The small local hospital quickly life-flighted him to the closest regional hospital, in Wichita, Kan., where it took doctors there three weeks to figure out Landon had HI.

“They had never seen a congenital HI baby before,” Valerie says. “They didn’t know anything about it or how to manage it.”

That’s when the Windsor family was first introduced to CHOP. The initial trip was scary because Valerie and Devin didn’t know what to expect. Once in Philadelphia, after a medical flight accompanied by a CHOP nurse who was specially trained in maintaining Landon’s glucose levels, they began to understand HI and the path to restoring Landon’s health.

Surgery the only option

Charles Stanley, MD, the founder of CHOP’s HI Center, explained that because front-line medications diazoxide and octreotide could not manage Landon’s glucose surgery was the only option. Surgeon-in-Chief Scott Adzick, MD, MMM, performed the near-total pancreatectomy.

While at CHOP in 2009, Valerie and Devin underwent genetic testing that showed they both were carriers of mutated ABCC8 genes, meaning that each pregnancy had a 25 percent chance of producing a child with HI. In 2015, when they were pregnant again, Valerie had an amniocentesis and their daughter, Ava, did not have HI. Before Lily was born, they did not have an amniocentesis but, knowing the odds, were prepared if she did have HI.

Lily was evaluated by the current director of the HI Center, Diva D. De León-Crutchlow, MD, MSCE, and then followed Landon’s lead. She had a 98 percent pancreatectomy, also performed by Dr. Adzick. “Dr. Adzick makes such clean scars,” Valerie says admiringly. “You can hardly see Landon’s, and Lily’s has already healed very nicely.”

Care after surgery has been different for the children, however. Landon needed no medication or glucose after he was home. He had a four-year honeymoon period when his glucose was controlled by diet. Around his fourth birthday, his sugar began to rise and he developed diabetes. He now manages his glucose with insulin delivered via an insulin pen.

Diabetes hasn’t slowed Landon down. He plays baseball, football, basketball and golf. His care is overseen by a pediatric endocrinologist in Wichita. His A1C, the measure of long-term sugar levels, has been steady.

Lily, so far, requires a low level of continuous dextrose to keep her sugar levels in the target range. She was fitted with the MIC-KEY button while at CHOP, and receives dextrose through a g-tube connected to a backpack that is always with her. “We’re hoping she won’t need it once she begins to crawl and move around more,” Valerie says. “We expect her to eventually go the other way and need insulin when the remaining 2 percent of her pancreas stops working. But we’ll manage no matter what.”

The family’s first experience at CHOP, and the training in how to check Landon’s blood, made caring for Lily much less stressful. “We know what to do,” Valerie says. “We know how to test her glucose level, how to factor in her feeding. It’s been easier this time around.”

The same expert care from the HI Center team, the transport nurse, the surgical team and all the nurses in the Harriet and Ronald Lassin Newborn/Infant Intensive Care Unit who are accustomed to caring for HI babies was evident in 2009 and in 2017.

The most recent visit included more guidance and help for Valerie about breastfeeding from CHOP’s Breastfeeding and Lactation Program. She pumped while in Philadelphia, made easier by a loaner hospital-grade pump CHOP made available at their hotel, so Lily could benefit from the medicinal value of breast milk. Then CHOP facilitated sending a cooler full of Valerie’s excess milk back to Kansas. “It arrived home about the same time we did,” she says. “It was a big help to have that stockpile.”

If Lily’s sugars remain low, there’s a possibility that she could be back in Philadelphia to see if octreotide will keep her in the safe zone to eliminate the use of dextrose throughout the day.

Valerie says, “Here, we’re always having to explain what congenital HI is since doctors have never had an HI patient before. We tell doctors to get in contact with CHOP so they know what they’re doing with Landon and Lily. CHOP continues to be a great resource for us.”