Dancing is in Lily’s blood. From the age of 4, she has enjoyed a multitude of styles, from jazz and tap to hip hop and contemporary. But a routine school scoliosis screening led to dire predictions about her dancing future from doctors in Alabama.

Lily and her family refused to accept defeat. They sought experts across the U.S. with proven track records of successfully treating young athletes with scoliosis and restoring their ability to compete. They found excellent care and life-changing spinal surgery at Children’s Hospital of Philadelphia (CHOP). 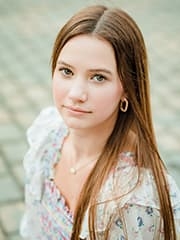 Lily, 16, traveled from Alabama for scoliosis treatment at CHOP. Lily was in fifth grade when she first learned she might have idiopathic scoliosis. An orthopaedic doctor in Alabama confirmed the diagnosis and recommended bracing to slow the progression of deformity.

“We started bracing when Lily was 10,” says Becky, Lily’s mom. Doctors recommended the pre-teen wear the hard-plastic brace to sleep each night. The brace extended from Lily’s hips to armpits. Even though it was uncomfortable and sometimes painful, she was committed to wearing it.

After four years of progressive bracing, Lily’s spinal curves continued to worsen – affecting her function and posture. For dancers like Lily, posture is key to positions like to plié and arabesque, yet she found it harder to retain the rigidity needed for extended periods.

When Lily was 14, doctors in Alabama were no longer talking about if Lily would need spine surgery, but when. They cautioned she would have to give up dance after surgery – as her flexibility would be severely compromised – dashing her hopes of continuing dancing into college and beyond.

Frustrated by the lack of options in Alabama, Becky talked with a friend whose child also had scoliosis. The friend recommended they seek a second opinion at Children’s Hospital of Philadelphia.

Dr. Flynn examined Lily, reviewed X-rays completed at CHOP and compared them to images taken over the past four years. Dr. Flynn told Lily and her mom that Lily’s spinal deformity had reached dangerous levels. The “S” shaped curve in her back held two large-angle curves: a 76-degree curve at the top of her spine, and a 67-degree curve (going the opposite direction) on her lower spine. 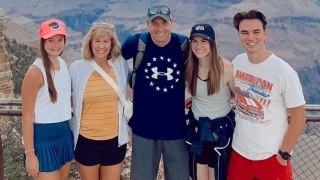 Lily (left) was supported by her family as her scoliosis worsened in adolescence. Pictured with her are (from left) mom Becky, dad Jason and siblings Taylor and Trent. Lily would need surgery – and soon. Her spinal curves were increasing about 2 degrees per month. The longer they waited, the more challenging her condition would become. Bracing alone was no longer effective; surgery was recommended.

For most teens, spinal fusion is the standard of care to treat scoliosis – and what had been recommended in Alabama. Lily’s family worried a complete fusion would limit her ability to dance.

Dr. Flynn heard the concerns of Lily and her family and proposed a customized solution for Lily: a spine deformity correction with a selective fusion. The hybrid procedure would better meet Lily’s personal goals: correcting the spine deformity and retaining the flexibility she needed for dance. Lily and her family were on-board with Dr. Flynn’s surgical plan and surgery was scheduled.

About six weeks later, Dr. Flynn performed the complex spine surgery on Lily at CHOP’s Main Hospital in Philadelphia. Dr. Flynn was able fuse the top part of Lily’s spine, permanently straightening it; the technique caused the untouched curve in her lower spine to respond by decreasing from 67 to 22 degrees. The lower part of her spine was corrected, but not fused, and therefore retained its flexibility.

The first two months after surgery were challenging, Lily and Becky agree. Though Lily could stand and walk soon after surgery, sitting in a chair was harder – and more painful especially for the first few weeks. Over-the-counter pain medication and rest helped, but time was a crucial factor in her recovery, as well as support from family and friends.

“Mistakenly, I thought it would all be better in a few weeks,” Lily says. “Really, it was about two months before I could start physical therapy and another month before I felt strong enough to start dancing again.”

Once PT started, Lily’s recovery sped up and she was able to start dancing again. Four months after surgery, Lily tried out for her school’s varsity dance team – and was selected as an upcoming sophomore! The team performs locally at football and basketball games, and pep rallies; and competes at regional and national dance contests and conventions. Five months post-op, she was able to dance in her studio’s recital – two nights of dress rehearsals and four consecutive shows – all with no back issues.

Lily demonstrates her advanced flexibility and dancing skills a few months after treatment at CHOP. Photo courtesy of Deanna Harrington Photography. Today, 9 months after surgery, Lily feels like she’s a stronger dancer – and her instructors have noticed an improvement in her form, style and stamina. “Her technique is better, her shoulders aren’t falling forward anymore, her balance is better,” says Lily’s mom.

Adds Lily: “It took a little time to relearn how to balance myself and get my brain and body working together again.”

Lily has made tremendous strides in her recovery, thanks to support from her family and the dedicated team at CHOP.

“Dr. Flynn and Theresa [C. McIntosh, MSN, CRNP], were so kind and compassionate – especially during the dark days when we first got back home,” Becky says. “They gave us hope that she would feel better, look better and be better – and she is.

“This was the hardest thing Lily has ever had to do, but because of the team at CHOP – who always responded promptly and took our concerns seriously – we felt supported even though we were 1,000 miles away,” Becky added.

“Surgery gave us our Lily back and gave Lily her passion back – and for all that, we are forever grateful to CHOP.” 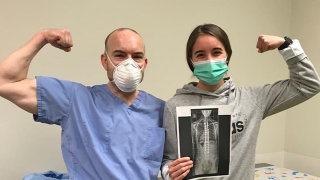 Scoliosis surgery at CHOP allowed Kristi to keep up her active lifestyle in ways she never thought possible. 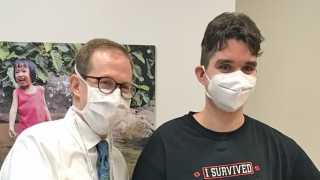 Successful spinal fusion surgery in June 2020 helped Shane get back to the activities he loves. 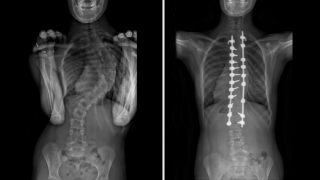