“It was a beautiful moment … for like two seconds,” James recalls of his daughter’s birth. Isla’s rib cage was too small to allow her lungs to develop fully. She couldn’t breathe normally. Three weeks passed before genetic testing confirmed a diagnosis of Jeune syndrome, a rare, genetic, life-threatening condition that affects the skeleton. 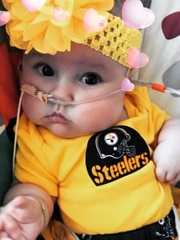 Rachel’s prenatal screenings were normal and she carried her daughter to term. But when Isla was born, doctors noticed that her arm bones were short and her ribcage was small. Five hours later, Isla started to turn blue.

When Isla was born at a local hospital near her family’s Northern California home, she was placed on a ventilator and transferred to a newborn and infant intensive care unit (N/ICCU). Doctors there had no experience with babies like Isla, so James and Rachel consulted with geneticists. The specialists suspected Jeune syndrome, an autosomal recessive disorder also called asphyxiating thoracic dystrophy. Children whose parents carry the gene mutation have a 1 in 4 chance of being born with the disorder. Six days after Isla’s birth, a blood test came back positive.

For Isla, the condition caused thoracic insufficiency syndrome (TIS), a complex condition that involves chest wall deformities. Isla’s thorax — the part of her body that includes the spine, ribs and sternum — would not be able to keep pace with her lung growth, and her condition would worsen over time.

As Isla grew, it became apparent she needed a higher level of care than was available at their local hospital. So, at 5 weeks old, she was transferred to a larger facility 48-miles away from home. A resident there recommended James and Rachel consider vertical expandable prosthetic titanium rib (VEPTR) surgery for their daughter. In VEPTR surgery, an expandable titanium rod is implanted into a child’s back and chest and anchored to the spine and ribs. As the child grows, surgeons expand the device. The rod helps straighten the spine and separate ribs so the lungs can grow and expand as the child grows.

The Wyss/Campbell Center for Thoracic Insufficiency Syndrome at Children’s Hospital of Philadelphia (CHOP) is one of only a few hospitals in the nation that offer this special surgery. Though nearly 3,000 miles from home, James and Rachel knew they had to get their daughter there.

The family flew to Philadelphia on a medically equipped jet and met with Orthopaedic Surgeon Patrick Cahill, MD. Their plan was to fly back home after the consult, but Dr. Cahill noticed the area of C1 on Isla’s spine was rigid. He recommended Isla to a neurosurgeon who performed a laminectomy, a surgery to relieve pressure on the spinal cord.

James and Rachel noticed an improvement in their daughter right away. Prior to the surgery, Isla was so nauseous that she would throw up two to three times a day. In the four months after surgery, Isla vomited just once.

The first of two VEPTR surgeries was scheduled for a little over a month after the family first arrived at CHOP. Dr. Cahill implanted the titanium rods on the right side of Isla’s rib cage. Because of her young age, Dr. Cahill would wait three months to attach the rods to the other side.

The surgery went smoothly and Isla was moved to the progressive care unit (PCU) to recuperate. She was extubated after the third attempt and cleared to fly back to California just over a month after her VEPTR surgery.

In March 2018, Isla returned to CHOP for her second surgery. In June, she returned to her home hospital in California. James travels to the hospital each day and stays with Isla until she falls asleep at night. They work on her physical skills with floor time, he reads books to her, and they play and dance together. Since the VEPTR surgery, Isla is relying less on outside breathing support.

Isla will fly back to CHOP once or twice a year for adjustment surgery until she stops growing. “We just want her to be a normal, functioning child once her lungs get to a point where they’re working correctly,” James says. “Hopefully by age 2 or 3 she’ll be off the support and a regular cute little kid who doesn’t remember all of this stuff.”