Mia loves to dance. A month after her liver transplant, she was able to walk up on the stage during her dance school’s recital while the dancers around her performed in “Mighty Mia” T-shirts. Now 12, Mia dances with the team. They continue to wear the shirts for the final number of each recital to celebrate her recovery and to raise money for Children’s Hospital of Philadelphia (CHOP). 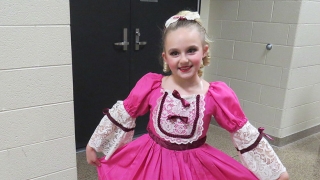 Just before Christmas in 2015, Mia and her two brothers, Vincent (her twin) and Nathan, got sick with the flu. Vincent and Nathan got better after few days. Mia didn’t bounce back as quickly. She continued to complain of feeling nauseous and wasn’t eating.

“It seemed like her stomach was blocked,” remembers her mother, Emily.

At Mia’s second visit to the pediatrician, she had blood work done. The results suggested a problem, so she was sent for an ultrasound near the family’s home in West Chester, PA, which showed a tumor in her abdomen. She was transported to Children’s Hospital of Philadelphia (CHOP) where Mia was evaluated by oncologist Frank Balis, MD, from CHOP’s Cancer Center. Additional scans and a biopsy determined that she had a cancerous tumor (a sarcoma) the size of a baseball growing into her liver.

The tumor was embedded in her liver in a way that would make it difficult, and perhaps impossible, to remove with surgery. The family was told that the treatment plan would start with chemotherapy to reduce the size of the sarcoma. Then, Mia might need a liver transplant.

In addition to Dr. Balis, her medical team expanded to Charles Phillips, MD, a fellow in Oncology, and members of CHOP's Liver Transplant Program: Elizabeth Rand, MD, a pediatric gastroenterologist who is the Medical Director of the program, and transplant nurse practitioners Rachel Goldberg, MSN, Kathleen Anderer, MSN, and Rebecca Miller, MSN. CHOP’s Liver Transplant Program is one of the largest pediatric liver transplant programs in the country.

Mia received four rounds of chemotherapy at CHOP, each lasting for three to four days and spaced 21 days apart. Mia maintained her good spirits. She kept up with school through a combination of voluntary home visits by two of her teachers and classes given by a nurse when she was in the Hospital. The family credits their deep support system during this time. When they came home from the first hospital visit, they found the whole front yard decorated in pink. When Mia was at CHOP, she received a steady stream of visits from friends. Her two grandmothers rarely left her side.

A liver transplant for Mia

After the final round of chemotherapy in April, the tumor had shrunk. However, it still couldn’t be safely removed, as it was too deeply entangled in the vital structures of Mia’s liver. A liver transplant was the only way to remove her cancer.

A month later, a liver was ready for Mia. Surgeons Kim Olthoff, MD, and Abraham Shaked, MD, performed the transplant, an 11-hour procedure that lasted through the night. Two days later, Mia was able to sit up in a chair, and after a week she was released to go home.

“When we got home, I knew everything was going to be OK.”

“She still didn’t have her hair from the chemotherapy, but she was starting to act more like herself,” remembers Emily.

Mia spent the summer recuperating. Her energy started to come back in August, and she was able to start school on schedule with her fifth-grade class that fall. 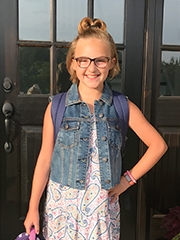 In her initial return to dance, just a few weeks after the surgery, her school put on a recital in which all of the dancers in the final routine wore “Mighty Mia” T-shirts. Mia couldn’t dance with them yet, but she stood on stage with her friends during the performance.

It has become a regular event for the dancers to wear 'Mighty Mia' shirts during the closing number of each annual spring recital. The school and Mia’s family have sold hundreds of the shirts, with the proceeds donated to CHOP.

Now 12, with the transplant almost two years behind her, Mia is very involved with dance. She does ballet, tap and contemporary dance, practicing or attending classes four to six days a week. She is on her dance school’s company team, which involves extra practice sessions and performances. And she’s proud to dance in the school’s annual recital.

Mia goes back to CHOP every three months to meet with her oncologists, Drs. Balis and Phillips, and every six months to the Liver Transplant Program. Tests are done to ensure she remains free of cancer and that her liver is working well.

“We look forward to the visits,” says Emily. “We like seeing the people, and they are clearly happy to see Mia. They come over and hug her and ask her how she is doing.”

The family is appreciative of CHOP’s continued multidisciplinary approach to care and for the relationships that they have built during their experience.

“We’re grateful for how everything turned out and for all of the people who supported us through it all — family, friends and the people at CHOP,” says Emily. “Dr. Balis is amazing. He has such wisdom and such a good manner with kids. Mia has really taken to him. The nurses are wonderful. And the child life specialists made it as normal as they could. I don’t think we would have gotten through without that support.”