The path of managing Dante Kladouras’ hyperinsulinism has been a twisting road. His case didn’t fit into any traditional pattern, but the experienced doctors of CHOP’s Congenital Hyperinsulinism Center — working side by side with his parents — found a treatment that has kept him safe. 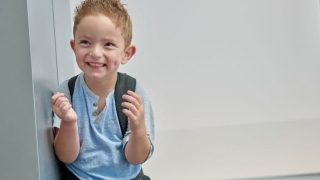 He was gaining weight and doing well at home when, on April 24, as his mother, Kija, held him, he turned bright red, then blue, holding his breath and staring. He then took a couple deep breaths and his color came back.

A blood test in the emergency room showed his blood glucose level at a dangerously low 35 mg/dL. Dante was immediately admitted and his lows were managed with IV dextrose while doctors searched for the cause. High insulin levels pointed to hyperinsulinism, and he was treated with diazoxide, octreotide and feedings via a nasogastric (NG) tube, keeping his blood sugar steadily in the mid-60s. Doctors said he was ready to be discharged.

Search for answers leads to CHOP 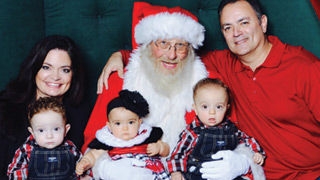 By then, Kija’s own research showed her “CHOP was THE place for HI,” even though it was across the country from their San Diego home. She spoke with an HI Center nurse practitioner, who told her that CHOP’s protocols didn’t indicate discharge with sugar levels in the mid-60s. Then Dante threw up, dislodging the NG tube. Within 45 minutes, his blood level dropped to 37. “That’s when I told the doctor, ‘We need to go to CHOP,’” Kija says. “I wanted to know I brought Dante to the best place with the best doctors with the best knowledge.” They came to Philadelphia via medical flight on May 22. Genetics testing indicated Dante’s HI was diffuse, but an 18F-DOPA PET scan showed the whole tail of Dante’s pancreas “lit up like a Christmas tree,” Kija says. “We were joyous thinking it was focal disease and he could be cured by surgery.”

But it wasn’t so simple. Surgeon-in-Chief N. Scott Adzick, MD, MMM, warned it didn’t look like a typical focal lesion; the tail was too bulbous. “Dr. Adzick is the one who called it,” says Chris Kladouras, Dante’s father. In about 5% of PET scans, what appears to be focal turns out to be diffuse disease.

Pathology didn’t show focal disease either. Dr. Adzick ended up removing 40% of Dante’s pancreas. Post-surgery, Dante still had low glucose. But the family and doctors decided on medical management vs. a second surgery for a near-total pancreatectomy. “With the tail and its abnormal concentration of beta cells gone, we’re hoping he’ll be less affected by HI and even outgrow it,” Kija says.

Since front-line medication octreotide made him sick, he was discharged on continuous dextrose infusion along with tube feedings and bolus dextrose if needed to keep his sugars at a safe level. Kija was trained in how to manage the pumps, and they went home after five weeks at CHOP.

While medically managing Dante’s HI is challenging — especially with two other babies around — it has allowed Dante to stay safe and keep 60% of his pancreas, which could mean he won’t eventually develop diabetes and the lifelong complications that come with it.

“If we have to do something difficult for a few years for him to avoid diabetes, I’ll do it,” Kija says. “He’s still a really happy baby — even when I check his blood sugar 12 times a day,” Kija says. “He smiles all the time.” 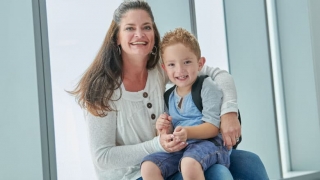 Managing Dante’s hyperinsulinism continues to be a team effort that includes his family, the HI Center at CHOP and his California pediatric endocrinologist, Susan Phillips, MD, at Rady Children’s Hospital San Diego.

Together, they’re learning more about just how special — and complex — Dante’s case is. Because he still has 60% of his pancreas with overactive beta cells releasing too much insulin, he still requires dextrose via a g-tube to combat his hypoglycemia.

“I manage him month to month,” Dr. Phillips says. “Sometimes we hit a wall, or we don’t make the type of progress we hoped to make. Then I find it very helpful to reach out to Dr. Katherine Lord, CHOP’s inpatient endocrinologist. We email, we talk. She’s very helpful and always provides good suggestions regarding the management of difficult problems.”

Now 5 years old, Dante isn’t fazed about wearing his medical backpack, which carries the dextrose, most the time. “He plays T-ball, and if his alarm goes off when he’s in the field, he just comes over and says, ‘I’m beeping, Mommy.’ We fix it, check his blood sugar and he’s back playing,” Kija says.

Still, everyone wants him to be free from the backpack during most of the day and to reduce his intake of dextrose overall. The trick was making it happen.

His management is complicated because the usual medications — octreotide and lanreotide — didn’t have the expected effect on him. Dr. Phillips has Dante wear a continuous glucose monitor and noticed constant fluctuations overnight as he received both dextrose and formula feeds. The dextrose and the formula were, in effect, fighting each other. She suspected he was protein sensitive, meaning his sugar dropped in response to eating protein.

She also knew CHOP’s reputation as a top center for the care of patients with HI with well-established and safe protocols for controlled fasting tests and for detecting protein sensitivity. She felt it was the best place for Dante to undergo the testing that would point to the best treatment path forward.

“Dr. Phillips went to California Children’s Services, Dante’s insurer, and advocated for us to go to Philadelphia,” Kija says. “She went above and beyond to make it happen.”

Dr. Phillips says, “I told them CHOP was the best place for Dante to go to complete the needed testing. I informed CCS that CHOP has a long history of leadership in the treatment of HI and that it provides not only testing but, importantly, it also provides comprehensive nutritional education regarding the findings to the families and treatment recommendations to the referring provider.”

Once CCS approved the visit, Kija coordinated Dante’s inpatient stay at CHOP to coincide with the September 2019 Hyperinsulinism Family Conference, held at CHOP. “He loved being with all the other kids who also have a backpack and g-tube,” Kija says.

Dante’s medical stay was also a success. He came home on about half the amount of dextrose he had been on before. His is also able to disconnected some days from his dextrose backpack for up to 10 hours.

“With HI, each day is very different, so we never know if we will be able to disconnect or for how long,” Kija says.

The protein tolerance test at CHOP confirmed Dr. Phillip’s hunch Dante was protein sensitive. The nutritionist helped Kija learn how to create meals that provide an optimal mix of carbohydrates and proteins so the protein does not provoke hypoglycemia.

“He has a new lease on life,” Dr. Phillips says. “There is so much more untethered time.”

That gives Dante the freedom to ride his new bike and keep up with this brother during hip-hop dance class. Dr. Phillips calls the partnership between herself, Dante’s family and CHOP a “trifecta” that is delivering optimal care for Dante.

“A lot of providers won’t send patients to quaternary referral centers because they feel they’ll lose control,” Dr. Phillips says. “That’s not how CHOP doctors do it. When you need advice, they give you custom consultation. They help, but recognize that the patient is yours. When I need their expertise, they’re there.”

For Dr. Phillips and for Dante.