Siblings Yusuf and Khadija were both diagnosed with methylmalonic acidemia (MMA), a rare and life-threatening genetic disease. Successful liver transplant for Khadija and combined liver-kidney transplant for Yusuf at Children’s Hospital of Philadelphia (CHOP) have improved their quality of life. 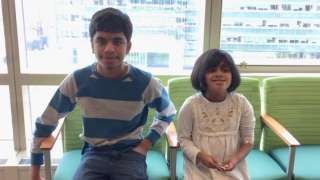 While on a flight back to their home in Delaware after visiting family in India, Irfan Patel and Farheen Mohamed noticed their 9-month-old son, Yusuf, was breathing too quickly. By the time a flight attendant made an announcement asking if there was a doctor on board, Yusuf had had a seizure.

The plane made an emergency landing in Istanbul, Turkey, where a medical crew was waiting to take Yusuf by ambulance to a nearby hospital. In the critical care unit, Yusuf remained in a coma as his care team tried to figure out why his blood sugar was dangerously low and his blood was very acidic. The doctors weren’t sure what was causing his symptoms — or whether Yusuf would recover.

Gradually, Yusuf did begin to get better, and after six days of tests, treatments and waiting for answers, there was a diagnosis.

What is methylmalonic acidemia (MMA)?

Yusuf was diagnosed with methylmalonic acidemia (MMA). People with this rare, genetic disorder are unable to produce an enzyme that’s needed to break down and use certain proteins and fats found in food. This causes a buildup of acids and other harmful substances in the blood, urine and other cells, including brain cells. How this toxic buildup affects the body can vary drastically from one person to another. For some, it causes seizures, strokes, growth problems, developmental delays and frequent episodes of metabolic crisis (like the one Yusuf experienced on the flight home from India).

After spending nearly two weeks in Istanbul, Yusuf returned home to Delaware. His parents brought him directly to a local hospital, where Yusuf remained for three weeks while doctors surgically placed a feeding tube and carefully monitored his protein intake.

Once home, the Patels were able to closely regulate Yusuf’s food intake through his feeding tube. Any time Yusuf showed signs of a metabolic episode (such as vomiting or extreme fatigue), his parents would rush him to the hospital for treatment before it became a full-blown metabolic crisis.

Despite careful monitoring of Yusuf’s diet, Yusuf and his family were still heading to the hospital almost every other month — even more often during the winter, when infections and viruses are more prevalent.

Finding their way to CHOP

When the Patels’ geneticist left their local hospital, the family decided it was time to transfer their son’s care to a hospital that specializes in treating rare genetic disorders. The family chose Children’s Hospital of Philadelphia (CHOP) because it offers pediatric care and a multidisciplinary team that works together to care for kids like Yusuf.

“The team at CHOP was great. Yusuf needed to see people in metabolism, GI, nephrology, psychiatry and other departments, and everyone was right there,” says Irfan.

While Yusuf was being treated at CHOP, the Patels had a second child, Khadija, who is seven years younger than Yusuf. Khadija was diagnosed before birth with MMA and received medical attention as soon as she was born. She was immediately put on a feeding tube, a nasogastric (NG) tube, then a G tube. Khadija’s condition was even more serious that Yusuf’s had been, and she needed more intensive care. She, too, required frequent hospitalization.

At CHOP, Yusuf and Khadija’s new geneticist suggested they enroll in a clinical trial. It was during the study that the Patels learned liver transplantation could help their two children lead a more normal life.

“You’re replacing the organ that’s causing the health problems with one that has the correct set of genes for producing the necessary enzymes,” says pediatric gastroenterologist Elizabeth B. Rand, MD, the Medical Director of CHOP’s Liver Transplant Program.

For Yusuf and Khadija, a liver transplantation would give them the chance to stop the ongoing cycle of hospitalizations.

In addition to a liver transplant, Yusuf’s care team was considering an eventual kidney transplant. MMA had been taking a toll on his kidneys, which were forced to work overtime attempting to remove the toxic acid buildup in his body. When he was 9, he went into stage 4 renal failure.

“Without a kidney transplant, it was clear he would eventually be on dialysis,” says Jo Ann Palmer, CRNP, a nurse practitioner in the Kidney Transplant and Dialysis Program.

In May of 2013, Yusuf was put on the transplant list. He waited only five weeks before suitable organs became available, and Yusuf received a new liver and kidneys. His transplant surgery was a success.

While he does deal with some developmental delays and has special therapeutic support at school, Yusuf, at 15, has become a well-rounded, active teenager. His feeding tube was removed, and he’s now able to eat normal food with some restrictions and supplements. He’s grown taller, too, from having a healthier metabolism. While he was once below the 5th percentile on the growth chart for his age, he’s now closer to the 25th percentile.

Khadija’s opportunity for a new liver came when she was 6. A suitable donor organ was available, and Khadija had her procedure at CHOP. Once she had recovered from the surgery, her health showed a marked improvement.

Now 8, she still requires a feeding tube for most of her nutrition. She is short for her age and has developmental issues, but she no longer has frequent medical crises that used to lead her to regular hospitalizations.

Both Khadija and Yusuf return to CHOP for periodic follow-ups with their care teams for monitoring.

“The transplants have given Yusuf and Khadija the quality of life they deserve — that all kids deserve. We are so lucky to have had this excellent care. ”

Yusuf has become an active advocate for organ donation. When he was 12, he formed “Team Hope” to participate in Delaware’s first-ever Donor Dash. The event raises funds for the Gift of Life Donor Program, which coordinates organ and tissue donation in Pennsylvania, New Jersey and Delaware. His team raised the second highest amount of money collected by a team. Yusuf has led Team Hope in the Delaware Donor Dash every year since, and has been part of Team CHOP in the Philadelphia Donor Dash for the last five years.

Yusuf has spoken about his journey at local schools and churches, hoping his story will encourage others to register to become organ donors. And he organizes a book drive every year to collect children’s books for CHOP’s library.

“I think speaking out and sharing his story has given Yusuf a lot of confidence, because he knows he’s making a difference for other people like him” says Irfan. “We’ve always told him he’s differently abled, not disabled, and I think he’s really taken that message to heart.”