At 12 years old, Ryan loves sports, but can only play when he has the energy. He has two serious medical conditions, one that makes him allergic to most foods and another that drains his energy. But with the help of multiple CHOP specialists, he is able to attend school and remain active. 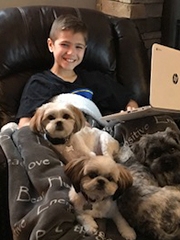 Ryan was a normal, healthy baby, with one exception: He threw up — a lot. His pediatrician told his parents, Marlene and Kevin, not to worry. Ryan’s reflux was not unusual and it was likely he’d grow out of it — but he didn’t. At 1 ½ years old, he was still throwing up.

Just before he turned 2, Ryan had a scary reaction to a snack that contained peanuts. He grabbed his throat; his voice became raspy, and he broke out in hives. A local allergist confirmed he had anaphylactic allergies to peanuts and eggs.

Even with those foods taken out of his diet, Ryan continued to vomit frequently. Frustrated that his doctors weren’t getting to the bottom of the problem, Marlene called Children’s Hospital of Philadelphia (CHOP). She made an appointment with Chris Liacouras, MD, a pediatric gastroenterologist and Co-Director of CHOP's Center for Pediatric Eosinophilic Disorders.

Dr. Liacouras examined Ryan and ordered additional tests. He found the allergic reactions were not limited to peanuts and eggs. Ryan also reacted strongly to beef and chicken. Dr. Liacouras discovered the reactions were primarily in Ryan’s esophagus, the tube that carries food from the throat to the stomach. That led to a diagnosis; Ryan had eosinophilic esophagitis (EoE), a chronic allergic inflammatory disease of the esophagus.

Working with Dr. Liacouras and nutritionist Michele Shuker, MS, RD, CSP, LDN, the family began eliminating foods and other possible irritants to pinpoint Ryan’s allergies. They pulled up all the rugs in their home and did a thorough cleaning. They even had to find a new home for their dog. Ryan was also put on nasogastric (NG) tube feeds to ensure he got adequate nutrition as his diet was modified.

Ryan’s case was pretty extreme. He wasn’t just allergic to some foods — he was allergic to most of them. Through a rigorous testing process, he worked his way down to just two safe foods: bananas and green beans. Additional foods were then slowly added back in. By the time he got to kindergarten, he was up to just eight safe foods. To make sure he was getting enough nutrition, Ryan’s NG tube was replaced by a more stable feeding tube, called a gastrostomy or G-tube.

By the time Ryan was 3, his speech wasn’t developing normally. Marlene brought him to a speech pathologist for testing and was told Ryan had more than just a speech problem. He jumbled words when he was tired and was having trouble with names and labels. The therapist suggested she take Ryan to a neurologist.

The neurologist did an additional series of tests. Since his problems seemed to worsen when Ryan was tired, the doctor included research-based screening for mitochondrial enzyme problems in his cheek cells. While not a highly reliable way to diagnose mitochondrial disease, the research results led his doctor to suggest he should pursue more specialized evaluation for a possible mitochondrial disorder.

Mitochondrial disease is a very variable condition in which mitochondria — the cellular batteries that produce energy — don’t function as they should. Depending on which organs cells have low-functioning mitochondria, mitochondrial disease can cause a wide range of health problems, including fatigue, weakness, exercise intolerance, developmental disabilities, seizures, strokes, vision or hearing loss, growth and feeding difficulties, immune deficiency, hormone problems, acute decompensation, and serious problems with heart, liver or kidney function.

The family brought Ryan back to CHOP for examination by Marni Falk, MD, an attending physician and Executive Director of the Mitochondrial Medicine, a frontier program at CHOP. Dr. Falk ordered clinical genetic diagnostic tests and recommended a muscle biopsy.

Initial tests indicated Ryan did have a mitochondrial disease, but they didn’t provide enough information for a specific diagnosis. Dr. Falk explained it would take time to confirm the specific form of his disease. For that, they would need to identify the genetic mutation causing the problem. There are many causes of mitochondrial disease, which can result from mutations in more than 300 different genes located either in the cell’s nucleus or within the mitochondria itself. Researchers are still working to fully identify all possible genetic causes and develop improved tests for diagnosis.

Dr. Falk prescribed a special combination of nutrients, vitamins, and co-factors (often called a “mitochondrial cocktail”) to supplement the formula Ryan was getting through his G-tube. She knew figuring out the genetic cause of Ryan’s disease might help further tailor his treatment, but in the meantime, the supplements might help boost his energy and slow the progression of the disease.

There is currently no cure for mitochondrial disease, nor is there a highly effective treatment, even when the underlying genetic cause is known. But the disease is managed similarly as in Ryan, with supportive therapy, which may include nutritional management, exercise and vitamin or amino acid supplements.

The diagnosis has provided important information for Ryan’s overall care. Mitochondrial complex V deficiency is associated with heart and vision problems. So, Ryan has regular appointments with a CHOP eye doctor and a cardiologist in addition to his follow-ups with Mitochondrial Medicine, which are now with Amy Goldstein, MD, and with Dr. Liacouras for his EoE. Rebecca Ganetzky, MD, in Mitochondrial Medicine continues to study Ryan’s cells in the research laboratory to better understand how his specific MT-ATP6 mutation might be more effectively treated.

The genetic information also helped in another way. Marlene had been experiencing occasional numbness in her hands and feet. Ryan’s diagnosis led to her own diagnosis of a milder case of the same condition. Dr. Goldstein has taken her on as patient, too. 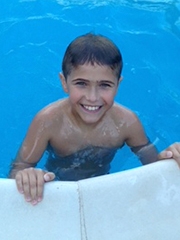 Now 12, Ryan is often tired as a result of his mitochondrial disease. He still loves sports and plays baseball and basketball when he has the energy. Although he has difficulty retaining information about play strategy, he still plays whenever he can, as the exercise is good for him. While he is unable to attend school for a full day, he is still able to attend classes and learn.

The family is thankful for the expert treatment Ryan has received at CHOP. “They saved my son,” says Marlene. “If it wasn’t for them we wouldn’t be where we are today. I just think all of the nurses and doctors at CHOP are wonderful.”