Ignacio, at 11, is an outgoing kid who enjoys climbing and throwing a baseball or football. His enthusiasm for life is a delight to his parents, who came close to losing him as a baby. He was saved by the expert intervention of CHOP’s mitochondrial disease experts and a timely liver transplant.

Ignacio’s mitochondrial disease story is a good example of how varied and unpredictable the condition can be. His mother, Marciana, says she still cries when she thinks back to his first three months. But she loves to tell Ignacio’s story because it has such a happy ending. She wants other families to know that there is hope, even when the prospects for their very sick child can seem bleak.

Ignacio was a healthy eight-pound baby at birth, and for his first 24 hours he showed no signs of any problems. On his second day of life, his first at home, Marciana noticed troubling signs. “He was lethargic,” she remembers. “He just lay there sleeping, making grunting and moaning sounds. When I lifted his eyelids, his eyes were extremely jaundiced, a greenish-yellow color.” A worried call to their pediatrician sent them to the local emergency room in Delaware, where tests showed that Ignacio was very sick. His lactic acid and ammonia levels were dangerously high.

The team attending to Ignacio was quickly on the phone with doctors at Children’s Hospital of Philadelphia (CHOP). The combination of symptoms suggested liver failure due to a metabolic condition, possibly mitochondrial disease, a condition in which the energy-producing elements in the body’s cells malfunction and lactic acid can accumulate to high levels.

This was 2009, and very few hospitals had expertise in diagnosing and treating the complex range of mitochondrial conditions. CHOP was one of them, and two of its leading metabolic disease experts guided the medical team in Delaware by telephone.

“That night he coded,” says Marciana. “He stopped breathing.” Ignacio was intubated to keep him alive and quickly transported to CHOP by ambulance.

In CHOP’s Newborn/Infant Intensive Care Unit (N/IICU), three-day-old Ignacio began the first of several remarkable recoveries that both pleased and puzzled his medical team. He needed emergency support at first to restore his breathing, get his oxygen saturation to a safe level and bring down the high concentrations of ammonia and lactic acid. He responded well and was soon breathing without support.

At this point, mitochondrial disease was suspected as one of several possible causes of his problems. Mitochondrial disease can take many forms, affect many body systems and follow widely different rates of progression. Ignacio’s case didn’t fit into any known pattern. Even with extremely high levels of lactic acid, which should have made him lethargic or even immobile, he bounced back to become an active, squirming, crying baby. Instead of getting worse as his disease progressed, he seemed to get better. After two weeks, he was released to go home, with a plan for regular follow-up visits and lab tests to monitor his condition.

Ignacio was able to spend a month at home. Initial tests during that time showed no significant issues. However, he wasn’t growing. He had weighed eight pounds at birth, and still weighed just eight pounds at six weeks old.

Then, at month’s end, the tests showed a concerning decrease in his liver function, and Ignacio returned to CHOP. Over the next three months, he would be at home for just one week — the week of Christmas, when his condition briefly improved. Just days after the holiday, Marciana noticed signs that Ignacio was retaining fluid, a worrisome indication of liver failure. He was quickly back at CHOP, and his condition was deemed so critical that he was listed for a liver transplant.

Ignacio came close to dying more than once in the following two weeks. His body would shut down and he’d be revived with heroic efforts, which included intubation and a breathing machine. As more and more fluid built up in his body, it put pressure on his heart and lungs.

A liver transplant at 2-1/2 months old

Within just a few weeks, the baby’s condition was desperate -- Ignacio was failing fast. But there was new hope. One evening, the liver transplant surgeon brought the news that a donor liver was available. Ignacio received his new liver in an operation that went straight through the night. Marciana and her husband, also named Ignacio, were surrounded by family as they awaited the outcome.

“He came out at six the next morning,” Marciana remembers. Even though Ignacio was still recovering from major surgery, “his skin had changed immediately from greenish-gray to a beautiful rosy pink. He looked like a healthy boy. It was the best feeling in the world.”

Ignacio slowly started to get better after the transplant and within a month was able to go home for good. His frightening ordeal was over.

“The hardest part was when they didn’t know what it was,” remembers Marciana. The early blood and tissue tests didn’t return a match with a known condition. Then, after the transplant, tests of liver, muscle and heart tissue narrowed the diagnosis to involve mitochondrial complex IV deficiency, also known as cytochrome C oxidase (COX) deficiency. But this was only a general biochemical diagnosis, not a specific genetic answer. Ignacio and his parents would have to wait for more precise answers as advances continue to be made in genetic diagnostic testing.

“The doctor was wonderful at explaining things. She would sit with me and draw me pictures of a gene, showing me what she thought was going on. The nurses were wonderful, too. The support they gave me and the patience the they showed — the doctor and the nurses — was remarkable.”

An ongoing commitment to coordinated care

Both the mitochondrial and liver transplant teams at CHOP continued to work closely with Ignacio’s pediatrician in Delaware. “It was such a beautiful effort by the physicians,” says Marciana. “It’s hard living in one state and not having all of the resources close by. They really made it work for Ignacio.”

Ignacio returns to CHOP every three months for close follow-up after his liver transplant, where his care team is led by Elizabeth B. Rand, MD, the Medical Director of CHOP's Liver Transplant Program. He also returns to check in with his mitochondrial medicine team, led by Marni Falk, MD, Executive Director of CHOP’s Mitochondrial Medicine Frontier Program. Nutritional support is an important part of therapy for mitochondrial disease and the medical team and family are considering specific dietary supplements to boost Ignacio’s energy and stamina. Consultations with other specialists are also planned, as mitochondrial disease can progressively affect hearing, vision, heart function and growth.

The mitochondrial medicine team is also continuing to search for the specific genetic cause of Ignacio’s condition. When he was a baby, nine genes were sequenced in an effort to find a diagnosis. That small number reflects both the difficulty and cost of genetic testing at the time, and the more limited knowledge, ten years ago, of the genetic causes of mitochondrial disease. Scientists now know that mitochondrial disease can be caused by mutations in more than 300 nuclear DNA or mitochondrial DNA genes. At Ignacio’s most recent visit, tissue samples were taken and sent for whole exome sequencing to simultaneously evaluate for variants in thousands of known human disease genes, which may reveal an answer later this year. Every day, the CHOP team is working to develop new, more specific diagnostic tests that, in turn, may lead to better therapies. 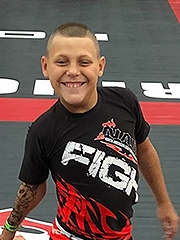 After recovering from his liver transplant, Ignacio surprised everyone with his remarkable progress. He started growing and reaching key developmental milestones, and he has kept on achieving them.

Marciana describes Ignacio, now at 11, as an outgoing kid with a big heart. “Very caring, like his father.” He loves music, especially rap and country. He needs extra support in school but has an amazing memory for song lyrics. He has great hand-eye coordination and enjoys throwing and catching a ball. His dad has him run long for football passes. He swims and does flips off the diving board. “When you see him in his bathing suit, you see his scar. He calls it his tattoo. Otherwise nobody would know that he has a mitochondrial disease. He’s a total rock star.” 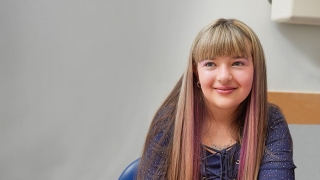