You’d never know it today, but 8-year-old Alexis was born with an absent right ear. His condition, microtia, refers to a missing or malformed ear and can involve one or both sides. He failed his newborn hearing screening and was also diagnosed with an atresia (absence of the opening) of the external ear canal.

In addition to being seen at Children’s Hospital of Philadelphia (CHOP) by Otolaryngology and Audiology to follow his hearing status, Alexis was referred to Plastic Surgery to discuss the options for treating his ear difference. When Alexis was 5 years old, the family met Scott P. Bartlett, MD, Chief of the Division of Plastic and Reconstructive Surgery. A staged ear reconstruction was recommended.

At the time, the method available was to use rib cartilage to carve a structure for reconstruction. The process required several operations, and Alexis would need to wait until he was at least 8 to have an adequate amount of rib cartilage. Often, best results with this method were found when children were older, and surgery would be postponed until they were 10 to 12 years old.

Thankfully, Alexis didn’t have any other medical complications that required early treatment. But as he grew up, it became increasingly difficult to cope with the appearance difference of having a missing ear.

“Sometimes the kids at school made fun of him because he didn’t have an ear,” says his mother, Petra. “It made him feel bad.”

One day, a friend of Petra asked where Alexis was being treated and suggested she return to CHOP to see if there was anything new to help Alexis. “My friend told me his son had been helped by doctors at CHOP,” says Petra. “He told me they have the best doctors.”

Alexis’ family came back to Children’s Hospital to see if there were any other treatment options.

When he was 7 1/2 years old, Alexis saw Dr. Bartlett again. “Dr. Bartlett explained there was now a new type of surgery, and we didn’t have to wait until he was older,” says Petra. “I was totally surprised.”

Rather than use cartilage from Alexis’s ribs, Dr. Bartlett said he could perform an ear reconstruction with a material called porous polyethylene, or MedPor®. Using this state-of-the-art technique, a ready-made synthetic ear is implanted under a large flap of tissue taken from beneath the scalp and upon which a skin graft is placed. By not needing rib cartilage, there would be no chest scar and the associated recovery from obtaining the rib cartilage graft.

After learning more about the procedure, the family decided to move forward. Alexis had the reconstructive surgery in July 2015.

“I was a little nervous, because it [surgery] lasted eight hours,” says Petra. But everything went smoothly, and she and Alexis are both thrilled with the results.

The innovative ear reconstruction was the third performed at CHOP, and is not available anywhere else in the region. This surgery has many benefits. It can be done at an earlier age compared to the rib cartilage method. The child won’t have a chest scar, and will have a much shorter recovery from surgery and less pain. MedPor is a single-stage surgery compared to the multiple surgeries required by the rib cartilage graft. Lastly, the results are superior for ear reconstruction in children where skin deficiency is present.

For Alexis, the next step is getting him to actually hear out of his reconstructed ear. He will have another surgery with an otolaryngology (ear, nose and throat) specialist to build an ear canal, which will access his existing eardrum.

In the meantime, Alexis is thriving. “He used to cover his head and didn’t want to show his ear,” says Petra. “Now he’s really happy.” 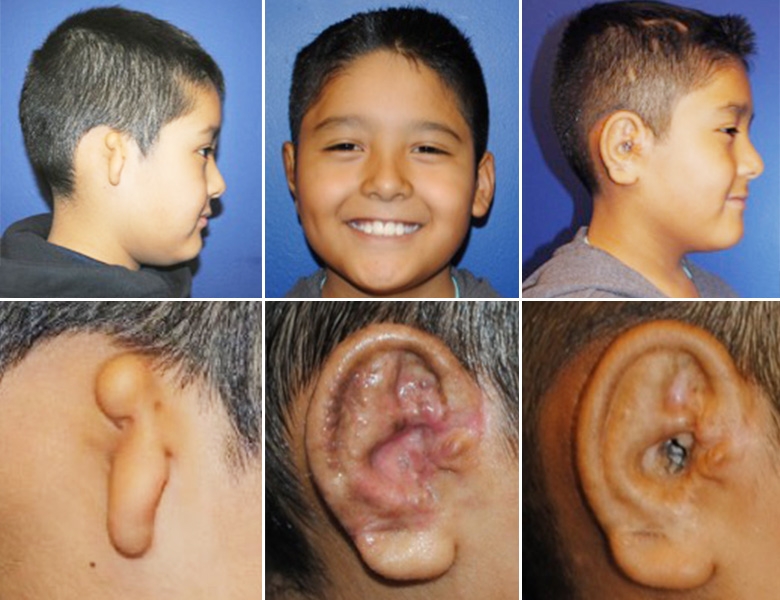