“The unknown.” That’s the hardest part of expecting a baby who may have cystic fibrosis (CF), according to Jessica. Her son, Shane, was diagnosed with the condition 15 weeks into her pregnancy. Today, he is a happy toddler who never stops moving, and the family has settled into new lifelong routines. 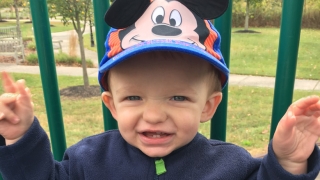 In people with CF, a defective gene causes a thick, sticky buildup of mucus in the lungs, pancreas, and other organs. In the lungs, the mucus clogs the airways and traps bacteria, leading to infections, extensive lung damage, and eventually, respiratory failure. In the pancreas, the mucus prevents the release of digestive enzymes that allow the body to break down food and absorb vital nutrients.

“We never even considered that we were carriers of the CF gene,” says Jessica. “That’s because I had undergone genetic testing with our first two children (now 10 and 8 years old) and was not considered a ‘carrier.’ But, I have a rare genetic mutation that doesn’t show up in routine screening.”

That’s why it was a surprise when genetic testing showed a 1 in 4 chance that Jessica and Greg’s third child, Shane, would have cystic fibrosis. An amniocentesis said it was certain.

Shock turned into guilt which turned into action. In preparation, the couple traveled from their home in New Jersey to the Cystic Fibrosis Center at Children’s Hospital of Philadelphia (CHOP), where they met with a care team led by Julian Allen, MD. They were impressed by the professionalism, expertise and family-like atmosphere, as well as the “full-service” approach to care.

“We all walked out of there and said, ‘This is the place,’” Jessica says. “We felt prepared to tackle the disease head-on with support from the Cystic Fibrosis Center at CHOP.”

Focusing on the future 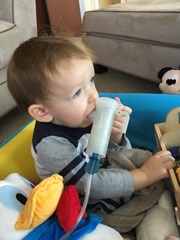 Because CF is an “invisible” illness, Shane appeared healthy at first. But a sweat test shortly after he was born confirmed the prenatal tests that he had cystic fibrosis. Jessica and Greg began to focus on the future.

After Shane’s first appointment with Dr. Allen and a full day of learning how to manage the disease, the couple started to feel more prepared to handle whatever came their way.

“Once he was born something changed for us,” Jessica says. “I think it was because we were confident in the care he was getting. Dr. Allen told us to focus on the things that are within our control. Don’t go looking for a cure, but focus on taking care of Shane, doing his chest physical therapy, giving him his enzymes, loving him, and treating him the same as we did our daughters when they were infants. It was phenomenal advice that we remind ourselves of on a regular basis.”

They were also reminded of the significant advancements taking place in the treatment of CF, which added to their confidence in Shane’s medical team. 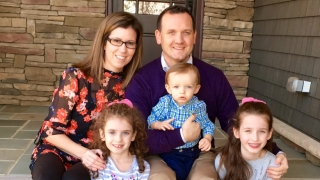 Jessica and Greg learned how to perform Shane’s CF chest physical therapy at home — two 45-minute sessions per day that focus on manually clearing the mucus in his lungs. As time went on, the couple found ways to adapt the sessions to make them more effective and easier. For example, they substitute their own cupped hands instead of percussor cups when doing his chest PT. They also put on his favorite shows (these days it’s the Wiggles, Topsy and Tim and Mickey Mouse Clubhouse) and, most days, he doesn’t put up a fight. 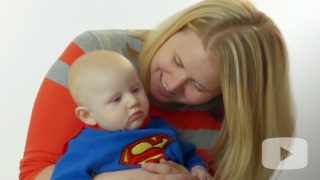 In this video, cystic fibrosis patient Johnny, with help from his mom, demonstrates how to take enzymes and how to do chest physical therapy to manage his CF.

They also learned early on that Shane’s pancreas does not produce enough enzymes to help his body digest fats, proteins and carbohydrates. Each night, Jessica breaks open each of the 15 to 18 capsules Shane will require for the next day’s feedings and distributes the tiny beads into pill cups. This saves time and allows Shane’s 10-year-old and 8-year-old sisters to help with the preparations adding the enzyme beads to his food.

“It’s just part of our routine now, and now that we’re in a routine, we’re trying to live life to the fullest,” Jessica says. “We don’t think of it 24/7 like maybe we did early on. We’re not dwelling on it, we’re just living.”

As for Shane, he is a happy toddler. “He is walking and talking and getting himself into a lot of mischief,” Jessica says. “He’s a little teaser, he likes to make people laugh … and he always has a smile on his face. We are truly blessed to have him as our son.”