For Bear, a walk around the block can turn into an epic adventure where he and his father are being chased by dragons. For the active 3-year-old, bedtime stories, going to the zoo, and reading The Land Before Time fuel his creativity and imagination. 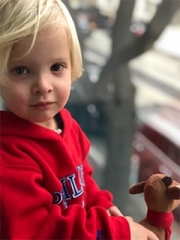 Bear has come a long way in a short time. When he was just a few months old, his parents, Rebecca and Scott, worried about his cognitive ability because of the odd shape of his head.

During a visit to Bear's pediatrician, Fanny Murken, MD, at Children’s Hospital of Philadelphia (CHOP), Rebecca asked about the elongated shape of his head. She was concerned his brain may not be developing normally. Dr. Murken referred the family to Shih-Shan Lang Chen, MD, an attending neurosurgeon in CHOP’s Division of Neurosurgery. Dr. Chen diagnosed Bear with sagittal craniosynostosis and — harnessing the power of CHOP’s multidisciplinary teams to get families needed answers as quickly as possible — asked Jesse A. Taylor, MD, Co-director of CHOP’s Craniofacial Program, to meet with Bear and his parents that same day.

Craniosynostosis is a condition in which the growth seams in an infant’s skull close too early, causing problems with normal brain and skull growth.

Craniosynostosis is a condition in which the sutures (growth seams) in an infant’s skull close too early, causing problems with normal brain and skull growth. The first visible symptom of craniosynostosis is an abnormally shaped skull, which can damage the rapidly growing brain of an infant.

Dr. Taylor explained the condition to Bear's parents and said the causes of the condition vary. In some cases, craniosynostosis is genetic and may be associated with other congenital differences. However, in many cases, such as Bear's, the early closure of the sutures is spontaneous and not linked to other birth defects. Craniosynostosis can affect one growth seam or multiple seams. In Bear's case, the early closure affected only one suture — making it easier for Dr. Chen and Dr. Taylor to manage his condition.

Strip craniectomy as a solution

After discussing treatment options with Bear's family, Dr. Taylor recommended a strip craniectomy and placement of cranial springs, a type of craniosynostosis surgery, to remove the single fused suture and reshape the skull.

Dr. Taylor's experience and expertise gave Bear's family confidence their son would have a successful outcome. “Dr. Taylor has done more than 100 corrective surgeries for this condition," Scott says. “He told us it was a relatively quick procedure.”

Dr. Taylor eased the parents’ concerns about the procedure and the long-term effects Bear's condition may have on his health and development.

“My wife had concerns about Bear's cognitive development and about the potential for a deformity of his skull," Scott says. "It was apparent from our own research that there were a lot of techniques that could be used to correct this. One of our main concerns was that the treatment not be very invasive.”

Since Bear was diagnosed within his first few months of life, he was a candidate to undergo two minimally invasive surgical procedures. The first was a joint procedure in which Dr. Chen removed the fused suture that was preventing normal growth and Dr. Taylor inserted springs that would slowly expand Bear’s skull to the correct size. After three months, Bear's skull had regained a normal shape, and Dr. Taylor performed a second procedure to remove the springs.

“Dr. Taylor told us there was a chance that Bear would need a blood transfusion during the procedure, and to prepare for swelling and bandaging after the first surgery," Scott says. "He walked us through what to expect and how long it would take. The first surgery included an overnight stay in the hospital. The second was only a few hours long.”

Two-and-a-half years after surgery, Bear is doing great. Scott credits the personal care and attention of Bear's medical team for the normal routine his 3-year-old has today.

“I am appreciative of how involved the primary care doctors were throughout and how easy they were to get in touch with,” Scott says. “They coordinated all our care and were very attentive to our needs. They got us to see the right people quickly and were responsive to my wife’s concerns.”

“ As a doctor myself, I was very impressed with CHOP.”

Bear isn't undergoing any current treatment now, but does have an annual checkup to ensure his head growth remains within normal range.

“There will be follow-up every year until he’s a teenager because there’s a risk the suture could re-fuse before then," Scott says. Otherwise, Bear has a normal day-to-day life for a toddler: He goes to day care, walks around the neighborhood with his dad, and has dinner with his family. “We have a routine,” says Scott. 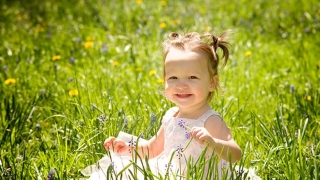 Creating Room for Her Brain to Grow

A year after craniofacial surgery, Brynnli is a happy, active toddler. 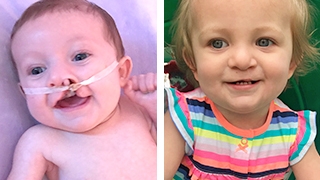