What seemed like a common cold turned out to be a rare condition that left 2-year-old Scarlett unable to move her right arm. Treatment from experts at CHOP has helped her regain function and hope for the future. 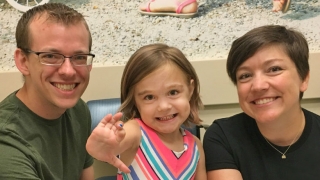 When Christian gets down about the struggles his family has been through over the past two years, the tattoo on his arm of Nemo, the orange and black clownfish from the popular animated movie Finding Nemo, reminds him of his daughter Scarlett’s resilience and he smiles.

It all began the week before Scarlett’s second birthday. Scarlett was congested and had a fever off and on. Her symptoms were pretty typical of a cold, so her parents — Christian and Andrea — didn’t think much of it. But the day after her birthday party, Scarlett woke up from a nap and suddenly couldn’t use her right arm.

“She was dragging her right arm,” recalls Andrea. The couple was concerned. It was Sunday and Scarlett’s pediatrician’s office was closed, so the family decided to go to Children’s Hospital of Philadelphia’s Urgent Care Center in King of Prussia, which isn’t too far from their home.

The CHOP team did an X-ray and ultrasound, but nothing appeared broken, so they thought it might be nursemaid’s elbow, a common injury in toddlers in which the radius bone slips out of its normal place at the elbow joint. In most cases, the joint can be put back in place with a gentle maneuver. A click is often heard when the joint goes back into place, and the child typically regains use of their limb within a few minutes. But when the physician tried to move the elbow joint back in place, there was no pop, and Scarlett’s arm was still limp.

The urgent care physician thought the problem might be neurological. She recommended the family go to the Emergency Department at CHOP’s Main Campus in Philadelphia, where they would have access to the full array of top-ranked specialists and specialized diagnostic technology.

Christian and Andrea could barely contain their panic as they headed to the CHOP ED. Once there, Scarlett underwent a battery of tests, but they all came back inconclusive. The family was scheduled for follow-up appointments with pediatric hand surgeon Apurva Shah, MD, and pediatric neurologist Sabrina Yum, MD, both Co-directors of CHOP’s Brachial Plexus Injury Program.

Based on an initial evaluation by Drs. Shah and Yum, Scarlett underwent an MRI, a spinal tap, and a nerve conduction study. The tests suggested that Scarlett had acute flaccid myelitis. This rare and serious condition occurs when a virus or associated inflammation attacks the motor neurons in the spinal cord. This causes the muscles and reflexes in the body to not work normally and can result in permanent paralysis. There has been a mysterious rise in the number of children affected by the condition recently.

Meet one family dealing with AFM and learn about the efforts of CHOP researchers who continue to look for clues and the best treatment options.

Without treatment, the condition can spread to other points along the spinal cord. Scarlett was admitted to the hospital and given intravenous immunoglobulin to reduce the swelling in her spinal cord and heal the existing nerve damage. By the end of her five-day hospital stay, Scarlett’s personality was coming back. But regaining her arm function has been a slower process.

“Her brain was trying to talk to her arm, but her arm couldn’t respond,” says Andrea of the frustrating condition. “She still had feeling in it. She just couldn’t make it move.”

Dr. Shah had been monitoring Scarlett regularly over those months and was concerned by the lack of recovery. He suggested Scarlett undergo a nerve transfer surgery. Healthy nerves from Scarlett’s ribs and neck were disconnected and transferred to dysfunctional nerves in her shoulder and elbow.

The nerve transfer surgery was a huge success. Scarlett has been in occupational — and aquatic — therapy for the past year. She has regained a lot of shoulder power and is now able to use her right elbow to hold things in place and for leverage. Reflecting on the surgery, Andrea says, "It's kind of like magic!"

“Scarlett has made an exceptional recovery,” says Dr. Shah. “She is lifting her arm above her head for the first time since her diagnosis.” Scarlett can grasp things with her right index finger, but has limited grip with the remaining fingers. Dr. Shah hopes to perform a tendon transfer surgery in the near future, which will allow her to grab things with more than one finger so she can do fine motor tasks. He is proud of Scarlett, who has worked tremendously hard during her recovery.

“She is lucky to have two exceptional parents,” says Shah. “Christian and Andrea have worked tirelessly to support her recovery.”

Andrea and Christian nicknamed Scarlett’s right arm “lucky” after Nemo’s lucky fin in “Finding Nemo,” which is also much smaller than his left fin. On the anniversary of the onset of her symptoms, the couple got Nemo tattoos on their arms so they’d have lucky arms just like Scarlett.

“We show off our Nemos proudly like badges of honor and are happy to tell anyone who asks the story behind them,” says Andrea.

Looking forward to the future

Through it all, Scarlett has been a trooper. She gets frustrated when she can’t do something, but has adapted well to using her left arm to do things. All through therapy, her parents have kept her motivated with trips to Disney World.

“It’s hard to explain to a 3-year-old that she has to keep going to therapy so often and struggle to do this stuff,” says Christian. “So we say, ‘If you keep working hard, we can go back to Disney.’”

Her parents have struggled to work through their grief and anger over the diagnosis and what it might mean for their daughter down the road. Planning trips to Disney has helped them look toward the future rather than dwell on the not-so-great moments of the past and present. They try to focus on the things Scarlett can do, rather than what she can’t do, like painting, tap dance, ballet, soccer and — also like Nemo — swimming.

Scarlett was involved in the CAPTURE (Collaborative Assessment of Pediatric Transverse Myelitis: Understand, Reveal, Educate) Study, a project funded by PCORI (the Patient-Centered Outcomes Research Institute) to look at the diagnosis, treatment and outcomes of pediatric transverse myelitis, with the hope of informing future clinical trials. While the official end date of the CAPTURE Study was July 31, 2018, CHOP will be continuing this important prospective data collection with several other participating centers.