Fourteen-year-old Calvin is a member of his school’s student council. He is a straight-A student who loves science and would like to become a pharmacist when he grows up.

But unlike other kids his age, Calvin's homework is not just English and algebra — his also includes ordering a soda or his meal when he goes out to eat.

As a person who stutters, Calvin has trouble pronouncing "C," so when he does order, he opts for a root beer instead of what he really wants — a Diet Coke. 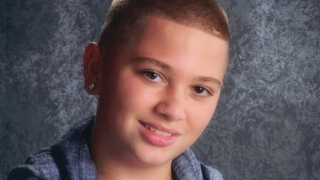 His speech language pathologist Joseph Donaher, PhD, CCC/SLP, who leads the Stuttering Program at The Children's Hospital of Philadelphia (CHOP), gives him these types of challenges as part of his therapy.

Calvin was about 4 years old when he started to show signs of stuttering. His parents, Tina and Wally of Bordentown, NJ, noticed the early signs immediately. It was an all-too-familiar experience — Wally stutters, as does Tina’s brother.

After eight years and many visits to several local speech therapists, all of whom thought Calvin would outgrow his stuttering, Tina and Wally knew their son needed specialized care. They found it at the Stuttering Program at CHOP.

Led by Dr. Donaher, one of only 175 board-recognized stuttering specialists worldwide, the Stuttering Program provides diagnostic services, interventional therapy and consultation for schools and community-based programs.

After a comprehensive evaluation of Calvin’s stuttering, Dr. Donaher started him on weekly, individualized speech therapy sessions. Calvin continues to see Dr. Donaher once every two weeks. The sessions focus on addressing much more than his stuttering behaviors.

Therapy includes changing Calvin’s negative perception of stuttering and tackling the fears that cause him to avoid things like answering in class or introducing himself to others. Dr. Donaher also works closely with Calvin’s school speech therapist to coordinate the goals of therapy.

The most important thing Tina has learned through Dr. Donaher and the Stuttering Program at CHOP is to let Calvin finish his sentences and not finish them for him.

"Everyday life is so busy; we do what we are doing fast," says Tina. "We needed to learn to slow down and just let Calvin finish what he wants to say." 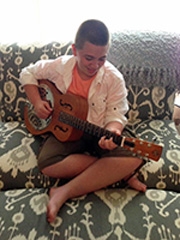 For Calvin, the one thing that makes him feel like any other kid is singing. When Tina learned that kids who stutter can often sing without stuttering, she signed Calvin up for voice and music lessons. That’s how Calvin discovered his passion for singing and playing the guitar.

Like Lazaro, the American Idol contestant who also stutters, Calvin’s voice is free of stuttering when he sings.

The first time I heard him sing, I cried," says Tina. "It was the first time I really heard his voice. It was amazing! His vocal teacher said he has the voice of an angel."

Although singing will not directly help with controlling Calvin’s stuttering, it has had a profound effect on him.

"Singing has helped him feel happy that he can finally express himself without fear. He definitely has become more confident since starting voice and guitar lessons. Music is like his getaway," says Tina.

In addition to his love for singing and music, Calvin likes to play basketball, Xbox and hang out with friends.

Getting involved to help Calvin in every way possible

Calvin's family is involved in support groups for kids who stutter. They attend conferences and workshops, such as CHOP’s Intensive Stuttering Program — the first program of its kind in Philadelphia, led by CHOP speech-language pathologists.

During the workshop, participants research the science of speech on the Internet, reflect on stuttering in writing or artwork, and practice everyday interactions that can be difficult or daunting, such as ordering at a restaurant. It gives Calvin a chance to meet other teens who stutter, learn new strategies and just have fun.

Tina and Wally feel lucky that Calvin is getting such high-quality care focused completely on his stuttering during his speech therapy sessions with Dr. Donaher. "Things have changed so much through the years for people who stutter, from therapy to public awareness," says Tina.

"CHOP has been our best experience with speech therapy,” says Tina. “Calvin looks forward to it."