Ana and Harry were devastated to learn their baby boy had a rare cancerous tumor in his liver. Thanks to a partnership between CHOP and physicians in their home country of Panama, they found hope and a team of experts to care for their son. 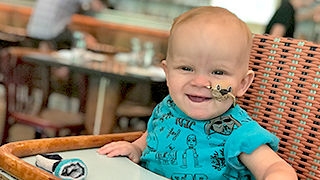 The first name Harry has been in the Strunz family for six generations. The family business — selling electrical equipment — was started three generations ago by one of those Harrys. When the time came for Harry the fourth and his wife, Ana, to name their first-born son, they naturally carried on the family tradition.

Harry the fifth was a healthy baby. But at 5 months old, his parents noticed his belly was hard. They mentioned it to their pediatrician in their home country of Panama, who brushed it off at first. Then, at 8 months, the pediatrician recommended switching to a different formula. But the problem persisted. Ana finally decided to get a second opinion with the pediatrician who cares for her goddaughter.

Fortunately, that pediatrician recognized that Harry’s symptoms weren’t feeding intolerance or constipation. He ordered an ultrasound and CT scan, which revealed a large mass in Harry’s liver, and referred the couple to an oncologist. A blood test for the tumor marker alpha-fetoprotein (AFP) was elevated and highly suggestive of hepatoblastoma, a rare childhood liver tumor. The tumor involved three quarters of Harry’s liver. It filled most of his abdomen and was causing compression of blood vessels as well as his right kidney.

Harry would need chemotherapy immediately and would need to see three or four different specialists, all of whom were located in different areas of Panama. The news left the couple devastated. After talking with the oncologist, they decided the best thing for Harry would be to undergo care at a children’s hospital in the U.S. that specializes in treating hepatoblastoma and began looking into the logistics.

As luck would have it, Ana’s sister-in-law’s pediatrician had just attended a breakfast with Ruth Frey, MSN, CPNP, and Victor Negron-Velez, MPA-HCA, leaders of the Department of Global Medicine at Children’s Hospital of Philadelphia (CHOP). The Global Medicine team regularly travels to Panama and other locations across the world to create partnerships that make it easier for families to access CHOP’s resources and expertise and provide ongoing training for local healthcare providers.

Philadelphia was familiar territory for the family. Harry had traveled to the city many times to visit his best friend who had attended the University of Pennsylvania, which is located just a few blocks from CHOP.

The CHOP Global Medicine team was preparing to return to Philadelphia the next day; Ana and Harry jumped at the chance to meet with them while they were still in Panama. They gathered all of little Harry’s medical records and rushed to meet with Ruth and Victor.

“After talking to them we felt a sense of relief for the first time,” says Ana. “We will never forget what Ruth said to us with a big hug: ‘This is a divine intervention, pack your bags; I can assure you are going to be in Philly by this weekend.’”

And they were. Within a week of the diagnosis, the family was meeting with specialists at CHOP.

“It was one of those things where all the stars aligned,” says Ruth, who coordinated all the logistics. “We just happened to be in the right place at the right time establishing relationships.”

Chemotherapy and resection for hepatoblastoma

The oncology team, Elizabeth Fox, MD, head of Developmental Therapeutics at CHOP’s Cancer Center, and Chelsea Kotch, MD, confirmed Harry’s diagnosis. A small biopsy of Harry’s tumor was performed by experts on the CHOP Interventional Radiology procedure team; a CAT scan of his lungs and a liver-specific MRI scan were also performed. Fortunately, Harry’s hepatoblastoma had not spread to his lungs. However, the AFP in Harry’s blood was markedly elevated. In a 9-month-old child like Harry, the normal AFP level should be less than 30 ng/mL; Harry’s level was over 900,000 ng/mL.

The plan was to attack the tumor with a few cycles of chemotherapy to shrink it as much as possible and then surgically remove the tumor. Because of the tumor’s position — it was very close to major blood vessels in the liver — there was a chance that it wouldn’t be able to be resected, and Harry would need a liver transplant. Jessica Wen, MD, and experts from CHOP’s Liver Transplant team, including transplant surgeons Abraham Shaked, MD, PhD, and Kim Olthoff, MD, evaluated Harry. His AFP was decreasing and his cancer had decreased in size after two courses of chemotherapy, but the tumor was still not able to be resected. The team recommended two more cycles of chemotherapy.

The treatment caused Harry to lose his appetite, so specialists in nutrition for children with cancer recommended a feeding tube to make sure he was receiving the nutrients he needed to fight cancer. In addition, the chemotherapy caused a decrease in Harry’s ability to hear, which is the most common side effect of that treatment for hepatoblastoma. CHOP hearing specialists prescribed hearing aids so Harry’s hearing would be adequate to promote normal age-appropriate speech, in both Spanish and English.

After four courses of chemotherapy, the surgeons agreed they could perform a complex liver resection rather than a liver transplant. A month after Harry turned 1 year old, the Liver Transplant team was able to remove the tumor. In doing so, they also removed three quarters of Harry’s liver. 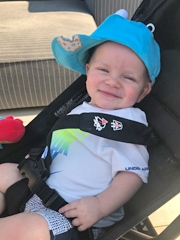 Little Harry’s resilience after surgery was nothing short of amazing.

“It was traumatic to see him hooked up to all of the tubes,” says his father. “But every day they took another tube away. The care was amazing. He had four or five nurses and doctors constantly caring for him.”

After five days in the hospital, Harry was discharged. That day, he was already crawling around and playing in their hotel room like it was nothing. The liver is an incredible organ that regenerates itself, so despite having lost a large part of his liver to cancer, Harry’s liver functions normally.

The family stayed in Philadelphia for two more cycles of chemotherapy to make sure every single cancer cell was gone from Harry’s body. After the last cycle, his AFP was nearly normal and his CT scan and MRI looked good, so he was given the all clear.

“He has some battle scars, but they’ll go away eventually,” says his father, referring to the scar from the port and surgery. “It’s a small price to pay, considering.”

“It will always be in the back of our heads,” he adds of his son’s cancer. “But studies show that 90 percent of the kids that get cured of the type of tumor he had are fine. So the odds are in our favor.”

Throughout their time in Philadelphia for Harry’s care, the family was showered with support from their network back home in Panama as well as the CHOP team. Their friends and family organized a prayer circle, and some family members even traveled to Philadelphia to lend moral support. When, in the midst of Harry’s treatment, his parents learned they were pregnant again, the Global Medicine team connected them with an obstetrician in Philadelphia. And when their visas expired, the CHOP team filed an extension for them.

“A lot of people helped us through this whole process,” says Harry. “Emotionally and medically.”

The family will return to CHOP every six months for follow-up until Harry is 5 years old to make sure the cancer doesn’t return. Harry will also need follow-up hearing tests throughout his life due to hearing loss.

Bringing CHOP expertise to others in Panama

Harry is a different kid since his treatment. He went from being a very serious baby to being a happy baby who laughs all the time.

“I remember Ana telling me before the diagnosis, ‘I don’t think our baby is happy,’” recalls Harry. “He had to have been uncomfortable. He had a softball in his belly.”

The couple is excited to be back in Panama, to have their little boy healthy and happy, and to welcome the new addition to their family. Before returning home, they met with members of the Global Medicine team to discuss ways they can support CHOP’s efforts to expand collaboration with physicians in Panama.

“The people at CHOP are really important to us,” says Harry. “They do amazing work. They literally saved my kid’s life. We are eternally grateful. I’m sure Harry isn’t the first kid in Panama to get hepatoblastoma. If the doctors in Panama worked with CHOP doctors, they could help more kids.”

Ruth agrees that it would have been a different road for Harry had he been cared for in Panama. Reducing such disparities in care is a key mission of CHOP’s Global Medicine team.

“We can’t always guarantee an outcome, but the one thing that we can assure the family is the quality of care. Pediatric experts in every subspecialty treating children during their entire stay in Philadelphia,” says Ruth. “It was an amazing experience to be able to offer them that.”