Raymond was diagnosed with spinal muscular atrophy (SMA) type 1 when he was 4 months old. His parents, Marcy and Matt, had noticed that he lagged behind in hitting milestones and was “floppier” compared to their eldest child. Raymond was unable to hold his head up and struggled to lift himself off the floor during tummy time. But they were crushed by the diagnosis and its severity.

SMA is a genetic disease that affects the spinal cord and nerves, resulting in muscle wasting and weakness. Type 1 is the most severe form of SMA. Children with type 1 usually have very limited ability to move and have a hard time feeding and swallowing, holding their head up, and breathing, and are unable to sit up independently. The muscles of the chest are also affected. Untreated patients typically require full-time ventilator support by the age of 2, and life expectancy is often shortened.

Because Raymond lacked the muscles necessary to expand and contract his lungs, he was unable to cough and clear his lungs of mucus and other secretions. Over time, this can result in pneumonia, lung collapse and an inability to breathe. Breathing problems are the leading cause of illness in children with SMA, and the most common cause of death among children with SMA type 1.

Children's Hospital of Philadelphia (CHOP) pulmonologist O. Henry “Hank” Mayer, MD, prescribed Raymond a cough assist machine, a noninvasive device that expands the chest and promotes the removal of secretions from the lungs. The machine helped, but about twice a year, a cold would turn into a life-threatening respiratory infection and Ray would have to be hospitalized for weeks.

By the time Ray was 6, there was another issue: the muscles around his spine had grown so weak that they could no longer support his spine, and he was developing scoliosis. The curve in his spine was compressing his right lung, causing thoracic insufficiency syndrome (TIS), a condition that prevented him from breathing normally and his lung from growing.

CHOP’s Center for Thoracic Insufficiency is the first national, multidisciplinary program devoted solely to the treatment of TIS. Center Director, Patrick J. Cahill, MD, evaluated Raymond and met with the family to discuss treatment options. The vertical expandable prosthetic titanium rib (VEPTR) is the only FDA-approved device to treat children with TIS. The VEPTR is a curved metal rod that is surgically attached to a child’s ribs, spine or pelvis using hooks on both ends of the device. It helps straighten the child’s spine and separate ribs so the lungs can grow and expand as the child grows.

Ray would need two VEPTR devices — one on each side of his rib cage — to create space in his chest for his lungs to develop more fully, as well as MAGnetic Expansion Control (MAGEC®) growing rods on the left and right side of his spine. Moving forward with the surgery was a hard decision for Marcy and Matt, but it seemed like Ray’s best hope.

A ray of sunshine 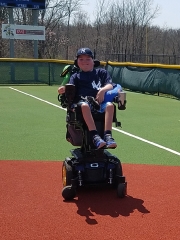 “The surgery was a phenomenal success,” says Marcy. “We are very lucky we listened to Dr. Mayer’s recommendation to have this surgery.” Ray is now finished with his rod lengthenings, and only returns to see Dr. Cahill once a year at CHOP's Specialty Care Center in Abington.

Ray gets nursing services five days a week. He takes Spinraza® — the first drug approved to treat children with SMA — and also uses a bi-level positive pressure (BiPAP) machine at night to ensure he breathes enough while he’s in deep sleep.

He goes to school in a regular classroom. He speaks clearly and eats almost all his calories by mouth, which is uncommon for a 14-year-old with his condition. He is also able to laugh and smile. When he does, his parents can’t help but smile along with him.

“We are very lucky,” says Marcy. “Many people say he is a ray of sunshine. He smiles and lights up the room with his incredible inner strength. He has taught us and others to appreciate the small things and to be thankful for what they have.” 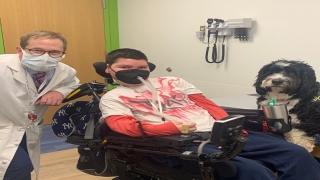 Ray and his service dog, Bacchus, at his yearly visit with Dr. Cahill. Ray uses a power wheelchair that he controls with the minimal use he has in his fingers. He loves going to Broadway shows with his family, and plays in the Miracle League, a baseball league for children with serious physical and mental disabilities. He's best buds with his service dog: a 70-pound bernedoodle named Bacchus. Bacchus helps Ray open doors, cross his legs and feel more independent.

“The fact that we were able to celebrate Ray’s Bar Mitzvah, which denotes becoming an adult in the Jewish faith, is a miracle,” says Marcy. “Much of that is because of our experiences with Dr. Mayer, Dr. Cahill and the CHOP nurses. The medical attention he has received from them is a large reason why he’s alive.”