What is ear reconstruction? 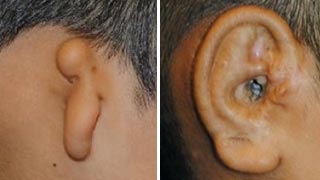 Ear before and after ear reconstruction

While reconstructed ears may not be as detailed and delicate as normal ears, the goal is to create an ear shape that is realistic enough that it does not attract attention to itself.

There are currently several methods used for ear reconstruction. These include using the patient’s own rib cartilage (autologous), using an implant (MedPor©), or using a prosthetic implant.

Autologous ear reconstruction requires multiple surgical stages.  During the initial stage, cartilage is taken from the ribs and used to create a three-dimensional sculpture that looks like a normal ear. This is the technique used by most surgeons, and is typically performed when the patient is between 6 and 10 years of age. At this age, the opposite ear is close to adult size and the ribs will provide enough material to create a framework of adequate size.

The cartilage framework is then placed under the skin at the site of the newly placed ear, to match the opposite ear. Additional cartilage may be saved either at the rib donor site or underneath the temporal scalp for use in a later stage. Suction catheters are placed under the skin to create better definition around the framework. They are removed in one to two weeks. Children are usually admitted to the hospital for three to five days.

Several techniques have been adopted for autologous ear reconstruction, i.e. the Brent method and the Nagata method. The differences in these techniques lie in the number of stages required for ear reconstruction (between 2 and 4) and the amount of cartilage needed to make the ear framework. For the Nagata method, children should be closer to 10 years of age to make sure there is enough cartilage to take from the ribs.

Additional stages of repair will follow after your child has fully healed and recovered from the first stage. This typically takes at least 6 months. In the next stage of reconstruction, the new ear framework is elevated off the side of the head to match the natural position of a normal ear. This stage may require the use of a flap of tissue (fascia) from the area just below the scalp or a skin graft to cover the raised framework. Skin grafts are usually taken from the opposite ear or from the scalp, and sometimes from the area above the collarbone or groin.

While the autologous method of ear reconstruction requires more than one stage, one advantage is that using a patient’s own tissue decreases the risk of infection and eliminates the chance of rejection of foreign objects.

An alternative technique for ear reconstruction uses a pre-fabricated artificial porous polyethylene framework to create the ear shape. This framework is then covered by a flap of tissue (fascia) from the side of the head that lies just below the scalp, and a skin graft. Suction catheters may or may not be used postoperatively, and a large pressure dressing is placed. This procedure may be done as an overnight stay or occasionally on an outpatient basis.

The advantage of this method is that no donor rib cartilage is needed, which minimizes discomfort and allows the operation to be done at an earlier age (as early as 3 years old, though the reconstructed ear is made to the adult projected size). In addition, this procedure can be done in one stage.

The main disadvantage of this technique is that a foreign implant is used. This can lead to the potential for exposure of the implant, infection, and intrinsic fracture.

Ear prosthetics, artificial ears attached by adhesives or bone implants, are another way to reconstruct ears. However, ear prosthetics are rarely suitable for children. The prostheses are delicate and expensive, and patient compliance and upkeep are very important to their use and success. They tend to be better suited for adults with acquired ear loss, as they lead a less active lifestyle than children, and are less likely to damage the prostheses.