What are ear deformities

Abnormal development or deformities of the ear anatomy can cause a range of complications, from cosmetic issues to hearing and development problems. An estimated 6 to 45 percent of children are born with some sort of congenital ear deformity.

Some ear deformities are temporary. If the deformity was caused by abnormal positioning in the uterus or during birth, it may resolve as the child grows, the ear unfolds and takes on a more normal form.

Other ear deformities will need medical intervention – either nonsurgical or surgical – to correct the ear anomaly. Because it’s unknown which ear deformities will correct on their own and which will not, it’s important to discuss treatment options as early as possible.

At The Children's Hospital of Philadelphia, experienced otolaryngologists and plastic surgeons assess and treat infants, children and adolescents with a wide variety of ear deformities. 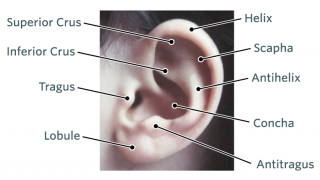 The ear is made primarily of cartilage covered by skin. The earlobe has no cartilage and is made of skin and fat. Although there are some muscles attached to the ear, most people cannot control them, which is why only a small percentage of people can wiggle their ears. The external ear is supplied by four different sensory nerves.

There are several varieties of congenital ear deformities, including:

In some children, an ear deformity is a symptom of a genetic disorder that can affect multiple body systems, such as Goldenhar syndrome and CHARGE syndrome. Ear deformities can be inherited or caused by genetic mutations.

Traditional treatment for ear deformities has been to wait until a child is 5 years old to perform surgical correction. However, we have learned that many of these deformities, if treated early, can be corrected nonsurgically with ear molding.

Unfortunately, we do not know which ear deformities will correct by themselves and which will require surgical treatment later in life. For this reason, it’s important to discuss early nonsurgical ear molding with your child’s physician.

At The Children’s Hospital of Philadelphia, we believe every child with an ear deformity at birth should be examined by an experienced multidisciplinary team to consider if nonsurgical treatment could improve the appearance of the child’s ear. Early intervention is crucial and may help children avoid surgery later.

Because of the increased maternal estrogen levels seen in infancy, infant ears are very moldable, soft and responsive to external ear molding during the first few weeks and months after birth. Learn more about ear molding.

For children with ear deformities that do not respond or are not candidates for nonsurgical correction, surgery may be needed. A team of expert plastic and reconstructive surgeons from CHOP’s Ear Deformities Program will work with you and your child to determine when surgical intervention, such as ear reconstruction, will benefit your child.