What is non-syndromic craniosynostosis?

Craniosynostosis is a condition in which the sutures (growth seams) in an infant’s skull close too early, causing problems with normal brain and skull growth. Non-syndromic craniosynostosis is a non-inherited, isolated finding without related anomalies such as disorders of the limbs, ears or cardiovascular system. It typically involves the early closure of a single growth seam, or suture, in your child’s skull.

Also known as: scaphocephaly
Suture involved: sagittal suture, the seam that runs from the front to the back of the skull
Cause and occurrence: the most common form of non-syndromic craniosynostosis, it typically occurs in prenatal development
Clinical characteristics:

A long and narrow head shape is characteristic of sagittal synostosis.

Also known as: anterior plagiocephaly, unilateral coronal synostosis
Suture involved: one of the coronal sutures, the seams that runs from the ear to the soft spot on top of the baby’s head
Cause and occurrence: the cause is unknown but can be related to underlying associated genetic malformation in upwards of 20% to 30% of cases; it is more frequently found on the left side of the head.
Clinical characteristics:

The right eyebrow is raised with retrusive forehead and the nasal root is deviated to the right in this instance of unicoronal synostosis.

Also known as: brachycephaly
Suture(s) involved: both of the coronal sutures, the seams that run from ear to ear over top of the head and meet at the soft spot in the middle
Cause and occurrence: closure of these sutures prevents normal forward growth of the skull, forcing the head to grow from side to side
Clinical characteristics:

A tall forehead and wide head shape is characteristic of bicoronal synostosis.

Also known as: trigonocephaly
Suture involved: metopic suture, the seam that runs from the top of the head down the middle of the forehead to the nose
Cause and occurrence: early closure of the suture during prenatal development; generally an isolated condition. In rare cases, however, the presence of hypotelorism (close-set eyes) in trigonocephaly can be associated with other congenital anomalies. Of note: the metopic suture closes normally around 6 to 8 months of age. If closure happens slightly early, there may be a small ridge of the forehead, known as a metopic ridge, without further changes to the shape of the skull or evidence of trigonocephaly. Treatment is conservative observation.
Clinical characteristics:

Constriction in the temporal regions and triangular-shaped forehead are characteristic of metopic synostosis.

Also known as: posterior plagiocephaly
Suture involved: one or both of the lambdoid sutures, the two seams located on the back of the skull
Cause and occurrence: very rare and the least common form of non-syndromic craniosynostosis
Clinical characteristics:

Depiction of the typical characteristics of lambdoid synostosis. Note the flatness on the back-right side with bossing (protrusion) on the back left. The right ear is displaced posteriorly (backwards). 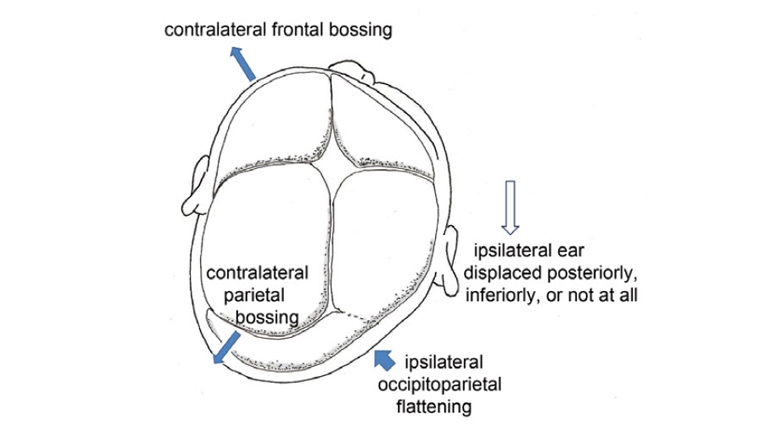 Suture(s) involved: multiple sutures in the baby’s skull, creating a more serious condition than any other form of single suture synostosis; can cause a number of skull deformities
Cause and occurrence: the cause may be sporadic or genetic, though more likely to be associated with a genetic syndrome such as Apert, Crouzon or Pfeiffer syndromes; could indicate underlying brain abnormalities such as hydrocephalus or Arnold-Chiari malformation

Suture(s) involved: minor sutures are extensions of major sutures around the base of the skull
Cause and occurrence: rare; progressive head shape abnormality in the setting of patent (open) major cranial sutures (sagittal, coronal, metopic and lambdoid); surgery may be needed if there is a concern for constriction affecting brain growth or development of elevated intracranial pressure
Clinical characteristics:

Each of these conditions requires a consultation with clinicians who specialize in the treatment of children with craniofacial anomalies. A thorough physical exam may initially diagnose the condition. Confirmation of the diagnosis is done with a 3D head CT scan. The CT scan allows your child’s medical team to closely evaluate atypical findings and rule out any associated anomalies. This is an important step in establishing the best treatment plan if the abnormal head shape is related to craniosynostosis.

Treatment of single suture or multi-suture non-syndromic craniosynostosis depends on the suture involved, the extent of the abnormality, and the age of the child. If left untreated, 10% to 15% of patients with a single suture affected may go on to develop elevated intracranial pressure, thus requiring surgery. The craniofacial abnormalities may also result in severe physical differences.

CHOP’s Craniofacial Program offers the full spectrum of treatment options for patients with non-syndromic craniosynostosis. Your child’s care will be managed by the nation’s top pediatric plastic and reconstructive surgeons working closely with pediatric neurosurgery specialists.

Depending on the age of your child, the type of suture involved, and the degree of deformity, a variety of interventions may be recommended. Learn more about the current surgical treatment approach for children with craniosynostosis »

In mild cases of craniosynostosis, surgery may not be required.

For example, in the case of slightly premature closure of the metopic suture with resulting mild metopic ridge and no other indication of trigonocephaly, treatment is typically conservative observation, as this will continue to change over time.

Watch this educational video to learn more about the treatment approaches available to children with different types of craniosynostosis.

Watch: All About Craniofacial Conditions

Learn about the diagnosis and treatment of craniofacial conditions, including craniosynostosis, hemifacial microsomia, and other syndromes.

Why Choose the Craniofacial Program

CHOP’s Craniofacial Program is one of the Nation’s leading treatment programs for children with both congenital and acquired anomalies of the face and skull.