Published on Dec 17, 2018 in Neonatology Update

A former 36-week gestation female with a prenatal diagnosis of gastroschisis had a complicated medical course following repair of her gastroschisis including compartment syndrome that required multiple exploratory laparotomies, bowel resection with a jejunostomy, and the development of an occlusive thrombus in her superior vena cava (SVC), anasarca and bilateral chylothoraces. She was transferred at 4 months of age to the Newborn/Infant Intensive Care Unit (N/IICU) at Children’s Hospital of Philadelphia (CHOP) for evaluation and management by the Jill and Mark Fishman Center for Lymphatic Disorders and the Division of Pediatric General, Thoracic and Fetal Surgery. Despite successful treatment of the SVC thrombus with alteplase infusion, heparin infusion, and thrombus directed alteplase infusion by interventional radiology, she continued to struggle with anasarca and bilateral chylothoraces and was ultimately referred to CHOP for lymphatic imaging and intervention. 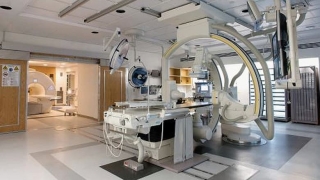 Image 1: XMR Suite Shortly after admission, the patient underwent diagnostic lymphatic imaging and intervention in the XMR suite that combines a magnetic resonance image (MRI) scanner with a cardiac catheterization laboratory (Image 1). An MR lymphangiogram was performed first to map the lymphatic system and revealed an obstructed thoracic duct outlet as well as lymphatic perfusion to the pleural space bilaterally and dermal backflow extending to the perineum (Image 2). Next an MRV and cardiac catheterization were done and confirmed an SVC stenosis just superior and near the azygous vein as the cause of the obstruction of flow from the thoracic duct. Balloon angioplasty and SVC stent placement were also performed in the XMR suite; this resulted in a significant improvement in the size of the SVC and led to resolution of abnormal lymphatic flow to the lungs and soft tissue. 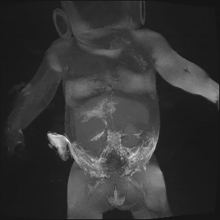 Image 2: MR lymphangiogram This infant’s N/IICU course continued to be complex despite resolution of her lymphatic disorder and she was transferred to the N/IICU neosurgical team. Her first surgery at CHOP was an exploratory laparotomy with lysis of adhesions and revision of the jejunostomy. Six weeks later, she underwent reversal of her jejunostomy, however she developed an acute hemoperitoneum and required emergency surgery with resection of the ileocecal valve and an ileostomy. Despite these complications and the ongoing need for full parenteral nutrition, she is growing well and thriving in room air without recurrence of her chylothoraces or anasarca.

This case highlights how a single prenatal diagnosis of gastroschisis can require multiple subspecialist evaluation and management. The multidisciplinary team approach used to care for this infant allowed us to develop and implement a comprehensive care plan to address all her needs and diagnoses.

Healthcare professionals are invited to subscribe to Neonatology Update to stay up to date on our clinical services, research, educational opportunities and more.