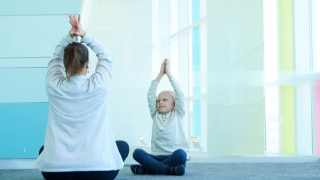 Cameron, 7, gets relief from cancer symptoms during a session with Tonia Kulp, a yoga instructor on CHOP’s Integrative Health team. When Cameron, 7, was first diagnosed with Ewing sarcoma, he would get so anxious during his chemotherapy treatments that he would often throw up.

But when he started working with Tonia Kulp, a yoga instructor on Children’s Hospital of Philadelphia’s Integrative Health team, his nausea stopped. “She taught him techniques to calm himself down, like ‘buzzing like a bee’ and holding the pressure points behind his ears,” says his mom, Kristina. “She was the only one who could get through to him.”

Cameron is one of the many oncology patients at CHOP’s Specialty Care and Surgery Center in King of Prussia who benefit from the center’s yoga program, which was created in December 2017 with support from Julia’s Grace Foundation. The program takes a creative, kid-friendly approach to the popular practice. Instead of leading an organized class with sticky mats and downward dogs, Kulp typically works one-on-one with patients, teaching them breathing, meditation, mindfulness and other yoga techniques to help them cope with issues like anxiety, pain and nausea.

“It can be as simple as inhaling or exhaling through a straw or blowing bubbles or moving a tissue with their breath,” she says. “It’s about giving kids the personal power to find comfort when they are really uncomfortable.”

Stories like Cameron’s have inspired physicians, families and donors to advocate for expanding CHOP’s Integrative Health Program, which — in addition to yoga — offers aromatherapy, acupuncture, massage and other therapies that complement a child’s medical treatment. CHOP oncologist Tracey Jubelirer, MD, and others are leading efforts to expand the yoga program and create a dedicated integrative oncology team.

Additional support of the Integrative Health Program from donor-partners will help oncology patients during their most difficult moments — and it’s something the children will benefit from long after their treatments are over.

“Tonia gives patients tools they can use in other situations when they’re feeling stressed,” says Jubelirer. “They learn that they can use their own minds and bodies to overcome symptoms and pain.” That’s an empowering lesson.