A 10-month-old male infant, M.S., was taken to Children’s Hospital of Philadelphia (CHOP) Emergency Department after having an apneic episode with loss of consciousness for 60 seconds in his pediatrician’s office. M.S. was born at 23 weeks gestation. He was discharged home just 3 weeks prior to this ED presentation on supplemental oxygen and G-tube feeds following a prolonged hospitalization after birth.

Approximately 2 weeks ago, he was seen at an outside ED for increased coughing, tachypnea, and sweating. At that time, he was noted to have a nonfocal chest X-ray and negative respiratory viral panel. He was treated with inhaled respiratory treatments, underwent nasal suctioning, and, per maternal report, returned to baseline. He was discharged home the same day. Over the course of the next 2 weeks, symptoms persisted, particularly surrounding G-tube feedings. Mother was in contact with outpatient Pulmonology and was initiating infant’s flare plan, which included increasing Albuterol, Atrovent®, and QVAR® treatments, and extending out the length of his G-tube feeds. On the night prior to admission, M.S.’s work of breathing and retractions worsened.

Upon his presentation at CHOP ED, his oxygen saturations were noted to be in the 80s, and on physical exam he had significant subcostal retractions and tachypnea. 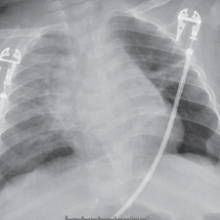 Figure 1: CXR at ED visit concerning for pneumonia As part of M.S.’s initial workup in the ED, he had a rapid respiratory panel (RRP) sent that was positive for rhinovirus and a chest X-ray concerning for pneumonia (see Figure 1). Initial treatment modalities included airway clearance, steroids, inhaled bronchodilators, and increasing noninvasive respiratory support from nasal cannula to BiPAP. He was admitted to the PICU. Given his history of chronic lung disease (CLD) and new diagnosis of a viral URI, there was a risk he would have a severe respiratory decompensation.

Chronic lung disease, also referred to as bronchopulmonary dysplasia (BPD), is the most common chronic respiratory complication in preterm infants. Infants with birthweight <1 250 grams account for 97% of cases. CLD occurs as a consequence of poor lung development and lung injury, from external factors — such as mechanical ventilation, oxygen toxicity, infection, and inflammation — to the underdeveloped, preterm lung. Such injury leads to alveolar simplification, potential airway damage, and defects in the development of pulmonary vasculature. These effects on the preterm lung can last well beyond the initial NICU admission and leave many patients with long-term respiratory issues.

During his PICU admission, M.S. required an increase in noninvasive respiratory support and completed a burst steroid course, and he received higher doses of his baseline diuretic therapies. He was discharged home after 4 inpatient days. Over the course of the next 1 to 2 months, M.S. was admitted to the hospital 3 more times with similar symptoms. During one admission, he was diagnosed with coronavirus bronchiolitis. During each hospitalization, he required increased respiratory support and steroids. M.S. also had numerous sick visits with his PCP and primary pulmonologist due to respiratory symptoms.

M.S. has subsequently weaned off of supplemental oxygen. He still requires his G-tube for feedings, but works on his oral skills with speech therapy. During his most recent routine outpatient visit, M.S. was noted to have oxygen saturations of >95% in room air with clear and adequate air entry on auscultation. He has good activity levels, with tachypnea and intermittent wheezing noted with extended activity. At baseline he has occasional episodes of diaphoresis, even at rest. He has since been diagnosed with moderate persistent asthma.

M.S. has some developmental delay, but is making good progress and is followed by multiple CHOP subspecialties, including Pulmonology, Cardiology, Gastroenterology, Nutrition, Ophthalmology, Physical Therapy, and Speech Pathology.

The Newborn and Infant Chronic Lung Disease (NeoCLD) Program at CHOP specializes in the care of preterm infants with severe CLD. After managing more than 400 infants with severe CLD, we have learned there is a complex interaction between lung development, lung injury, and repair with multisystem morbidities. Therefore, care models need to be directed toward longer-term adequate respiratory and nutrition support to improve lung growth and minimize further lung damage.

Figure 2. Left: CXR at the time of M.S.’s initial CHOP NICU admission showing severe lung disease with large cystic changes. Right: CXR before NICU discharge showing improvement in lung disease. Infants and children with a history of CLD do not have “normal,” healthy lungs. Despite NICU resolution of major symptoms, improvement in chest X-rays, and weaning off respiratory support at the time of NICU discharge, they remain vulnerable to acute respiratory decompensations. Their dysfunctional pulmonary dynamics, as well as likelihood for multiple comorbidities, make them susceptible to increased illness from infections, aspiration events, development of pulmonary hypertension, and obstructive airway disease, such as asthma, to name just a few. Of note, these patients are at a particular risk for poor neurodevelopment, as well as delayed growth.

The broad range of potential comorbidities is why a multidisciplinary approach is important to optimize outcomes. Primary care providers must have a heightened awareness when this population presents with otherwise simple illnesses, such as the common cold, given that their lung pathology can put them at risk for rapidly progressing illness.