An exciting new initiative at CHOP is helping unlock the secrets of children’s DNA. 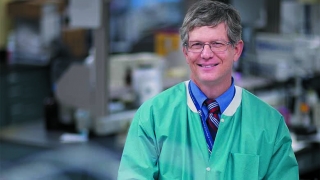 For parents-to-be, this may be their very first parenting decision. Say no, and you delay one of life’s greatest surprises. Say yes, and the planning kicks into high gear: You can paint the baby’s room, buy the right clothes, start imagining your life in the years ahead in ballet recitals, model trains or T-ball games.

So what do you say?

There’s no wrong answer, of course. Either way, your child’s life won’t be affected. But in the years ahead, CHOP doctors envision the questions getting much harder.

As our understanding of DNA expands exponentially, doctors are beginning to see things in our genes that may predict a child’s future — and not always a rosy one. Would you want to know if your newborn is at high risk for early-onset Alzheimer’s disease? Or cancer? If he or she was likely to have a greatly shortened lifespan, would you want to know?

This isn’t idle musing. Gene sequencing and molecular testing is revealing more and more each year, and that offers terrific potential to diagnose diseases and find new ways to treat them. But sometimes unexpected, unrelated information turns up as well. Genomics has propelled us into a brave new world.

“This is changing the face of medicine,” says Robert Doms, MD, PhD, pathologist-in-chief, a CHOP President’s Scholar and the T. Hewson Bache Endowed Chair in Pediatrics.

Doms, a giant in HIV/AIDS research, was recruited to CHOP to build the preeminent genomic diagnostic program in the country. “For the first time,” says Doms, “we can really peer into somebody’s cells, peer into their DNA and understand why they are suffering.”

If doctors are like detectives hunting a diagnosis, then pathologists like Doms are the ones in the CSI lab running tests on the evidence. Today, these tests are incredibly powerful. Next-generation gene sequencing allows researchers to look at all 3 billion pieces of your DNA at once. What took the Human Genome Project a decade and a billion dollars to decode can now be done in a week for a few thousand dollars. It is happening around the clock at CHOP.

However, this blueprint also shows the skeletons in the genetic closet.

“We’re finding genetic changes that may affect our patients’ future health,” says Nancy Spinner, PhD, director of the Division of Genomic Diagnostics and the Evelyn Willing Bromley Endowed Chair in Pathology and Clinical Laboratories. If these findings are what scientists call medically actionable, the next step is clear: They have an ethical obligation to tell patients and families what they’ve found.

But what should doctors do if they discover that a child has a gene that predisposes him to an incurable disease? What if there were implications for the other children, or even the parents?

Scientists acknowledge that just about every person could have incidental findings of some sort. Nevertheless, Spinner and her husband, Ian Krantz, MD, a CHOP pediatrician and clinical geneticist, are trying to help doctors answer those tough questions. They are conducting a federally funded $9 million study to understand what genomic information patients and parents want to know and how doctors should handle any incidental genetic data.

“There’s been a lot of research on the effect of people learning some of these things,” says Spinner, “and it’s not always negative, even if you can’t do something. People are glad to have the information and can make decisions accordingly.”

For Doms, the ethics are still cloudy, but the potential of next-generation sequencing is crystal clear. “We’ll find cures,” he says. “The technology allows us not only to understand disease, but find ways to cure or prevent it altogether.”

“The information we are gathering right now will be very useful to these children when they become adults,” adds Curran. “Now is the time to be paying attention to children and children’s health studies because you’re laying the groundwork for future healthy adults.”