Researchers have long understood that an important connection exists between inflammatory bowel disease (IBD) and a patient’s genetics. However, identifying mutations associated with the disease is just one piece of the puzzle needed to develop new targeted therapies.

New research from Children’s Hospital of Philadelphia (CHOP), published online on May 6 in the journal EMBO Reports, has pinpointed how one particular protein may be implicated in how epithelial cells – cells that line the surfaces of the body and our organs – respond to stress as a result of IBD. 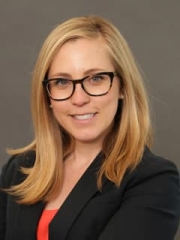 Kathryn E. Hamilton, PhD, a researcher in the Division of Gastroenterology, Hepatology and Nutrition at CHOP, and her colleagues focused on the RNA binding protein IMP1 and its connection to both epithelial cells and autophagy, a cellular recycling process that takes degraded cellular material and transforms it into new cellular components. IBD is an example of a disease in which autophagy is not working properly.

“More than 200 IBD risk alleles have been identified, but since this knowledge is not enough to develop new treatments, we’re trying to look at how epithelial cells in patients with IBD actually function differently than people without IBD,” Hamilton said. “We are interested in not just the genes themselves, but what happens following transcription, after a gene has provided instructions for making the protein that carries out the cellular function, and what problems might be occurring along the way.”

The study found that expression of IMP1, a factor that regulates what happens between transcription and protein translation, is higher in patients with Crohn’s disease and ulcerative colitis, the two major types of IBD. The team’s findings suggest that high IMP1 expression could be a response to chronic stress or inflammation, which could hinder the ability of autophagy to promote epithelial repair. Hamilton also said the study suggested that Paneth cells, an important component of the mucosal barrier in the gastrointestinal tract, might also be implicated in autophagy dysfunction and regulated by IMP1.

“Our findings suggest that if we can manipulate IMP1 expression levels, we may be able to improve patient recovery in IBD,” said Hamilton, adding that investigating those mechanisms are a key area for further research.

In addition to her work studying IMP1, Dr. Hamilton and her team are working with Judith R. Kelsen, MD, Director of the CHOP Very Early Onset IBD(VEO-IBD) Program, to study epithelial cells directly from patients.

“We are able to take patient stem cells and grow them as ‘mini-guts’ in a dish in order to understand how cellular behavior is different in patients with VEO-IBD compared to healthy children,” Hamilton said. “Our goal is to define new therapies that directly improve epithelial cell health, which remains a significant clinical barrier for patients with IBD.”