As told by Tracy, Bryce's mom 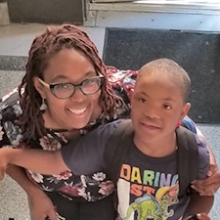 When Bryce came into the world on a warm August afternoon in 2011, we had no prior indication that he would be born with Down syndrome. We were told he had some "Down syndrome characteristics" and that genetic testing would be done to confirm.

Immediately my heart sank. I'm not going to lie, I was devastated about the possibility of not having what I considered a "normal child." I remember sobbing uncontrollably after we received the official diagnosis and wondered how we are going to raise him with all of the challenges that laid ahead.

I remember looking over at my husband, Eric, as we watched Bryce sleep in the NICU and saying, "I'm sorry that he's not going to be like our other boys."

"What do you mean," Eric said. "He is like our other boys and we won't treat him any different."

It was at that moment I felt a weight lifted from my body and, little did I know, Bryce was a special gift that God had planned for our family.

I'm not going to say this journey has been easy, because it hasn't. I'm sure we're not the first, nor will we be the last, parents dealing with multiple specialists and therapy appointments. But through it all, we have been able to pray through the tough times and laugh through the good times.

Bryce has taught us so much about being resilient. There are times when I feel so defeated when it comes to dealing with his educational needs that I just want to pull my hair out. But then I'll see him trying to put on his pajama pants and succeeding after multiple tries or watch him brush his teeth in the bathroom mirror. These actions put everything in perspective for me.

Do we still have a long way to go? Certainly! He's only six. But we love being on this roller coaster ride of life with Bryce. We enjoy the laughter and excitement that he brings to our family.