Clement Ren, MD, MBA, joined the Division of Pulmonary and Sleep Medicine in July and will lead the Cystic Fibrosis Center. 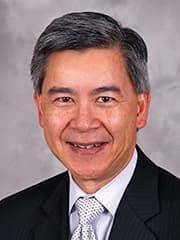 Clement Ren, MD, MBA Dr. Ren earned his MD at The University of Chicago, Pritzker Medical School, and following his residency in Pediatrics and a fellowship in Immunology/Allergy at Boston Children’s Hospital, he completed a fellowship in Pediatric Pulmonology at St. Christopher’s Hospital for Children. He comes to Philadelphia from Riley Hospital for Children in Indianapolis, IN, where he was Associate Chief of the Division of Pediatric Pulmonology, Allergy and Sleep Medicine, Director of the Cystic Fibrosis Center and Director of the Pediatric Pulmonary Function Laboratory.

Q: Your first fellowship was allergy and immunology. What was behind your move to pulmonary medicine?

A: I decided the basic immunology research I was doing didn’t fit well with my clinical interests. I had enjoyed the elective of Pulmonology as a resident, and in Allergy, we saw some asthma patients, so there was some overlap. I had to make a career path decision, and I decided to become a pediatric pulmonologist. I was already interested in cystic fibrosis (CF) back then. In the late ’80s, early ’90s, CF was a very different condition. We would have eight to 10 inpatients at a time. Unfortunately, we saw a lot of deaths with CF then, which we definitely don’t see now. There have been many breakthroughs in CF treatment.

Q: Tell us a little about your CF research.

A: We’ve made great progress in CF. New medicines like Trikafta® have fundamentally changed CF. But they’re not cures. The question becomes: What’s left to answer about CF? There are three broad areas. There are still a large number of people, especially adults, who have irreversible disease and need treatment. Second, we need treatments for the 10% of people who can’t benefit from medicines like Trikafta and ultimately a cure. The third area, which is the focus of my research, is we need to understand how effective these medicines are at changing the course of CF early in life. To do that, we need to have better tools to assess lung function early in the disease.

The overall focus of my research has been to improve and develop better tools to assess early lung disease in children and infants with CF. I started with advanced types of lung function testing, and I’ve led several studies related to that. More recently, I’ve also moved into imaging, primarily using MRI because it doesn’t involve radiation. As things have evolved, I’ve also broadened out to other areas like home monitoring, a novel home-based app where we can remotely assess symptoms and changes a patient may experience while on medicines. Since coming to CHOP, I have also started a project exploring the use of electrical impedance tomography in assessing CF lung disease. I also do a lot of CF epidemiology, looking at outcomes using the CF Foundation patient registry, especially surrounding infants and newborn screening.

Q: What do you envision for the direction of CHOP’s Cystic Fibrosis Center?

A: CHOP is already a widely recognized center of excellence for treating children with cystic fibrosis. I think there are opportunities for us to be leader in all areas of CF, including research into all the problems associated with CF. CF is an interesting condition in that, even though CF centers are led by pulmonologists and lung problems are a major emphasis, it also involves things like diabetes, GI problems and other problems. The great thing about CHOP and Penn is we have researchers from a variety of disciplines all focused on CF. My goal is to unify that and find synergies to elevate CHOP as a leader in all aspects of CF research.

Once we learn about things through research — say we find that MRI is really effective at assessing early lung disease in CF infants and young children — then how are we going to get that information out to advance patient care nationwide? That involves quality improvement and implementation science.  CHOP can play a larger role in that. CHOP has a unique opportunity to really have an impact on everybody with CF, which is one reason I came here.

Our CF Center can also contribute to advancing remote care and telehealth.  We recently received a grant from the CF Foundation to develop tools and resources for implementation of clinical use of pediatric home spirometry in CF.  This is a multi-center project being done in collaboration with Children’s Hospital of Pittsburgh and Riley Hospital for Children.  These tools will be available for all CF Centers across the country, further contributing to CHOP’s status as a leader in all areas of CF care and research.

I also care a lot about the patient and family experience. It’s important to deliver great care, of course, but I also want families to have a great experience at CHOP. I’ll be looking for areas to improve there, too.

Q: In addition to CF, what are your other pulmonary interests?

A: I’ve been involved in studies on respiratory complications of prematurity, like bronchopulmonary dysplasia. In fact, I have a current study with Sara B. DeMauro, MD, a CHOP neonatologist. Between the Newborn and Infant Chronic Lung Disease Program and the Post-preemie Lung Disease Clinic, the division has a lot of expertise in this area. I’m eager to contribute where I can.

Q: What do you do for fun outside of medicine?

A: The two things I spend time on when I’m not at work are pets and cooking. We have a cat and three dogs: a German shepherd, a Belgian Tervuren and a Samoyed. When it comes to food, I cook everything. Recently, I’ve made enchiladas, kedgeree, and paella (I like Spanish food a lot). I also cook a lot of Chinese, Vietnamese and Korean food. I also enjoy exploring restaurants in Philadelphia.

Q: You spent time in Philadelphia during your pulmonary fellowship. Are there places from that time that you are looking forward to visiting again?

A: When I was at St. Chris, I did a compressed fellowship in two years because I had already satisfied the research requirements. I spent almost all my time in clinical rotations, and it was really, really busy. In all honesty, I did almost zero outside the hospital. I didn’t go to Independence Hall or Rittenhouse Square; I didn’t have time. But now I will.