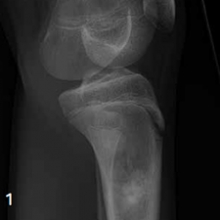 Figure 1: X-ray of the side of the tumor, with white areas in the upper tibia indicating the bone formation from the osteosarcoma. A.K., a 14-year-old male, began experiencing pain in his lower left leg during a period of intense training for a world-class cycling event. Thinking it was due to overexertion, he did not initially seek treatment, instead treating it with RICE — rest, ice, compression, elevation — and pushing through the pain to compete. When he limited his training following the race and the pain remained, he visited his pediatrician. A.K. was otherwise systemically well. He did not have any fevers or weight loss. Other than his leg pain, he had no other complaints. The pediatrician sent him to a sports medicine specialist.

On examination, he had full range of motion of the left knee and mild tenderness over the upper tibia. There was no discrete mass. He had normal strength and sensation in the extremity. An X-ray was concerning for a lesion in the upper tibia (see Figure 1). An MRI was ordered, and it confirmed a marrow infiltrative process in the proximal portion of the tibia. 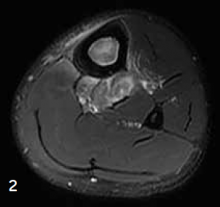 Figure 2: The soft tissue extension of the tumor from the bone is shown on a cross section (axial) MRI. There was a small soft tissue component extending from the tibia (see Figure 2). Based on the MRI results, A.K. was referred to Children’s Hospital of Philadelphia for further evaluation.

Under the direction of CHOP’s Bone and Soft Tissue Tumor Program, a collaboration among the Cancer Center, Orthopaedics, Radiology, and Pathology, A.K. underwent an ultrasound-guided needle biopsy that confirmed an 8 cm osteosarcoma in his left tibia, just below the knee.

Osteosarcoma is the most common malignant bone tumor among children, adolescents, and young adults, but it is still a rare disorder, affecting approximately 400 children younger than age 20 in the United States annually. Osteosarcoma occurs most often between the ages of 10 and 20 and often during a growth spurt.

The treatment for osteosarcoma was then discussed in detail with A.K. and his family, and they provided their consent to proceed. The treatment includes 29 weeks of chemotherapy, most of which require inpatient hospitalization. Chemotherapy causes multiple side effects, including hair loss, nausea/vomiting, and increased risk of infection. A.K. and his family were taught how best to manage these side effects.

After the first 8 weeks of treatment, his imaging studies were repeated and a surgical plan was made. In A.K.’s case, MRI scans before and after initial chemotherapy showed the osteosarcoma had come close to the physis (or growth center in the upper tibia) but spared the knee joint. Given his age and passion for cycling, preserving the knee joint was paramount. If the knee joint were not preserved and a megaprosthesis were used, the patient would likely require a replacement joint surgery every 10 years or so for life. Over time there is less available bone to work with, and the patient would be at higher risk of infection or other complications with each invasive procedure. 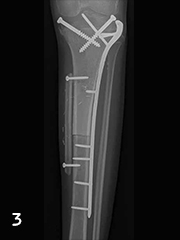 Figure 3: Post-surgery front X-ray demonstrates the combination of cadaver bone, vascularized fibular graft and steel rod. A proximal tibial transepiphyseal resection was performed to remove the tumor safely and maintain the knee joint. Using a combination of a cadaveric allograft and biological reconstruction with a vascularized fibular graft, the strength and durability of the lower leg was maximized. Microsurgery was required to enhance bone healing by transferring the contralateral fibula as a free flap. Plate and screw fixation was performed to stabilize the construct (see Figure 3). A.K.’s patellar tendon was reconstructed to the allograft patellar tendon for maximal healing.

After consultation with A.K. and his family, exploring the risks and rewards of future leg-lengthening surgery and taking his current height into consideration, the decision was made to halt growth in the contralateral proximal tibial physis. Postoperatively A.K. was maintained in a knee brace in full extension for 6 weeks followed by physical therapy to work on strengthening and eventually knee range of motion. He was kept on crutches and a protected weight-bearing status until healing was noted on radiographs.

Following surgery, A.K. completed his planned chemotherapy course. Chemotherapy is difficult, but with the support of his family and care team, A.K. ended his treatment in remission.

At A.K.’s 6-month check-up, the upper bone graft junction had healed. The lower site is not completely healed yet, likely due to the anti-healing effects of chemotherapy. He is still restricted from jumping and running, but he reported a return to cycling with no loss of strength/range of motion of the knee.

CHOP recognizes that the stress is immense for families facing a potential sarcoma diagnosis. Since time is of the essence, patients with suspected bone tumors are seen at the Bone and Soft Tissue Tumor Program within 24 to 48 hours of referral and receive an expedient diagnosis. Oncology is available for same-day appointments. Benign tumors are managed by orthopaedic oncology.

CHOP has treated more than 200 patients with CAR T-cell therapy, making us one of if not the busiest cell therapy center in the world.