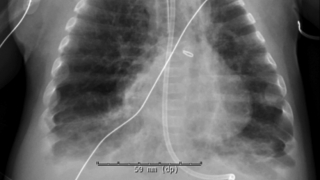 Figure 1. Admission chest X-ray showing severe hyperinflated right lung herniating to the left. An ex 25-week male infant was transferred to the Newborn/Infant Intensive Care Unit at Children’s Hospital of Philadelphia at 4 months of age for further management by the Newborn and Infant Chronic Lung Disease Program. Except for a brief trial of extubation for a few days, the infant was on mechanical ventilation for most of his first four months of life. Despite trialing on different ventilation modes (conventional ventilation, high frequency oscillation, high frequency jet ventilation), PDA ligation, antibiotic treatment for suspected sepsis and tracheitis, and three courses of systemic steroids, he had progressively worsening respiratory failure with severe right lung hyperinflation (figure 1) and frequent episodes of severe CO2 retention to PCO2 over 100mmHg. 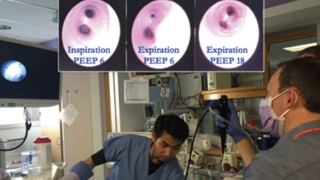 Figure 2. Bedside flexible bronchoscopy demonstrating severe airway collapse on low PEEP. Prior to transfer, the infant was on a jet ventilator with peak inspiratory pressure (PIP) 50 cmH2O, positive-end expiratory pressure (PEEP) 7cmH2O, rate 420 with 3 sigh breaths and 50% oxygen. Upon close observation of his pulmonary mechanics after admission, he was placed on a conventional ventilator with PEEP increased to 14cmH2O. However, he continued to have episodic events of severe agitation and hypercarbia to over 100. Airway malacia was suspected after the initial evaluation. A bedside flexible bronchoscopy was then performed in collaboration with pulmonary and confirmed severe tracheal and bronchial collapse during expiration on low PEEP levels (figure 2). In addition to severe CLD, CT angiogram and perfusion scan demonstrated severe air trapping in the right lung with poor perfusion to the right upper lobe (figure 3). 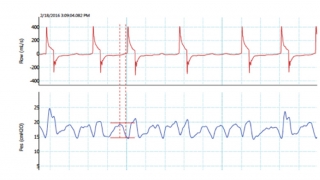 Figure 4. Intrinsic PEEP measurement via esophageal manometry. In order to determine the optimal PEEP level for this child, he was enrolled in the intrinsic PEEP measurement study, which demonstrated severe patient-ventilator asynchrony on lower PEEP. The study found an intrinsic PEEP of 20 in this patient (figure 4). His ventilation significantly improved with much less episodic events after he was placed on PEEP of 20. After multiple team discussions and communication with parents, the patient underwent right upper lobectomy and, later, tracheostomy placement. Currently the baby is doing well in the Progressive Care Unit, successfully transitioned to a home ventilator, and his parents are receiving extensive training in tracheostomy care.