Chad’s odds of survival at birth were low after being diagnosed in utero with a severe form of congenital diaphragmatic hernia (CDH). But he surprised everyone with his resiliency. Multiple surgeries and ongoing treatment for associated pulmonary hypertension have helped him get to where he is today — an engaged 11-year-old who makes people around him smile.

Kelli and Michael were excitedly expecting their first child when a routine 20-week ultrasound brought unsettling news. The ultrasound couldn’t clearly see their baby’s heart, and their physician recommended they go to a hospital for a higher resolution scan.

At first, Kelli wasn’t terribly concerned. “I just thought the machine in the office wasn’t as good as the hospital ultrasound machine,” she remembers.

Unfortunately, the next ultrasound confirmed there was cause for concern. A doctor at their local hospital told the couple that their unborn child had congenital diaphragmatic hernia (CDH). CDH occurs when the diaphragm muscle fails to close during prenatal development, allowing organs in the abdomen to push up into the chest cavity. The couple was referred to Children’s Hospital of Philadelphia (CHOP) for additional testing and care.

After a detailed multidisciplinary evaluation at CHOP’s Center for Fetal Diagnosis & Treatment, Kelli and Michael were told that their son’s CDH was very severe. His entire liver was in his chest cavity, along with his bowel and intestines. His heart was pushed to the left, his left lung was compressed and he had no right lung. The outlook was not hopeful.

“It was the most devastating news we had ever heard,” says Kelli “Over the next few days we went through all the emotions — denial, anger, bargaining, depression and finally acceptance that he might not live.”

Despite the severity of the CDH, the team at CHOP was determined to do everything in their power to save Kelli and Michael’s son. CHOP sees a large volume of CDH patients each year, experience that made them well-prepared to handle such a complex case. Kelli and Michael felt they were in the place that would give their son the best chance of growing up to have a full life.

Kelli’s prenatal care was transferred to CHOP and the Hospital of the University of Pennsylvania (HUP) where she would deliver her son. (This was before the opening of CHOP’s Garbose Family Special Delivery Unit, which now enables women carrying babies with known birth defects to deliver directly at CHOP.)

Chad was born on March 18, 2006, and immediately transferred to CHOP’s Newborn/Infant Intensive Care Unit (N/IICU). He did better than expected at first, breathing with the help of a ventilator. But after 10 hours, he was put on extracorporeal membrane oxygenation (ECMO), a mechanical treatment that takes over the functions of the heart and lungs to allow the organs time to rest.

When Chad was 12 days old and his life still sustained with ECMO, pediatric surgeon Holly Hedrick, MD, performed surgery to repair the CDH. She closed the hole in his diaphragm, pushing his abdominal organs down and relieving the pressure on his heart and lung. After another almost two weeks on ECMO, Chad was successfully weaned from the machine, and his heart and lung resumed their functions with support from a ventilator.

Managing pulmonary hypertension and other complications

Due to the severity of his CDH, Chad still had a long road ahead of him. With so many of his abdominal organs pushed up into his chest during prenatal development, his one lung had very limited room to grow, resulting in pulmonary hypoplasia, a condition characterized by small, underdeveloped lungs. Pulmonary hypoplasia can not only affect breathing but also heart function, feeding, hearing and overall development.

Chad also developed pulmonary hypertension, or high blood pressure in the arteries of the lungs, a condition frequently associated with CDH.

Pulmonary hypertension can be a progressive condition, worsening over time if left untreated. As the pulmonary arteries shrink, pressure builds, making the heart work harder to get blood to the lungs, which can lead to heart failure. Under the close supervision of pulmonologist Howard Panitch, MD, and cardiologist Brian Hanna, MDCM, PhD, Director of the Pulmonary Hypertension Program, Chad slowly but surely gained strength as the medical team found the right balance of treatments to manage his pulmonary hypertension.

During his 10 months in the N/IICU, Chad required another surgery to reposition his stomach and prevent reflux. He also had a feeding tube (gastrostomy tube, or G-tube) inserted. And when it was determined that Chad would require long-term ventilation, a tracheostomy to help him breathe. 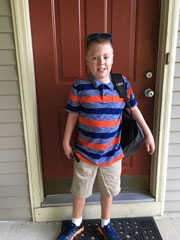 Chad went home with the tracheostomy and ventilator, and G-tube for feeding. The family had home nursing for the next 4½ years to help with Chad’s complex care.

As part of his ongoing care, Chad is also followed by the Pulmonary Hypoplasia Program, where a multidisciplinary team works together to monitor for potential long-term complications due to his underdeveloped lungs. This includes ongoing developmental assessment, improving pulmonary health, meeting nutritional needs, and monitoring for any surgical issues or late onset hearing loss.

Chad experienced some developmental delays, but with the help of early intervention services, he steadily caught up as his health continued to improve. He learned to walk at age 2 while connected to the ventilator (his parents have video of him pushing the tubes out of his way as he takes early steps). Chad ate his first meal when he was 4. His tracheostomy tube was removed at age 5, and his feeding tube removed at age 7. By the time he entered first grade, he had caught up to his peers developmentally. Chad was fully weaned off ventilator support by 2010.

“Dr. Panitch is always checking in with us. He helped wean Chad from ventilator support,” says Kelli.

Chad takes medication to manage his pulmonary hypertension, and comes back to CHOP every three months so his medical team can keep an eye on his progress and make sure his condition remains stable.

“Dr. Hanna has given Chad the quality of life he has today," Kelli says. "When we come see him, he talks with Chad, not just with us.”

Except for the medication and follow-up appointments with his medical team, Chad is leading the normal life of an 11-year-old boy. He loves computer games, and has started to learn coding. For a child who didn’t eat solid food for his first few years, he’s come to appreciate good food, and has a special love of seafood.

“He is great kid and his personality just shines,” says Kelli. “He puts smiles on so many people’s faces.”

Kelli and Michael are thankful for the many people who played a role in Chad’s recovery and positive outcomes, including his doctors, nurses, respiratory, physical and speech therapists, and child life specialists. She has special gratitude and affection for the three doctors who have provided the key elements of Chad’s care over the years.

“Without their expertise Chad would not be with us.” 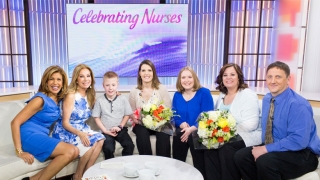 Tracy Widmer, RN, MSN, CRNP and Anne Marie Kohler, RN, are reunited with a patient they cared for 10 years ago.