Milana’s medical story began with a routine prenatal ultrasound. At that 18-week visit, her parents, Elizabeth and Arthur David, were told that their child had congenital diaphragmatic hernia (CDH). A hole in their baby’s diaphragm muscle allowed her stomach, spleen and intestines to squeeze up into her chest, displacing and putting pressure on her developing heart and lungs.

Elizabeth, herself a registered nurse, did her own research and confirmed that the malformation was a serious concern. CDH is a potentially life-threatening condition that reduces the size of the lungs and requires surgery to correct the hernia.

Both parents were in shock. Fortunately, their doctor in Miami was familiar with the condition and helped them with some important next steps. First, Elizabeth had a fetal MRI to observe the size and location of the hernia, and then a test of the amniotic fluid to find out if the condition was tied to any genetic abnormalities that might reduce the baby’s chance of survival. The results showed no genetic issues, which was good news. Their doctor then recommended that the family seek treatment at Children’s Hospital of Philadelphia (CHOP). She explained that the medical team at CHOP had the expertise to provide the care their daughter would need after birth.

A month later, the couple met with Holly Hedrick, MD, Attending Pediatric and Fetal Surgeon at CHOP's Richard D. Wood Jr. Center for Fetal Diagnosis & Treatment in Philadelphia. A planned day of tests and advanced fetal imaging ended in a meeting with Dr. Hedrick and others on the medical team.

Elizabeth and Arthur David were told that their baby had a good chance of survival, based on the liver position in the abdomen and the size of her lungs relative to her head. She also had a lung lesion on the left that could potentially impact lung function. It would be critical for her to receive expert multidisciplinary care at birth until she was strong enough to undergo surgery to close the hole in her diaphragm.

Elizabeth and Arthur David returned to Miami, where they explored local options for treatment. Nothing came close.

“The decision to choose CHOP was a no-brainer,” says Elizabeth. “The expertise of the medical team and the quality of the facilities were both so much better than what was available near home.”

With the help of the CHOP team, they made arrangements to make the move to Philadelphia, where Elizabeth would be closely monitored for the remainder of her pregnancy until it was time to deliver in the Garbose Family Special Delivery Unit (SDU). Housed within the Richard D. Wood Jr. Center for Fetal Diagnosis & Treatment, the SDU was created specifically for healthy mothers carrying babies with known birth defects. There, Milana would get the immediate medical care she needed upon delivery.

Milana was born in early July. CHOP’s dedicated Neonatal Surgical Team was waiting to stabilize her, and she was immediately put on a ventilator and taken to the Harriet and Ronald Lassen Newborn/Infant Intensive Care Unit (N/IICU).

“I was a nervous wreck,” remembers Elizabeth. “I didn’t know if she would survive. I got to see her for a brief moment in the delivery room, then when I was able I would sit with her in the N/IICU.”

Elizabeth has nothing but praise for the nurses in the N/IICU. “They go above and beyond the call of duty. The doors were always open to me, day and night. But I felt so much confidence in them that I could leave overnight to spend time with our older daughter and to get the sleep I needed.” 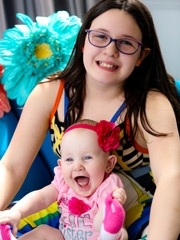 Milana with her big sister Milana did well on the ventilator at first, but on her third day she stopped responding and was put on a high-frequency (or oscillating) ventilator. That kept her going for the next four weeks until her condition was deemed stable enough for the surgery.

Dr. Hedrick performed the surgery, which went well. Depending on the size and location of the opening in the diaphragm, different options are available to close it. In Milana’s case, she had enough diaphragm to undergo a primary repair, and the diaphragm was sewn closed.

Milana soon showed signs of rebounding health. Two weeks after surgery she started feeding, and about the same time came off the ventilator. With support from speech and occupational therapists, she began sucking and swallowing. A month after that, she was ready to go home with her family to Miami. She had been in the N/IICU at CHOP for 69 days.

Feisty and a fighter

Since her release from the Hospital, Milana has continued to thrive. She has hit all the key developmental milestones within the normal range. She started eating solid food at 9 months and walked at 14 months.

Now almost 2 years old, she is active, talkative in English and Spanish, “and bossy,” her mother adds with a smile. Her lungs are smaller than normal for a child her age, but will continue to grow until she’s about 8 years old. The lesion in the chest, a bronchopulmonary sequestration, is being monitored and will hopefully continue to decrease in size as she grows. Milana also has mild reflux, which is treated with medication. None of those issues slow her down.

Her parents bring her to CHOP for annual follow-up visits with Dr. Hedrick and other specialists as part of the Pulmonary Hypoplasia Program. Between those trips, she has periodic appointments with her pediatrician in Miami to monitor the development of her heart and lungs and to check that her reflux is under control. The results of those tests are shared with the team in Philadelphia to ensure smooth coordinated care. 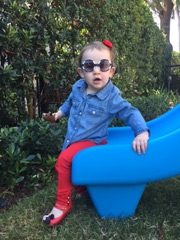 Elizabeth recalls a conversation with Milana’s primary nurse practitioner in those early scary days in the N/IICU. Elizabeth wanted her honest opinion on whether she thought Milana was going to make it. “She’s feisty,” the nurse told her. “You could tell she was a fighter from day one. Those are the ones who do well.”

Milana is still feisty. There’s no holding her back when she wants to go down the slide by herself, race and play ball with her 11-year-old sister, or drink from a big girl cup without a lid. Her parents and sister wouldn’t trade it for a thing.