Going into their 20-week prenatal scan, Alyssa and Louis were not expecting to learn their son had a hole in his diaphragm allowing his liver and stomach to move into his chest cavity and severely limiting the room his lungs needed to grow.

The radiologist at their community hospital told the couple they should consider terminating the pregnancy. “We were heartbroken, but not ready to give up,” Alyssa says. 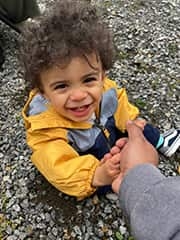 Hendrix is thriving after treatment before birth to treat CDH. Fortunately, the head of maternity at the same hospital recommended the couple seek more detailed imaging and an expanded prenatal workup at the Richard D. Wood Jr. Center for Fetal Diagnosis and Treatment at Children’s Hospital of Philadelphia (CHOP). He even called to schedule the appointment for them.

Dr. Moldenhauer, a maternal-fetal medicine specialist, reproductive geneticist and Director of Obstetrical Services at CHOP, explained the baby’s condition in detail. The baby had a severe form of congenital diaphragmatic hernia (CDH), causing his internal organs to shift and limiting the amount of room his lungs had to grow. If not treated before birth, his lungs would be severely underdeveloped, making it difficult for him to breathe after birth.

Dr. Hedrick, a pediatric and fetal surgeon, described a possible treatment that could be performed before the baby’s birth – fetoscopic endoluminal tracheal occlusion (FETO).

CDH can be a devastating diagnosis for an expecting parent to receive. But for a select group of babies with the most severe form of CDH, treatment before birth may help.

This minimally invasive procedure involves placing a balloon in the unborn baby’s airway to stimulate lung growth, which may improve survival. CHOP began offering FETO as a treatment option to select fetuses with severe CDH in 2015. The team encouraged the couple to ask questions and connect with other parents who’d gone through similar experiences before making their decision.

“The doctors at CHOP gave us so much hope – it was such a contrast to our previous imaging experience,” Alyssa says. “They were so calm, comforting and competent. They really wanted us to decide what was right for our family.”

After the appointment, the couple headed home to do more research about CDH and FETO as a possible treatment. What they learned about CHOP’s experience impressed them. Not only did CHOP treat a large volume of patients with CDH, but clinicians were also familiar with the unique issues affecting these children over the long-term, leading to unparalleled condition management and improved outcomes.

“We felt really comfortable with the team and everyone we talked to said to go to CHOP for CDH treatment,” Alyssa says. The couple was also pleased to learn about the abundance of support services CHOP offered.

By their next prenatal appointment, Alyssa and Louis had made their decision. “We decided to go ahead with FETO,” Alyssa says. “We knew we’d regret it if we didn’t.”

In September 2020 – during the height of the COVID-19 pandemic – Alyssa and Louis moved into the Ronald McDonald House in Philadelphia. Alyssa was a little over six months pregnant and took a leave of absence from work. Louis was able to work remotely to remain with his wife. At every step, CHOP provided the couple with support services to help them prepare for and cope with the uncertainty of their son’s health.

FETO involves two minimally invasive surgeries before birth, performed by a multidisciplinary team. During the first surgery, a small incision was made on Alyssa’s abdomen, and an endoscope was inserted through her abdominal wall and uterus under ultrasound guidance. Then, using ultrasound guidance and direct visualization inside the uterus, a tiny balloon was placed in the unborn baby’s airway – effectively blocking it. This would allow the lungs to fill with fluid and signal them to grow.

After the procedure, Alyssa remained on bedrest, only leaving to go to CHOP for follow-up appointments. A week later, the couple learned good news: the procedure was working; the baby’s lungs were growing. 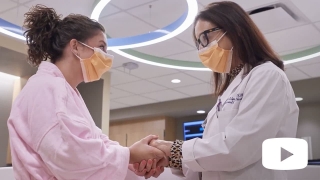 The plan was to perform a second procedure a few weeks later to remove the balloon from the baby’s airway before birth in the hospital’s Garbose Family Special Delivery Unit (SDU). The SDU is the world’s first birth facility in a pediatric hospital specifically designed for mothers carrying babies with a known birth defect. The SDU’s dedicated team is prepared to provide specialized care during and immediately after birth.

On Oct. 10, 2020, at 33-weeks’ gestation, Alyssa’s water broke. The couple immediately went to the hospital where the team determined the baby’s heart rate was dropping. They needed to remove the balloon from his airway so the airway was no longer blocked. The team swiftly mobilized for an emergency cesarean delivery during which the balloon would be removed before Hendrix was completely delivered.

After the balloon was removed and the umbilical cord was cut, baby Hendrix was stabilized by the waiting Newborn/Infant Stabilization Team. The team placed a tube in his airway to help with breathing; a tube down his nose and into his stomach to keep it clear of fluid and air; and IV lines to deliver medications and fluids.

Hendrix’s doctors were initially concerned he would need extracorporeal membrane oxygenation (ECMO), a treatment that allows the lungs and heart to rest while a machine takes over their function. But they ultimately determined that level of support was not needed. FETO had expanded Hendrix’s lung volume nearly 50%. He was small, but he was a fighter.

“He had a rocky start, to be sure, but he persevered,” Alyssa says.

Hendrix was admitted to CHOP’s Harriet and Ronald Lassen Newborn/Infant Intensive Care Unit (N/IICU) and was there for more than a month before he was stable and strong enough for surgery. The surgical team moved his abdominal organs into proper position and created a synthetic diaphragm to support his breathing.

Hendrix remained in the N/IICU for two more months, then transferred to the infant transitional care unit (ITCU). He was still receiving supplemental oxygen and nutrition through a feeding tube, and the team taught Alyssa and Louis how to care for Hendrix in preparation for his discharge. In February 2021, they were finally able to take Hendrix home.

Enjoying life with up to 85% normal lung function 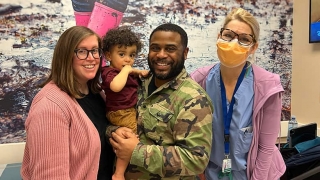 Alyssa, Hendrix and Louis with Dr. Hedrick. Over the past year, Hendrix has grown by leaps and bounds. At his 15-month visit to the Pulmonary Hypoplasia Program, his lung capacity had increased to 85% of normal lung function. He now has the lung capacity to do most things his peers are doing.

“Considering where he started from, Hendrix is a complete miracle,” Alyssa says. “I almost can’t believe how well he’s doing.” Now 18 months old, Hendrix is an observant and curious little boy, who loves to explore and bang his drumsticks on anything and everything. And the best part: He no longer needs supplemental oxygen.

“So many people helped us get here: the nurses in the NICU, who are the heart and soul of CHOP; Dr. Moldenhauer, who explained Hendrix’s condition in ways we could understand; and Dr. Hedrick, our hero, our surgeon and our biggest cheerleader,” Alyssa says. “We can’t thank them enough.” 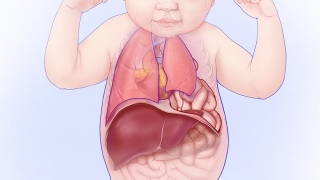 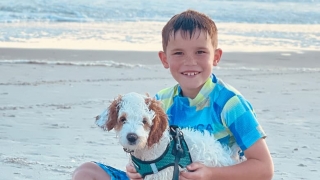 The Best Chance to Thrive

Chris and Jolin traveled from their home in Pensacola, Florida to Children’s Hospital of Philadelphia to give their son, Max, access to world-class CDH care.