Wesley is a happy little boy who loves to play with his preschool friends and zoom his toy cars around. Watching him smile and laugh today, it’s hard to believe that he required lifesaving surgery as an infant.

Wesley’s parents, Kylee and Joel, first learned of their son’s medical problems not long before he was born. At a routine 30-week ultrasound, the technician told them their baby had a hernia and suggested they make an appointment with a specialist. The technician didn’t seem alarmed, so the parents weren’t terribly worried. They booked the next available appointment, which was three weeks out.

But at the appointment, Kylee and Joel found out that the condition was quite serious. The doctor did his own examination and explained that their unborn child had congenital diaphragmatic hernia (CDH). CDH occurs when a hole in the diaphragm muscle fails to close during development. Wesley’s stomach, spleen and intestines had migrated through this hole and up into his chest, displacing and interfering with the growth of his developing heart and lungs.

“He told us the baby probably wouldn’t live,” Kylee recalls. “It was a doom and gloom assessment.” But he did give the parents one piece of advice that offered a ray of hope. He told Kylee, “If you were my daughter, I’d want you to go to Children’s Hospital of Philadelphia.”

From Buffalo to Philadelphia

They immediately started planning to make the trip from their home near Buffalo, N.Y., and two days later they were in Philadelphia for an appointment with N. Scott Adzick, MD, Surgeon-in-Chief at Children's Hospital of Philadelphia (CHOP) and the founder and director of the Richard D. Wood Jr. Center for Fetal Diagnosis & Treatment.

After a thorough evaluation that included a full day of advanced fetal imaging tests, the team at CHOP confirmed the diagnosis of CDH and discussed their recommendation for treatment. Because the health of a baby born with CDH can change unexpectedly, delivery at a hospital with immediate expert care available is critical. The team advised Kylee to stay in Philadelphia for the final weeks of her pregnancy so that she could deliver at the Garbose Family Special Delivery Unit (SDU), which is designed to provide immediate medical care for babies born with serious and life-threatening birth defects.

After the baby was born and stable, the plan was for Dr. Adzick to operate and close the hole in his diaphragm. The medical team explained that even with immediate intensive care and early surgery, Wesley’s condition put him at risk. Based on the size of his lungs, they estimated his chance of survival at 70 percent.

Stunned to be getting such a frightening assessment so close to their due date, the couple decided that their baby’s best hope lay in the treatment plan CHOP was offering. So, they made a quick trip home to pick up their 2-year-old daughter, Charlotte, and moved themselves to Philadelphia for an extended stay.

Attention to the tiniest details

Five weeks later, Wesley was born in the SDU, where he was immediately put on a ventilator and moved to the Harriet and Ronald Lassen Newborn/Infant Intensive Care Unit (N/IICU). CHOP’s unique Neonatal Surgical Team oversaw Wesley’s care in the days following his birth. The multidisciplinary team is specially trained to care for the tiniest surgical patients and has extensive experience dealing with complex birth defects like CDH.

Wesley did well on the ventilator at first, but on day five he took a turn for the worse. To keep him alive, he was put on extracorporeal membrane oxygenation (ECMO), a heart-lung bypass system that provides breathing and heart support. That stabilized his condition enough that after two weeks, Dr. Adzick could perform the surgery to close the hole in his diaphragm.

For babies born with CDH, the smallest detail can impact their outcome. Because they are often extremely sensitive to noise and movement, surgical repair of CDH is often performed right at the bedside in the N/IICU so babies don’t need to be transported to the operating room.

In Wesley’s case, the surgery was a staged procedure. A portion of the abdominal wall was used to close the hole in his diaphragm and separate his digestive organs from his heart and lungs. Because his abdominal cavity wasn’t large enough to hold his misplaced organs, his stomach and intestines were placed in a silo (a sterile bag) that was elevated above his stomach. Over the course of several days, through the force of gravity, his organs gradually lowered into his expanding abdomen. A second procedure was done to remove the silo and close the abdominal wall.

Earning his first piece of cake

Wesley still had a few more hurdles to clear. The next was to take him off ECMO and let his heart and lungs work for themselves, which he handled nicely. Then he needed to start eating, a milestone that proved to be more difficult to reach. He was released from the N/IICU after 106 days with a nasogastric (NG) tube — a tube that runs through the nose and down into the stomach — for feeding, and relied on that for nutrition until he was almost a year old.

Even with the NG tube, Wesley experienced severe gastroesophageal reflux and feeding intolerance. Despite reflux medications and trying a variety of formulas to use as fortifiers to promote adequate growth, the problems persisted. Follow-up studies demonstrated that Wes’s intestines were not positioned normally. This is a condition called malrotation.

As soon as he recovered from the surgery, Wesley began eating. “It was an amazing experience to watch him eat for the first time,” says Kylee. He had his first birthday during his recovery at CHOP, and enjoyed a piece of birthday cake. 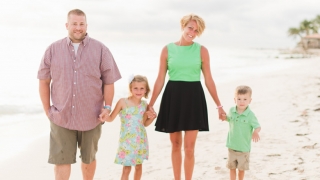 Now 3 years old, Wesley receives ongoing care through the Pulmonary Hypoplasia Program, a multidisciplinary follow-up program for children with CDH. His care is coordinated by a medical team that includes a cardiologist, a pulmonologist, a dietician, a general surgeon, and the Neonatal Follow-up team, who work together to improve his health and monitor for any issues that arise as he grows. He returns to CHOP every three months for appointments with his cardiologist.

One health challenge related to his CDH that Wesley has had to deal with is pulmonary hypertension (PH), or high blood pressure in the arteries of the lungs. He takes it in stride.

“Wesley is a trooper,” says his mom. A pump feeds a regular dose of medication into his bloodstream to manage his PH, and he returns to CHOP every three months for appointments with his cardiologist to monitor for any changes.

During visits, the family makes a point of stopping at the N/IICU to see the nurses who took such good care of them during Wesley’s first three months of life. They are always delighted to see the healthy, happy little boy he has become.

“Every step has been remarkable,” says Kylee. “I have nothing but good things to say about CHOP. Even down to the people who clean the rooms, they are all so kind and so knowledgeable.” 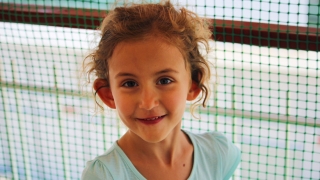 After learning their baby had CDH, the Pappas family traveled from Tennessee to seek expert care in Philadelphia.