Carter, 7, loves to play basketball. He’s happiest with a ball in his hands or playing outside with friends. He also plays quarterback in football. Thanks to a nutrition breakthrough at Children’s Hospital, he has a lot of energy — so much that his parents feel that he never stops moving.

Carter was diagnosed with Crohn’s disease at age 5. A year later, Carter’s energy and health was restored. Thanks to treatment at Children’s Hospital of Philadelphia (CHOP), he’s growing again and back playing his favorite game: basketball.

That wasn’t always the case. As Carter turned 5, his parents noticed that he was tired all the time and no longer wanted to play outside with friends. His eyes were sunken and he wasn’t gaining weight. After a few weeks, he also started to complain of stomachaches.

The next step in Carter’s medical journey was a referral to Julie Stern, MD, a specialist in hematology and oncology with CHOP. In visits at the King of Prussia facility, she treated Carter with intravenous iron supplements and did additional tests to understand what was causing his health problems.

Based on what Dr. Stern found, she referred Carter to CHOP’s Division of Gastroenterology, Hepatology and Nutrition (GI). There, he was examined by gastroenterologists Andrew Grossman, MD, and Máire Conrad, MD. Dr. Grossman is co-director of CHOP's Center for Pediatric Inflammatory Bowel Disease. The problem appeared to be a form of inflammatory bowel disease (IBD), and the doctors discussed the possibilities with Carter’s parents. One of the possibilities they described was Crohn’s disease, a chronic form of IBD that has no known cure and more typically appears in adolescence or young adulthood.

The GI medical team put Carter through an extensive set of tests: a video endoscopy using a swallowed camera capsule, barium x-rays, as well as upper endoscopy and colonoscopy with biopsies (tissue samples) of his intestines.

Crohn’s turned out to be Carter’s diagnosis. “That was a scary experience — to find out your child has a disease with no cure. They had told us about Crohn’s disease in an earlier meeting, but it was just one of many possibilities then. Now it was real,” remembers Heather, Carter’s mom.

While the news was scary, it also came with hopeful information. Medication and careful attention to diet could reduce the inflammation. Carter was prescribed an anti-inflammatory medication, and the family was given guidance regarding which foods would help or potentially hurt Carter.

Heather led the family in adopting a healthier diet. They all changed what they ate so that Carter didn’t get the idea that he was on a special or restricted diet. The changes turned out to be in line with what nutritionists recommend for everyone: fresh, natural foods with no additives or preservatives. The family eliminated packaged foods from their diet and started making meals from scratch.

“Our older son, Jackson, was the easiest one to get on board,” says Heather. “I encouraged Carter and Jackson to participate in planning what we ate, in shopping and cooking.” Home-cooked meals are now just a normal part of the family’s life.

Dr. Conrad let the family know that it was okay for Carter to eat an occasional treat at a friend’s house (so he can go to a birthday party and have a piece of cake like a normal kid). And if he’s offered a packaged snack bar by a friend’s parents, he doesn’t have to say “no.”

To help Carter understand which foods are good for him and which aren’t, the family has adopted easy-to-remember terms: “green-light foods” are fine; “red-light foods” will cause problems. Carter will say, “When I eat this, my belly feels bad.” Or, “I’m going to stay on track and eat green-light foods.”

Carter returns to CHOP every three months for follow-up appointments. These include blood tests to check inflammatory markers as well as hemoglobin levels. 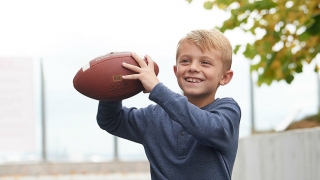 The dietary changes and treatment with oral anti-inflammatory medication have made a huge difference. It took a few months for Carter to get back to a heathy baseline – he was weakened by the months of undernourishment. But six months after the treatments began, he looked and felt like himself again and gained five pounds.

Carter’s now back to playing with his friends whenever he gets the chance, and that includes playing his favorite sport: basketball. In the fall, just nine months after his diagnosis with Crohn’s disease, he started playing football.

Heather appreciates the care and expertise of Carter’s medical team. She attends the annual IBD Education Day, where CHOP doctors and researchers give updates on advancements in IBD treatment and answer questions. Carter and his family are active in raising money for charities dedicated to raising awareness and funds to help find a cure for IBD. In May, Carter was chosen by the Crohn’s and Colitis Foundation of America to be their Local Honored Hero at the Philadelphia Take Steps for Crohn’s and Colitis walk. Heather was also recently elected to the board of A Mother's Wish Foundation, which is a local organization dedicated to supporting those with IBD.

“I can't say enough good things about chop. everyone we have dealt with there has been understanding and helpful, not just with carter, but with us as parents.”