Before Cameron Kaelin underwent surgery that removed his right big toe and part of his foot to rid him of cancer, he played soccer, surfed and skateboarded. 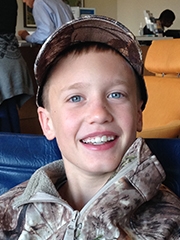 Close to three years after that surgery, guess what? Cameron has played soccer, surfed and is focusing on skateboarding.

“I’d say skateboarding is my favorite sport right now,” says Cameron, 12. “I like doing tricks on the quarter pipe.”

Clearly, missing a large section of his foot has not slowed him down. He’s as active as he was back in spring 2014 when he first felt some pain in his foot after playing soccer. An X-ray in July “was perfect,” his dad, Ross, says. Cameron played throughout the summer and fall, but the pain got worse, and after an October tournament, his foot was swollen. This time an X-ray and MRI showed a mass in his first metatarsal and surrounding soft tissue. An orthopaedic surgeon near their Salisbury, MD, home suspected a sarcoma: a malignant tumor.

The local doctor referred the family to Kristy Weber, MD, an orthopaedic surgeon who co-leads the Bone and Soft Tissue Tumor Program at Children’s Hospital of Philadelphia (CHOP). “He knew her and called her on her cell,” says Ross. “Things happened quickly after that.”

Within days, Cameron underwent an ultrasound-guided needle biopsy that revealed a Ewing sarcoma, a type of cancer so rare that only 250 cases are diagnosed in the United States each year. The good news: A chest CT scan and a body PET-CT revealed only the localized Ewing sarcoma and no metastatic (spread) disease.

The Bone and Soft Tissue Tumor Program, a collaboration among Orthopaedics, Radiology, Pathology and the Cancer Center, was created to treat children like Cameron. Naomi Balamuth, MD, became his oncologist and oversaw his chemotherapy treatment. Cameron would have six rounds of chemo before his surgery, to shrink the tumor, and eight rounds after it, to kill off any lurking cancer cells.

“It was obvious to us that Dr. Balamuth and Dr. Weber were in sync on Cameron’s care,” says Ross. “If we had an appointment with one, the other would make room in her schedule for us that same day. The way they communicated was unbelievable.”

While in 90 percent of Ewing sarcoma cases the limb can be salvaged or reconstructed, Cameron was among the 10 percent where that wasn’t possible.

“The bone where the tumor was located was pretty much destroyed,” says Julie Kaelin, his mother. “There was no way to save the metatarsal, the longer bone attached to the toe bone (phalange), and consequently, his big toe.” 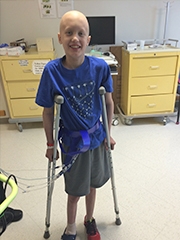 The main concern was to remove all the cancer. “Before the surgery, we told Dr. Weber to take as much of his foot as she needed to get rid of the sarcoma,” says Ross. “She was adamant: ‘I’ll do what needs to be done.’ She nailed it. She got the cancer out and left enough of his foot for him to function.”

After his post-surgery chemo, he started rehabilitation. After 13 months on crutches, he was happy to finally set them aside — a week before his Make A Wish trip to Hawaii.

“Our concern was that his balance would be off,” says Ross, “but he didn’t really have balance issues. He struggled at first to get his normal gait back, but he walks absolutely normally now.”

Cameron tried a couple of different orthotics, but none of the shoe inserts worked for him. His foot felt better with just a sock and shoe.

“Dr. Weber told us that kids are very resilient and adapt better than adults do,” says Julie. “She was right. Unless you saw him without shoes, you’d never know he’s missing a toe.”

“CHOP has spoiled us on healthcare because we’ve seen it done right,” says Ross. “If you have a test in the morning, they give you the results that day before you leave, or call you as soon as they have them. They explain everything so well. We had no questions on the course of treatment, what would go on, what would be next. Before we even thought of something, they had already taken care of it. We know CHOP is where he was supposed to be.”

“Cameron has been cancer-free for 2 ½ years, and we’re so grateful for Dr. Weber, Dr. Balamuth and everyone at CHOP for helping him beat cancer. We’re CHOP’s biggest cheerleaders,” says Julie.