It was early on a Thursday morning, and everyone in the room was focused on the beat of Tucker Roussin’s tiny heart. 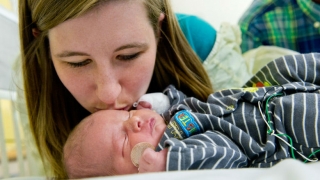 The multidisciplinary team of clinicians from The Children’s Hospital of Philadelphia was hard at work. As pediatric cardiologist Jack Rychik, MD, monitored Tucker’s heartbeat, the surgical team, led by Holly Hedrick, MD, and guided by ultrasound images interpreted in real time by Mark Johnson, MD, Director of Obstetrical Services, worked quickly and efficiently, every decision informed by decades of experience, every step one they had completed hundreds of times before.

It was their knowledge and expertise that made what happened next possible: Cardiothoracic surgeon J. William Gaynor, MD, removed a massive tumor from Tucker’s walnut-sized heart — and Hedrick returned the unborn baby to his mother’s womb.

Tucker had been diagnosed with a fetal pericardial teratoma, an extremely rare tumor that grows on the lining surrounding the heart, when his mother, Katie, was 20 weeks pregnant. A series of fetal echocardiograms performed by clinicians with CHOP’s Fetal Heart Program, who have special expertise diagnosing cardiac conditions before birth, revealed that the tumor was almost as large as Tucker’s heart — and it was growing quickly.

The Fetal Heart team, led by Rychik, met with Hedrick and other clinicians from the Center for Fetal Diagnosis and Treatment to go over the options available to Katie and Tucker. After much discussion, they recommended open fetal surgery to remove the tumor.

The procedure had never been used successfully to treat this condition, but the team knew that without it, Tucker would likely die within the week.

They also knew that if any medical team could save Tucker’s life, it was theirs.

Removing a tumor from a baby’s heart in utero: Few medical teams have the skill and resources to even attempt such a complex procedure, which presents significant risks for both mother and baby.

A Breakthrough for Fetal Hearts 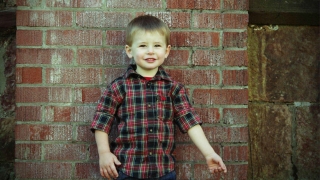 But CHOP’s fetal surgeons, who have performed more than 1,350 in utero surgeries, know better than anyone how to minimize those risks; their work has helped make complex prenatal surgery an option for a growing number of babies with birth defects. And the experts treating Katie and Tucker knew that the team they had assembled, which included fetal surgeons, cardiologists, maternal-fetal medicine specialists and cardiothoracic surgeons, was more comprehensive than any other in the world.

It was that knowledge, says Rychik, that made all the difference: “It was the ability to bring so many different disciplines to the table that made us confident enough to take the leap to try to do this.”

On May 9, 2013, fourteen weeks after his surgery, Tucker was delivered via c-section in CHOP’s Garbose Family Special Delivery Unit. Just two weeks later, he was on his way home to Vermont with his mom, dad and big brother Gavyn.

Tucker is now 2 1/2 years old and growing like a weed, according to Katie. A happy, healthy child, he has no signs of cardiovascular problems. His heart, says Rychik, “is indistinguishable from a normal heart.” And his future, Hedrick says, "looks incredibly bright."

“We expect that Tucker should be able to lead a full life,” she says. “But there’s so much we still don’t know. He’s the first baby to survive in utero surgery for this condition, so we’ll be following him closely as he grows up. What we learn will inform our ongoing efforts to develop new treatments for children with all types of birth defects, both common and rare. We’ve learned so much from Tucker — and he still has much to teach us.”

The pioneering surgery that saved Tucker’s life was one of many incredible breakthroughs made at CHOP, where awe-inspiring procedures like in utero surgery take place every day — and physicians are encouraged to do the kind of work that leads to lasting, transformative changes in the field.

That means constantly asking new questions — and taking their work in challenging new directions. Says Gaynor: “If you stick to just trying the things you’re 100 percent sure will be successful, you’re likely never going to hit a home run.”