Madelyn was a happy and healthy newborn, so when her mom Jennifer heard her crying in the middle of the night, she assumed the baby just needed to be soothed back to sleep. Instead, she found her 5½ month old daughter covered “from head to toe” in a rash. 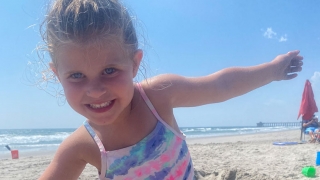 She became frantic. “I remember ripping off her pajamas and putting her in the bathtub,” hoping whatever was causing the reaction would wash off,” recalls Jennifer.

At the same time, she began racking her brain thinking about any recent changes in their routine – especially her own diet, which was already gluten and dairy free, since Madelyn was exclusively breastfed.

Jennifer and her husband, Josh, called their pediatrician’s office at CHOP Primary Care, Flourtown. The on-call pediatrician encouraged them to take Madelyn to CHOP Urgent Care, King of Prussia, where they were seen quickly and left with a prescription for hydrocortisone cream. The cream seemed to help with Madelyn’s rash, but doctors at Urgent Care encouraged the family to follow up with an allergy specialist. 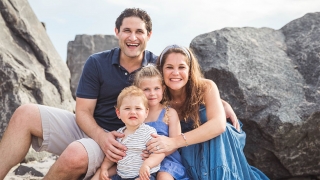 Parents Jennifer and Josh enjoying time on the beach with their children, Madelyn, 3, and Jake, 18 months. The couple made an appointment with Antonella Cianferoni, MD, PhD, an attending physician with the Division of Allergy and Immunology and the Food Allergy Center, who works primarily at CHOP Specialty Care, King of Prussia.

Dr. Cianferoni conducted a series of skin and blood tests on Madelyn before diagnosed the baby with IgE-mediated food allergies to dairy, sesame and all nuts.

Jennifer could have cried. “I had been eating Kind bars, having nuts around her all the time,” she says. “It was on me when she was nursing.”

Determined to continue breastfeeding Madelyn, Jennifer decided to remove all of Madelyn’s symptomatic foods from her diet, replacing her usual protein bars, hummus and veggies, and peanut butter on rice cakes, with a regimented selection of proteins including grilled chicken and salmon.

Within 10 days, Madelyn’s skin rash had mostly cleared. The next few months consisted of mostly maintenance. While Madelyn continued to breastfeed, Jennifer also began to introduce safe solid foods into her diet, including sweet potatoes and ground chicken, turkey, beef and salmon.

Mealtimes were uneventful until Madelyn was about 6½ months old and had a reaction to a mushroom – adding it to her list of restricted foods. Jennifer gave Madelyn some over-the-counter Benadryl and monitored her to ensure a more serious reaction did not occur.

A candidate for oral immunotherapy

When Madelyn returned for her one-year follow-up appointment with Dr. Cianferoni, Jennifer learned her 18-month-old daughter was a good candidate for oral immunotherapy (OIT).

OIT is a treatment for children with severe food allergies. It helps to slowly desensitize children to the food or foods they are allergic to by giving them miniscule amounts of their allergen – under medical supervision – and slowing building their tolerance to the food. The goal is to reach a “maintenance” dosage of their allergen – i.e., an ounce of scrambled eggs, 1 peanut M&M, etc. – and continue ingesting it daily. In many cases, daily ingestion of the allergen helps decrease the child’s sensitivity to the food, reduce the risk of accidental exposures and the likelihood of a severe allergic reaction.

Each child’s OIT plan is customized to the patient’s and family’s goals. Because Madelyn was so young, her clinical team recommended starting OIT at CHOP with a single food: Scrambled eggbeaters.

Madelyn came to CHOP’s Main Hospital in Philadelphia for initial dosing (ingesting a small quantity of scrambled eggs) and increased dosing (known as “updosing”) under medical supervision. Maintenance dosing between visits was completed at home under her parents’ supervision.

By the time Madelyn was 3 years old  she could safely eat eggs without an allergic reaction. Jennifer says she includes both baked and scrambled eggs in her daughter’s diet at least three times a week to keep her tolerance up.

As Madelyn has grown, her food allergies have changed. She can now safely eat products with baked milk, hazelnuts and almonds. Cow’s milk, sesame and peanuts are still off-limits for now, but Jennifer reports Madelyn will begin OIT for sesame and peanut this fall – with hope of further expanding her growing daughter’s food options.

The success of OIT is exciting and restoring Madelyn to a normal diet that includes cow’s milk is definitely a family goal, says Jennifer. She recalled an incident when Madelyn’s younger  brother Jake kissed her after he drank milk. “Her face turned red in seconds,” Jennifer recalls.

Now 3 years old, Madelyn’s food limitations don’t seem to bother her, but she does realize she can’t eat everything. The family always keeps an EpiPen at the ready, just to be safe.

“She is really smart,” Jennifer says. “She’ll ask me, ‘Mom, did you look at the ingredients?’ She knows her ice cream is different from the ice cream that her dad and Jake eat.”

This past summer, during vacation at the Jersey shore, Madelyn ate out at a restaurant for the first time. She loved every bite of her bowl of pasta, Jennifer says.

Looking back, Jennifer says her family is fortunate to have Dr. Cianferoni on their side. “We loved her when we first met her and we love her now,” she says. 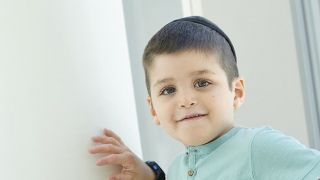 Learn the fundamental of OIT at CHOP, what to expect during treatment, and how the therapy could benefit your child.