When Kate Distasio was 12 weeks pregnant with her son Vincenzo (Vin), she learned that he had gastroschisis, a type of abdominal wall defect in which portions of the intestine protrude outside the body through a hole in the abdomen. Now almost 10, he's a big kid with a big personality. After starting life in the N/IICU, he's the tallest person in his class! 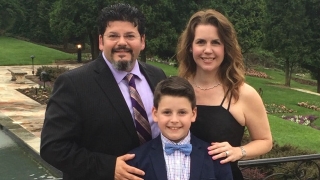 The Distasio family “We were terrified at first,” recalls Kate. Her doctors said she should consider terminating the pregnancy, but Kate and her husband Donald decided to get a second opinion at the Center for Fetal Diagnosis and Treatment at The Children’s Hospital of Philadelphia.

The Distasios traveled from their home in West Orange, NJ, to CHOP for a full-day evaluation. Kate underwent a series of imaging tests, including a high resolution ultrasound, ultrafast fetal MRI and fetal echocardiogram to confirm the diagnosis.

At the end of the day, the Center’s multidisciplinary team, including a maternal-fetal medicine specialist, pediatric surgeon and coordinator sat down with the Distasios to explain the condition and discuss treatment options available for their baby.

The most experience for the best outcomes

Approximately 50 to 60 patients with abdominal wall defects such as gastroschisis are referred to the Center each year. For the Distasios, learning that the team at CHOP was so familiar with the condition, while other doctors they talked to hadn’t even heard of it, was extremely important.

“To us, that experience meant the best possible outcomes," Kate says. "They put our minds at ease and told us that our son’s gastroschisis was fixable, but there was a chance for possible complications and that we would need a lot of monitoring.”

The Distasios toured the Newborn/Infant Intensive Care Unit (N/IICU) and the Garbose Family Special Delivery Unit (SDU), which was especially important to Kate. The Distasios knew they had found the right place.

“Aside from being one of the best hospitals in the world, they were the only one that let me deliver in the same hospital where they would be taking care of my baby.” 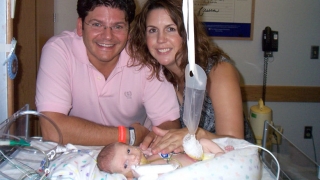 Vincenzo with his parents in the N/IICU during gastroschisis repair After 32 weeks gestation, Kate began coming to CHOP twice a week for monitoring so that the team could keep a closer eye on Vin’s condition. “It was a little daunting, but the whole team was very comforting, accommodating and reassuring,” she recalls.

During an appointment at 35 weeks, the team told the Distasios that Vin was in distress and it was time to deliver.

Vincenzo Michael Distasio was born on June 24, 2008, in the SDU. He was five weeks early, weighing 5 pounds, 5 ounces.

The team stabilized Vin and brought him straight to the N/IICU. His exposed bowels were placed in a silastic (silicone and plastic) silo that was suspended above his bed. This protected the bowel while gravity and daily reductions slowly and gently pushed the bowel back into his tiny body, allowing time for the abdomen to grow so there would be room to place all the organs back inside when it was time for surgery.

Eight days later, pediatric surgeon Holly Hedrick, MD, performed a closure surgery to place the rest of Vin’s intestines back into his body and close the opening. Ten days after Vin was born, his parents were able to hold him for the first time.

Vin faced several obstacles during recovery, including severe gastroesophogeal reflux and a hiatal hernia that required another surgery (a Nissen fundoplication) when he was 7 weeks old.

After two months in the Hospital, Vin was able to go home, where he did well. He wasn’t gaining weight as fast as his doctors wanted him to, so his parents supplemented his nutrition through a feeding tube for a few months to help with nutrition and growth. After that, he never looked back.

When Vin was about 3 years old, he started asking questions like, “Why don’t I have a belly button?” So Kate decided to make a story book for him to help explain everything. As he was growing up, when kids asked him the same question, he was very matter of fact: “Because I had gastroschisis.” 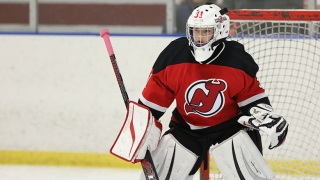 Vincenzo playing ice hockey Today, Vin is an active, easy-going kid with a big personality and a great sense of humor who makes friends everywhere he goes. The almost-10-year-old also happens to be the tallest person in his class — something his parents never imagined possible in those early days in the N/IICU when he struggled to gain weight.

"He has grown so much and is so active that it's hard to believe there was ever anything wrong," his mom says. "We laugh now thinking back to when we had to use a feeding tube! Now he eats foods that many adults won't eat. He loves sushi, filet mignon and burrata."

Vin loves sports, and plays many, but his favorite is hockey (he's starting goalie for his team).

"If he knocks someone over or someone is injured, Vin is the first one to put his hand out to help them up," says Kate. "He is such a great kid, and CHOP was integral in giving us a healthy boy. Except for a few scars on his belly, you would never know he ever had any health issues."

“We just love CHOP, everything about it,” continues Kate. “Telling our story is a way for us to support the Hospital and get the word out there about gastroschisis and the possibilities for birth defects — you can have good outcomes.”

See what Vin and his parents have to say about their journey.