Caitlin McAllister was 2 years old when her parents first realized that something wasn’t right. 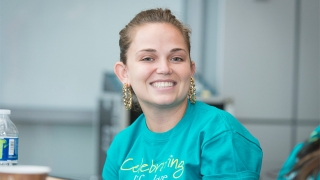 Worried she might have the flu, they were shocked when they learned what was really wrong with their toddler: Caitlin was in kidney failure.

Doctors at The Children’s Hospital of Philadelphia (CHOP) diagnosed Caitlin with hemolytic uremic syndrome (HUS). HUS typically develops as the result of an infection caused by a form of E. coli, bacteria that can contaminate food or water.

She was put on dialysis, a process that replaces the work of the kidneys, to get her kidney function back to normal. But that was just a temporary solution.

“My doctors told my parents that they would need to monitor me closely,” says Caitlin. “Eventually, the HUS would lead to complete kidney failure and I would need a transplant.”

Finding a donor close to home

That day came four years later when Caitlin was 6 years old. Her kidney function began to deteriorate, as doctors had predicted. Long before, her family members had been evaluated to see who would be a match for organ donation. Patients who require a kidney transplant have the option to receive the organ from a live donor, because people can live a normal life with just one of their two kidneys.

“I’m really lucky because I have a few family members who are a match for me,” says Caitlin. The medical team and family decided her father would be the first to donate. The transplant occurred in November 1994, and both Caitlin and her father recovered well.

Caitlin was one of the first patients to be transplanted by the Kidney Transplant and Dialysis Program at CHOP, which was formally established in 1993. Since then, the multidisciplinary team has performed more than 300 kidney transplants, with outcomes among the best in the nation.

“No one was sure at that time how long the kidney would last,” she says. “I followed up at CHOP regularly and took good care of myself, with a lot of support from my family and friends.”

When she was 20 years old, Caitlin made the transition from CHOP to the Hospital of the University of Pennsylvania (HUP).

“It was hard to leave CHOP because I’ve always loved it there, but it was time to take complete responsibility for my medical care," Caitlin said. "Social workers at CHOP helped me prepare to make the change.”

Seventeen years after her first transplant, and now a patient at HUP, Caitlin’s creatinine levels began creeping up again — a sign that her kidneys weren’t doing their job.

Another transplant would be necessary, and this time it was her mom’s turn to donate. The surgery was performed on April 28, 2011.

If you ask Caitlin whether the challenges of her illness have shaped her, she says, “I am who I am. It’s impossible to know how I would have been different if these things hadn’t happened to me, since I’ve been a transplant patient for as long as I can remember.”

But it’s impossible not to see how positive and how driven she is, and how understanding she is of others’ challenges. Mature far beyond her years, the 24-year-old has certainly stepped up to meet the challenges of a life that sometimes seems to revolve around her health.

Caitlin has never let her illness stop her. She’ll graduate in 2013 with a bachelor of science in nursing from Jefferson School of Nursing, and plans to go into pediatrics.

Caitlin already has a lot of experience working with sick children from her part-time job at CHOP. She works as a sitter, spending one-on-one time with patients who need a little extra supervision.

“A lot of important things have happened to me at CHOP, and that helps me understand what these kids are thinking and feeling," she says. "I can tell them that I’ve been there, that I was scared once too, and that I came through it all.”

“I think you learn something from everything that happens in your life. Whether they’re good experiences or bad, there is something you can take away from them. People who’ve had hard lives, they’re always the ones who end up being the strongest.”

Today, Caitlin is in good health, and looking forward to starting her career in nursing. She doesn’t know whether she’ll need another kidney transplant one day and neither do her doctors. But if Caitlin ever needs another gift of life, her sister has promised to be next in line.