Louie began suffering from a form of mitochondrial disease when he was 11. Now 18, he builds his strength, physically and mentally, with cross-fit training. Through exercise, his coordination has improved and some of the symptoms of his disease have been reduced.

One morning when Louie was 11, his mother, Rosa, noticed a problem with his eyes. “I couldn’t tell whether he was looking at me or not,” Rosa remembers. His eyes had gone out of alignment. Five days later, he woke up with a headache.

During an examination, Louie’s pediatrician noticed his face looked droopy, and his smile wasn’t symmetrical. Not only were his eyes not coordinating, one pupil was larger than the other. He recommended that Rosa bring Louie to the emergency room at Children’s Hospital of Philadelphia (CHOP). He was worried it might be a brain infection.

The search for a diagnosis

Louie was admitted to CHOP and stayed for five days, undergoing a number of tests. The medical team was able to rule out a lot of possibilities — he didn’t have a brain infection — but tests were inconclusive and did not produce a definitive diagnosis.

Louie went home and back to school. A few days later, his teacher called Rosa to report that Louie’s left eyelid was drooping to the point that his eye was almost shut. After a call to the pediatrician, they brought him back to the emergency room at CHOP.

Louie was admitted for additional monitoring and tests. He developed a tremor and weakness on one side of his body, and brainstem changes on his brain MRI. In search of a diagnosis, doctors at CHOP expanded his medical team to include two neurologists, Sabrina Yum, MD, and Gihan Tennekoon, MBBS, an ophthalmologist, Graham Quinn, MD, and a neuro-ophthalmologist, Grant Liu, MD.

Test were done for tick-borne illnesses, mineral deficiencies, and neuromuscular conditions such as myasthenia gravis. Results all came back negative. 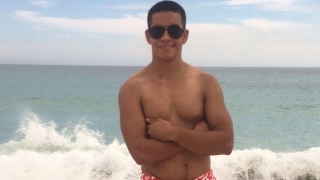 One possibility considered by his medical team was mitochondrial disease, a condition in which mitochondria — the energy-producing elements in cells — don’t function correctly. The disease can cause a wide range of health problems.

Over the years, Louie’s medical team at CHOP has grown to include Brenda Banwell, MD, Chief of the Division of Neurology. When he began to have central sleep apnea, which led to problems staying awake during the day, pulmonologist Jeffrey Ewig, MD, prescribed BiPAP therapy to maintain regular breathing at night. Louie has also had a series of eye surgeries with Dr. Quinn and James Katowitz, MD, which have largely corrected his droopy eyelids. He still has double vision but has learned to cope with it by focusing on just one of the images he sees.

“The eye surgery helped a lot,” says Rosa. “His eyelids are almost back to normal.”

He is also followed in Mitochondrial Medicine, a frontier program at CHOP, by Marni Falk, MD. The team works to optimize his overall health, oversees mitochondrial supplement therapies, and monitors for progressive problems in different body organs that may develop over time in patients who have a deficiency of their overall amount of mitochondrial DNA, which is needed to generate the respiratory chain that makes energy within mitochondria.

Common problems may include mood or cognitive problems, hormone deficiencies, chronic fatigue, exercise intolerance, and a wide range of neurologic problems affecting his brain, nerves, and digestives system. Louie’s multi-disciplinary team also has expanded to include Shana McCormack, MD, MTR, from the Division of Endocrinology and Diabetes, Anirban Banerjee, MD, from CHOP’s Cardiac Center in a dedicated Mitochondrial Disease Cardiac Clinic, as well as CHOP specialists in Exercise Physiology and in Behavioral Health.

Louie found a therapy in early 2016 that has proved helpful for him — cross-fit training. He discovered a local gym in his neighborhood and took to the workouts immediately. The trainers carefully push him to get the most out of his workouts and have modified exercises to meet his needs. He has responded with tremendous dedication. He now goes to the gym four days a week for 90-minute workouts and does the exercises at home on the other days. He lifts weights, climbs ropes, and does strength and balance exercises on rings and parallel bars. 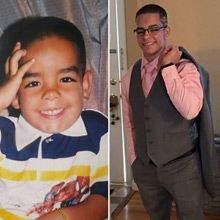 Before he started cross-fit training, he was walking with a sideways gait. Louie still walks with a limp, but his gait is steadier now. He is able to walk or bike the two miles to the gym, stopping if he has spasms or just needs a break. Fortunately, as his strength and coordination have improved, the spasms have become less frequent and less intense.

Louie is in college now, studying mechanical engineering. He does cross-fit when he gets home from his classes. “I have a lot to overcome,” Louie says. “My physical challenges make things more difficult. With the cross-fit training I’ve become stronger as a person, physically and mentally. My attitude is, don’t give up. There’s always an opportunity or a chance waiting behind that door. Just don’t give up.”

Hope for children with mitochondrial disease