After delivering a critically ill baby by cesarean section, Rachel was in pain, physically and emotionally. Her son was too sick to breastfeed, but she knew her milk’s germ-fighting factors would help protect her son’s fragile health. Given her condition, pumping her milk every two hours felt like an enormous obstacle to Rachel, but in the end, it gave her the focus to fight for her child.

“I was overwhelmed with grief from not being able to hold my own baby,” says Rachel. “The last thing I wanted to do after having a cesarean birth was hook up to a (breast pump) machine. But it gave me a mission, it gave me a purpose, it gave me the sense that I was doing something that no one else could do.”

The diagnosis and a decision

Rachel was 20 weeks pregnant with her second child when an ultrasound showed the baby’s diaphragm had failed to close. Called congenital diaphragmatic hernia (CDH), the condition causes the contents of the abdomen (stomach, intestines and/or liver) to migrate into the chest.

A specialist near their home in New Jersey recommended Rachel and her husband, Joseph, terminate the pregnancy or seek care at the Center for Fetal Diagnosis & Treatment at Children’s Hospital of Philadelphia (CHOP).

The couple traveled to CHOP two weeks later. After extensive diagnostic testing, their care team created a plan that included a scheduled c-section within the Hospital’s Garbose Family Special Delivery Unit (SDU), the world’s first birthing center created exclusively for mothers carrying babies with known birth defects. There, Rachel would receive expert maternal care while their baby would have immediate access to the specialized care and eventual surgery he would need.

During her prenatal care, Rachel received a personalized 1:1 consultation with Diane Spatz, PhD, RN-BC, FAAN, nurse researcher and Director of the Breastfeeding and Lactation Program. During this hour-long consult, Rachel and Joseph learned about the importance of human milk for an infant with CDH, and the importance of initiating pumping as soon as possible after delivery. While the baby would not be able to receive milk in his belly until after surgery, they also learned how to perform human milk oral care as soon as Rachel had colostrum available to swab his gums and insides of his cheeks.

Joshua was delivered in August 2012. Rachel got only a glimpse of her son before he was whisked off to the nearby Newborn/Infant Intensive Care Unit (N/IICU). Rachel knew how beneficial human milk is for very sick babies like her son. It strengthens the immune system of infants and is easy to digest.

Despite knowing how important her milk was, it was a rough start. Rachel was emotionally and physically drained. When she did pump, her milk was slow to come in, and she felt discouraged. It was a stark contrast to her experience four years earlier when her newborn daughter instinctively latched onto her breast to nurse.

Fortunately, she had the Hospital’s Breastfeeding and Lactation Program team in her corner. The relationship they began during prenatal care continued after Joshua’s arrival.

“She was as determined as I was to make it work,” Rachel remembers of her time working with Dr. Spatz. With Dr. Spatz’s advice and encouragement, Rachel fell into a routine of pumping every two hours. The frequent pumping ensured a healthy milk supply for her son.

Graduating to the breast 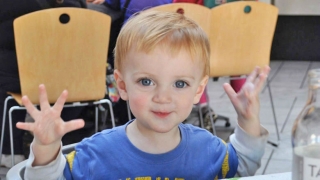 When Joshua was four days old, CHOP Surgeon-in-Chief N. Scott Adzick, MD, MMM, FACS, FAAP, performed the surgery to repair the CDH, guiding Joshua’s organs back into the abdomen and closing the hole in his diaphragm. The surgical repair was a success, and Joshua received his mother’s milk through a feeding tube as he recovered.

Joshua was two weeks old when Rachel breastfed him for the first time. After a few tries, he caught on, but lacked the strength to take in a full meal at the breast. Rachel would weigh Joshua before and after each feeding to determine how much he consumed and would supplement his meals with pumped milk through a nasogastric (NG) tube.

Rachel and Joseph were overjoyed when Joshua was well enough to go home after just 18 days. The couple rented a scale and a breast pump to bring home, where they continued to weigh, nurse and feed Joshua through the NG tube until he was strong enough to take all of his meals from the breast. 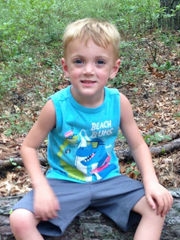 Today, Joshua is an active 5-year-old who loves to swim and ride his bicycle. When Rachel looks back at those first weeks and months with her son, she is amazed by how quickly it went.

At the time, it felt like an eternity that she was pumping milk for her son. Yet, amid the uncertainty, pumping gave her something she could control. And she has no doubt that her milk helped Joshua ward off illness during those critical first two years of his life.

“It’s completely worth it because it gives you something you can do to help your child,” she says. “No one else can do that. I’m a firm believer in the magical qualities of human milk for your babies.” 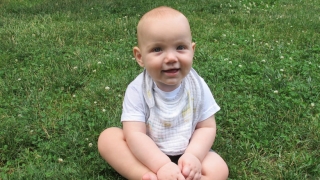 Karen overcame many obstacles to supply her newborn son with human milk that helped him recover from surgery and thrive. 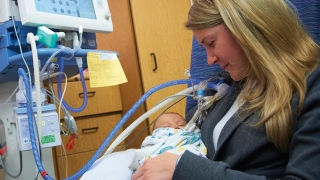 One way you can directly help your baby with special needs is by breastfeeding or pumping your milk. 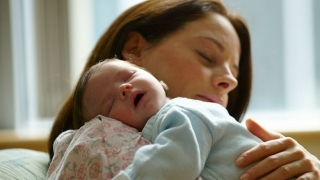 Pumping and Storage of Breast Milk

The lactation team at CHOP helps moms learn how to pump and store their breast milk until it can be fed by tube, breast or bottle to the baby.