Dylan is an energetic and fearless 2-year-old who loves to tackle his older brother. After a year of treatment for rhabdomyosarcoma, he shows no signs of the disease. Today, his family is looking ahead to a bright future. 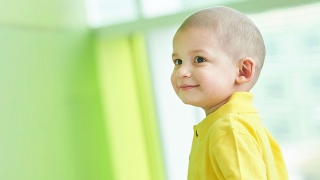 For most of his first year, Dylan was a normal, healthy baby. In January 2016, Dylan’s mom, Nikki, felt a lump near her 10-month-old’s right shoulder blade. At first, the pediatrician thought it might be a muscle knot. But when the lump was still there two weeks later, the doctor recommended that Dylan see a specialist at Children’s Hospital of Philadelphia (CHOP), and referred the family to Michael Nance, MD, Director of CHOP’s Pediatric Trauma Program. Dr. Nance sees patients at CHOP’s Specialty Care & Surgery Center in Bucks County, PA, a location that was convenient for the family.

Over the next two weeks, Dylan underwent a series of imaging tests so clinicians could get a clearer picture of the lump. After the tests, Rochelle Bagatell, MD, a pediatric oncologist with expertise in the care of children with solid tumors, came to talk with Nikki and her husband, Peter. Dr. Bagatell said it was likely the mass in Dylan’s back was a form of cancer. An MRI showed the mass was close to his spine; just how close would be a factor in whether surgery would be an option to remove it.

The following week, Dylan returned for an MIBG scan and a fine-needle biopsy, conducted by Peter Mattei, MD. The results of these tests allowed Dr. Bagatell to make a definitive diagnosis: Dylan had rhabdomyosarcoma, a soft tissue sarcoma that is rare in children.

Dylan’s parents were in shock. In just a couple of weeks, Dylan had gone from being an apparently healthy baby to a child with life-threatening cancer. “It was overwhelming,” remembers Nikki.

The team at CHOP helped reassure the family. “Between our first visit with Dr. Nance and the diagnosis, we were blown away by how accessible everyone was,” Nikki says. “They were just so reassuring and responsive.”

A plan for Dylan

Dr. Bagatell explained to Dylan’s parents that although he appeared to have a less aggressive form of rhabdomyosarcoma, the mass was very close to his spine and surgery may not be able to remove all of the cancerous tissue. Instead, she recommended starting treatment with chemotherapy.

Three days after Dylan’s first birthday, he received his first treatment at CHOP’s Specialty Care and Surgery Center in King of Prussia, under the care of Julie Stern, MD. “It was rough,” says Nikki. “Dylan got very sick. But the nursing staff was wonderful with him. It was amazing how quickly I had confidence in them.”

After three months, Dylan had a series of tests to gauge the effectiveness of the treatment: an MRI, a PET scan and a CT scan, all in one day. The images showed that despite treatment, the mass had grown. It was time to switch gears.

Nikki and Peter met with Dr. Stern and Tracey Jubelirer, MD, another attending physician at CHOP’s Cancer Center, to discuss adjusting Dylan’s treatment plan. The doctors proposed switching to a higher protocol of chemotherapy — a stronger combination of drugs — combined with 28 sessions of proton radiation therapy.

After one dose of the new chemotherapy regimen, which would go on for 52 weeks, Dylan began radiation treatment at the Pediatric Proton Therapy Center. Located in the Perelman Center for Advanced Medicine, the facility is run in collaboration with Penn Medicine.

Before each proton treatment, Nikki held Dylan while the anesthesiologist put him to sleep for the hour-long procedure. Then, she would sit with him afterwards until he was alert enough to go home. The treatment was powerful, and Dylan developed significant burns on his skin and in his throat in the path of the focused radiation beams.

“The nurses were phenomenal,” says Nikki. They helped treat the burns, and went out of their way to make Dylan comfortable. At the time, he was relying on a stuffed animal for comfort — a blue stuffed duck named Quacky. Nikki worried what would happen if they ever lost Quacky, or if Dylan wore the toy down to rags. One of the nurses, without mentioning it to Nikki, contacted the manufacturer, who responded by sending a box of Quacky’s. “That was amazing,” Nikki says. “It was so unexpected. You can see how much they care. You feel like they care about your child individually.”

An important ray of hope came in November 2016. Scans done after the inflammation from the radiation treatment had subsided showed the mass was not active. It was still there, but it was just a clump of dead tissue.

The end of treatment

Even with that good news, the chemotherapy treatment continued as doctors wanted to be certain Dylan’s cancer was eliminated. But treatment was taking its toll on Dylan. The drugs used in the second protocol were more powerful, and the side effects were more intense.

“There were long periods where Dylan didn’t want to play,” remembers Nikki. “He didn’t want me to put him down. I could tell he was feeling very sick.”

After a particularly intense week of chemotherapy, Dylan was sick for weeks. Tests showed elevated liver enzymes in his blood which could have been caused by a reaction to his chemotherapy medication. The medical team did not want to risk permanent damage to Dylan’s liver, so his chemotherapy treatment ended early. Scans two weeks later showed no signs of active disease.

A childhood without cancer

“Dylan is doing phenomenally well,” says Nikki. “He’s himself. He has endless amounts of energy. It’s amazing to see him able to be a normal kid again.”

Dylan loves to play with other children, especially his older brother, Jake, who he likes to tackle. Jake’s karate class makes special allowance for Dylan to join them, though he is only 2 years old. Dylan loves singing and dancing, and is again eating with enthusiasm. His growth, weight and height are back on track with his peers.

“He wants to play nonstop — to be one of the kids and do what everyone else is doing,” Nikki says. “He’s fearless.”

Dylan will return to CHOP for scans every three months, and his parents are in touch with CHOP doctors with any questions or concerns they have between appointments.

While Nikki is glad Dylan’s intense treatment has ended, she does miss the camaraderie her family developed with Dylan’s medical team.

“They became such a part of our lives,” Nikki says. “They made the really long days not feel so long. They knew how to make us laugh and have fun in a situation with no fun in it. They went so far above and beyond.” And, most important, she says, “They saved Dylan’s life.”

“I have no idea what’s next for Dylan,” Nikki says. “He’s so young. But I know that whatever does arise for him, CHOP will be there for us. That is such a comfort. It makes the future less daunting.”