Seven-year-old Zoe Sabol loves to play soccer, dance and do everything else that the average second-grade girl enjoys. But her first year of life was quite different from those of many of her classmates. 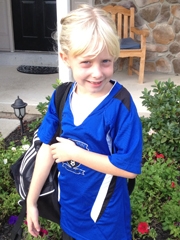 Zoe’s mom, Patty Sabol, was 20 weeks pregnant when an ultrasound revealed echogenic dilated bowel, meaning that her unborn baby had a buildup of fluid — a finding that raises concern for several potential disorders. Patty underwent an amniocentesis and genetic testing, which ruled out cystic fibrosis and other potential conditions her doctors thought might be contributing to the problem. After an extensive work-up, Zoe was diagnosed with a small bowel atresia.

Small bowel atresia, also known as intestinal atresia, is a cause of fetal bowel obstruction. It occurs when there is a disruption of blood flow to the intestine during fetal development, leading to intestinal blockage.

“Our referring doctor recommended we go to The Children’s Hospital of Philadelphia (CHOP) to confirm the diagnosis because the team at CHOP is so specialized and treats many more of these cases than any other hospital,” says Patty.

Patty and her husband Jack took the trip from their home in Perkasie, PA to Philadelphia, where Patty spent a day undergoing specialized imaging tests at the Center for Fetal Diagnosis and Treatment, including an ultrafast fetal MRI and high resolution maternal-fetal ultrasounds to get the most complete picture of Zoe’s condition. They met pediatric surgeon Holly Hedrick, MD, and her team, who confirmed that Zoe had probable jejunal atresia. In this type of small bowel atresia, the blockage is found in the jejunum, the portion of the intestine responsible for absorption of nutrients.

“We knew it would require surgery, but they really couldn’t determine how much healthy bowel was there until she was born,” recalls Patty. “We knew she’d need a fix, but didn’t know the extent of the damage, so we just had to wait.”

Because Zoe’s bowel wasn’t working properly, she couldn’t process the amniotic fluid the way babies normally do in utero. Amniotic fluid plays an important role in the development of fetal organs and its level is maintained by the combination of the fetus swallowing the amniotic fluid and subsequent urination into the amniotic cavity. Babies with a bowel obstruction, like Zoe, are unable to process the fluid normally, leading to fluid buildup that can be dangerous to both mom and baby.

Excessive buildup of amniotic fluid, a condition called polyhydramnios, may lead to pregnancy complications, including preterm labor. As her due date drew closer, the team moved Patty to Philadelphia to monitor her and Zoe closely with stress tests and ultrasounds.

Zoe was born a month early, delivered via C-section on August 30, 2005, at the neighboring Hospital of the University of Pennsylvania.

“The CHOP surgical team was there in the delivery room just in case Zoe needed immediate surgery, but she was relatively healthy and breathing on her own,” says Patty.

Today, babies like Zoe with prenatally-diagnosed birth defects, who might need immediate specialized care or surgery, have the option of being delivered in CHOP’s Garbose Family Special Delivery Unit (SDU). The SDU is the world’s first birth facility designed for healthy mothers carrying babies with known birth defects, offering comprehensive care in one location. 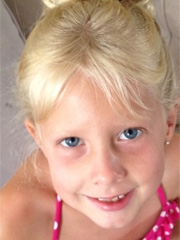 When she was just 1 day old, Zoe underwent a successful operation to reconnect the bowel, during which the surgical team (including pediatric surgeons, pediatric anesthesiologists and advanced practice nurses who specialize in caring for the surgical neonate) discovered that she had type 3B jejunal atresia.

In this type of atresia, the blood supply to the intestine is dependent upon retrograde blood flow from the inferior mesenteric artery, placing the remaining intestine at risk for feeding problems and further complications.

Feeding complications are common for babies with small bowel atresia. Because the intestine has been blocked in utero, it takes more time for the bowel to adjust. In addition, depending upon the type of atresia, there may be compromised blood supply which may make it difficult to tolerate feeds.

Babies with intestinal atresia are also at risk for secondary problems like necrotizing enterocolitis or problems at the surgery site due to the blood supply problem. Sometimes babies need to feed with a feeding tube instead of by mouth to ease the stress on the bowel.

Remarkably, Zoe loved to eat and the feeds advanced without difficulty. The multidisciplinary team of neonatologists, pediatric surgeons, nutritionists and advanced practice nurses worked with Zoe to make sure she was gaining weight and thriving before being sent home. With the help of the team nutritionist, Zoe was slowly introduced to each new source of food to monitor for any problems.

“Zoe’s progress was slow and steady, she moved at her own pace,” recalls Patty. “She went from an IV, to tube feeding, to a special formula. We took baby steps to see what she could tolerate, easing her into feeding. Each step was successful, it just took a long time to get there.”

Zoe returned to CHOP for frequent follow-up appointments to monitor for any complications, but her feeding progressed well.

At age 5, Zoe was hospitalized for constipation. The family returned to CHOP, where they reconnected with Dr. Hedrick, but thankfully Zoe didn’t require any additional surgery. After a few days in the hospital, she was ready to head home again.

“We were lucky; we were just an hour away,” says Patty. “I don’t think you can find better care for kids. If we had to, we’d move across the country for CHOP. You can trust that you’ll be given the best care — and the best emotional care. The entire team was wonderful. Not only was Dr. Hedrick right-on scientifically, but she knew who we were as a family.”

Finding out that your child has to have surgery can be a stressful, scary process. The Sabols’ advice: Don’t be afraid to ask questions so that you can be prepared, and stay positive.

“We were well informed every step of the way," Patty says. "Hold on to hope, be informed and be positive.”

A zest for life

Today, nothing holds Zoe back from doing everything other kids her age do, and more.

“Some kids with a small bowel atresia can’t tolerate certain foods, but Zoe loves buffalo chicken wings, salsa, anything with a little zest,” says Patty. “She is bright, hilarious, athletic, strong and stubborn. She’s all personality.”